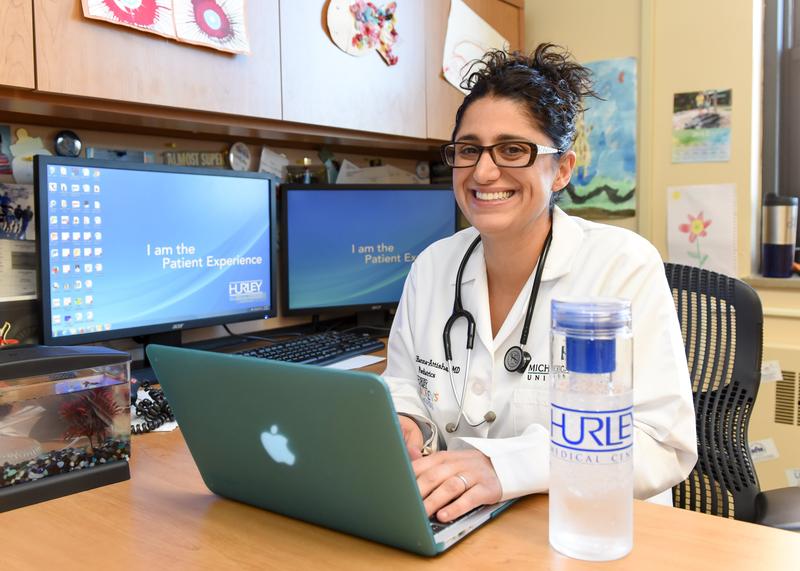 Every year, Michigan Humanities chooses a book themed in their field to be read across the state. With the help of regional organizations, they aim to bring Michigan together through literature. One of the Great Michigan Read program’s many partners is the Kutsche Office of Local History here at Grand Valley State University. According to Kutsche Office Director Kimberly McKee, this year’s book selection exemplifies the goals of their department.

“It ties into the existing work the Kutsche Office is doing with our Connections Along the Grand River project, as well as local history’s role in understanding environmental justice and racism,” said McKee.

What the Eyes Don’t See by Dr. Mona Hanna-Attisha shares the story of how the Flint residents worked tirelessly to expose the dangers of Flint water after months of being ignored. While providing details about her own life, Hanna-Attisha explains her role as a pediatrician and how she used her strong connections with the Flint community to allow for their voices to be heard. In addition to explaining the timeline of the Flint water crisis, the book explains the history of Flint and the events that paved the way for the tragedy.

As a book club, Great Michigan Read gives readers the opportunity to gain more insights about the book by discussing it with others, developing a deeper connection with the text. It also gives them the opportunity to hear other people’s thoughts and interpretations of the reading, expanding their horizons with new perspectives.

The book club began on Monday, Feb. 3, when participants discussed their thoughts on the book’s first seven chapters. Topics discussed ranged from the social, economic, environmental, political and racial factors that led to the Flint Water Crisis, as well as the blind trust constituents give their government officials to make the decisions that are best for them. Another important conversation was the role of government officials, both elected and otherwise, and how their backgrounds affect their decision-making. Dominating the discussion was the lack of action taken by Flint officials after complaints about the water arose, and how the racial demographics of Flint influenced the longevity of government silence on the crisis.

To get involved with Great Michigan Read, students, faculty and staff are encouraged to get a hold of the book and attend future book club meetings. On Monday, Feb. 24, the club will talk about chapters 8 through 16, and on Monday, Mar. 16, chapters 17 through 26 will be discussed. In addition, Hanna-Attisha will host a talk discussing the book at Grand Valley at 6 p.m. on Tuesday, Mar. 24 in the DeVos Center’s Loosemore Auditorium, followed by a book signing.