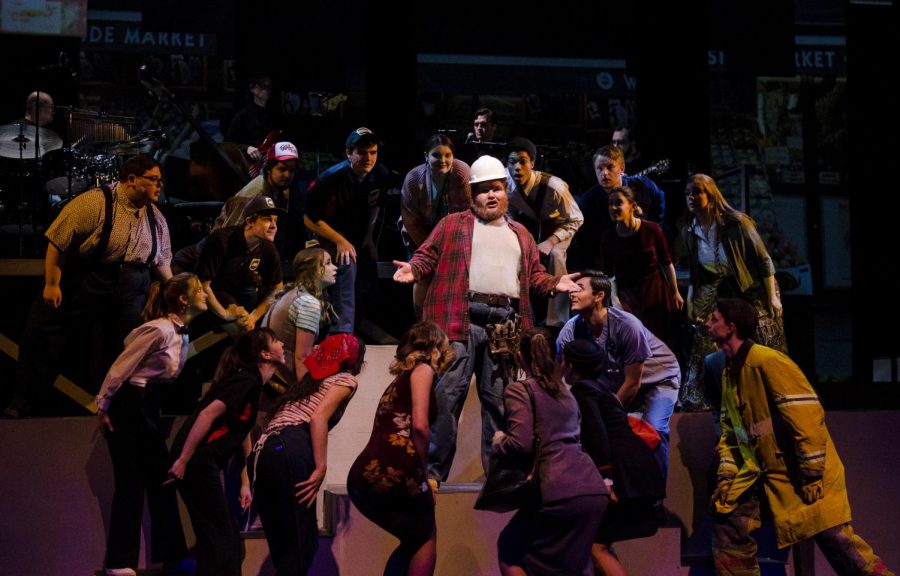 This winter, the Grand Valley Opera Theatre performed “Working: A Musical” six times throughout the second and third weekend of February in the Louis Armstrong Theatre, located in the Haas Center for Performing Arts.

The musical followed an episodic format and was based on a book written by Chicago author Studs Terkel in 1974 called “Working: People Talk About What They Do All Day and How They Feel About What They Do.” In his book, Terkel uses interviews to explore the meaning of work for people from different walks of life and how it affects them.

Show producer Dale Schriemer said the show was important because of its focus on the humanity of people instead of the labels placed on them due to their line of work.

“(The show) is talking about how one’s job doesn’t define who one is,” Schriemer said. “The humanity and the yearning of an individual are not defined by their job. They’re people first. They do take identity from their jobs, but they are not their jobs, which I think is important for us in this society — to really get to know people instead of putting labels on people.”

The performers valued this aspect of the show as well. Actress Elise Endres said that in order to better understand their characters, each cast member was required to read the entire interview of the real person their character was portraying in Terkel’s book.

“The realness of this show is something that really sets it apart from previous shows I have been in,” Endres said. “Everything everyone said was something someone actually said at one point in time, so that in itself was honestly kind of a game-changer for me. I wasn’t just being a character someone thought out and created, I was being a real person with real experiences, thoughts and actions that happened to get interviewed at that point in time of their life.”

Actress Emily Emerson was also very excited to be playing a real person with such raw experiences.

“Shows I’ve done in the past are usually in a fairy tale setting, these stories never really happened in life,” Emerson said. “But, my character in ‘Working’ was alive. She existed and felt these emotions about her everyday life. That’s something that’s absolutely amazing to me, and I feel honored to get to tell her story to other people.”

The show’s director and choreographer Ericka Mack was called into GVSU from her hometown of Chicago to begin the audition process for the show in September when the school year began. Mack said she was very excited to be given the opportunity to direct this show, as she was an actress in her high school’s performance of it.

“We won a theatre competition with this musical, so it’s very special to me,” Mack said. “They updated the show in 2012 so there are new songs and characters which is fun for me. Since it was a different version of the show, I had fond memories of my production but also got to work on the new material in the show.”

Mack said that throughout her 25 years of experience in the theatre, college students have become her favorite age group to work with because of their constant strive to be better.

“College students are my favorite because they’re so eager and enthusiastic and super smart,” Mack said. “I see the students really progress from the beginning to the end of the process, but they really grow because of their enthusiasm.”

Prior to full cast rehearsals beginning in January, the performers were given about two months to prepare all of their music and lines for the show on their own.

“It took me a lot of work to memorize lines, music and choreography on my own because you only have a month to put it together,” said actress Megan Ireland. “But you’re essentially memorizing 90-plus minutes of stuff. “There were a lot of days I sat in my room reviewing choreography videos to make sure it became like second nature.”

Official rehearsals for the show began Jan. 3, shortly before classes were back in session Jan. 6 after winter break. Throughout the course of these three days, the cast had rehearsal every day from 10 a.m. to 6 p.m.

Once classes were back in session, rehearsals took place five days a week every Monday, Tuesday, Thursday, Friday and Saturday for three hours each day. During these times, the performers would work on music, scenes with their director or choreography.

But rehearsal did not end when the performers left the auditorium. Many of the students spent extensive hours at home perfecting their work outside of their allotted practice times.

“When I came home from a rehearsal, I usually ran everything we did in the rehearsal again in my apartment, just so I don’t lose sight of the material we learned that day,” Emerson said. “I sang through my songs in the shower, or sometimes listened to the Broadway recording of the show if my voice was feeling particularly tired that day.”

With countless hours dedicated to constant rehearsal, the cast and crew were thrilled to be given a  standing ovation the night of their first performance.

“Opening night was stellar,” Schriemer said. “There was a very enthusiastic response to the show. The energy was very high and there was a sense of excitement on the stage that was so appealing.”

Ireland said that since opening night, audience members have told her many positive things about the show.

“I’ve heard great feedback from people who came,” Ireland said. “A couple of people have even told me it’s their favorite show they’ve ever seen at GVSU, which is a huge compliment.”

But, no matter how successful the opening was, Schriemer said the performers used every show following to improve and perfect their skills.

“The reason I do six performances is that it’s a living laboratory of learning,” Schriemer said. “You can’t fail onstage, you have to succeed. It forces you to succeed. So you’re watching people figuring out how to succeed and they’re enlarging on their own ideas and capacities.”

Not only are the performers learning how to improve their individual performances following shows, but Schriemer said the set up of the show is also a great learning tool for the students. He said that even though there were 20 cast members in the show, each of them got about an hour of stage time throughout the 90-minute show.

“One of the strongest things about this show is it doesn’t have a narrative,” Schriemer said. “Everybody got a chance to do something very specific and have their moment in the sun. If they’re not singing harmonies behind someone they are the person who’s speaking, who’s singing, who’s dancing. I think this show is an amazing way to train young performers. This particular show has amazing opportunities for young people.”

“This show sends out an excruciating message that I think everyone needs to hear,” Emerson said. “Everyone has to work, that’s just life. But to empathize with other occupations, and see the hardships each individual faces — I think audiences will genuinely leave having more appreciation for what other people do. In this day and age, you have to work. Sometimes that job is your lifelong dream, and most times that job is what pays the bills.”

Mack felt that the most important message to take away from the show was that no matter what your occupation may be, you are still important to the world around you.

“It’s relatable to the people in our audience because the characters are speaking their stories and it’s about the American workers,” Mack said. “Living in America we can all see a part of us in those characters and why they do what they do. Be proud of who you are, and know that you make a difference in the world even if it feels like you don’t.”