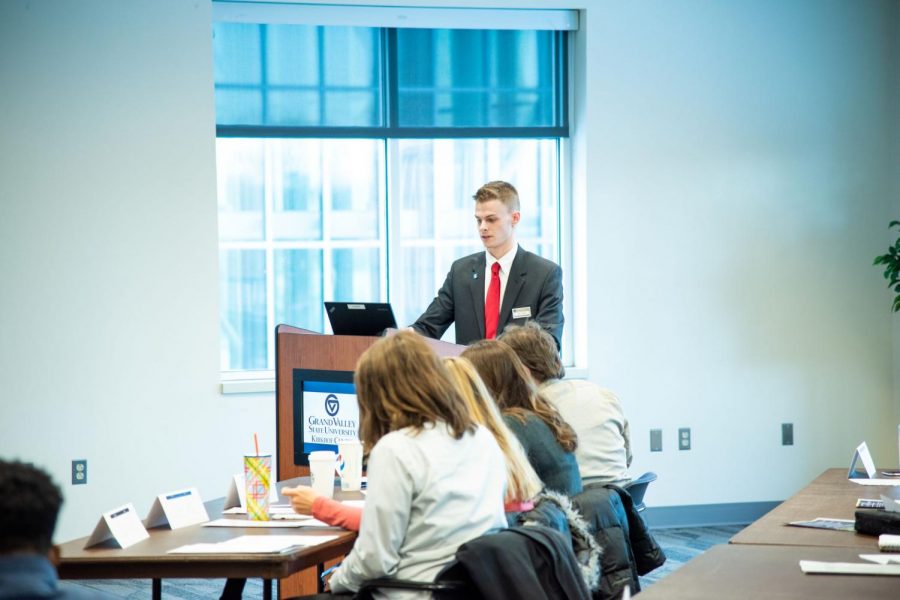 “Those students are working on a film project about Student Senate and how to better connect students with the work that we do,” said Student Senate President Eric-John Szczepaniak.

Szczepaniak said every Student Senate meeting is open to the public, including for recordings. After all, he explained senators are public officials who hope they are serving students’ best interests to the extent of inviting anyone to general assembly.

After filming the Senate meeting, the production crew interviewed Szczepaniak along with senators Grace McMahon and Autumn Mueller. All three were asked whether they believe a disconnect between students and Student Senate exists. Later, they explained how Student Senate is mitigating the disconnection.

Sometime during the filmed interviews, the Student Senate Climate Survey was brought up. Vice President of Senate Resources Hannah Benoit said the survey occurs annually, though she mentioned not much discussion of it occurred in earlier years. Therefore, she and the Senate Resources Committee sought to give the survey greater meaning this year.

Benoit said her committee wanted the questions to be as thorough as possible. Many questions were taken from the myGVSU Climate Survey. The survey also featured options instead of open-ended questions as Benoit explained this allowed for better feedback from surveyed senators. Answers included numerical ratings and demographics.

For instance, around 41 percent of senators involved in the survey said they major or minor in political science. Additionally, about 80 percent of participants identified as white. For gender, over half of the surveyed senators specified being women. Even religion was covered in the survey; over 82 percent of respondents said they either practice Christianity or are not religious.

Szczepaniak said the results show Student Senate can do better on diversifying membership. The survey has suggestions for improving the Senate, including limiting how many political science students can serve as senators. Senator Joel Pagel, though, said he would be weary of putting a cap on majors. Instead, Pagel recommended telling students of other majors to join Student Senate.

As for implementing any changes from the survey, Benoit said a majority vote in the constitutional task force (CTF) is required. The Senate’s executive vice president leads CTF while each committee contributes two delegates to the group. CTF reviews the Senate’s internal documents, including bylaws and the constitution, for possible updates.

Benoit said it is important to have many voices heard at CTF meetings, despite the structure of two delegates per committee. As such, other senators are invited to attend and comment on items from the internal documents.

Beyond the survey, Student Senate discussed W-20-03 one more time before voting. Szczepaniak asked whether any changes occurred to the resolution since the Feb. 13 meeting. Pagel said it is still the same resolution. For example, the document retains “a sufficient number of member student governments” for ratifying the Student Coalition for Higher Education Funding (SCHEF). Come voting time, Student Senate overwhelmingly approved W-20-03.

In addition, Student Senate talked about W-20-04 on creating a task force for looking into menstrual hygiene resources for GVSU students. Szczepaniak said the task force would identify the costs and locations for advancing menstrual hygiene product availability. W-20-04 will be voted on next Thursday.

Student Senate Week is also scheduled for the week before spring break, and it highlights the work of Student Senate committees. Szczepaniak mentioned Succulents, Senators, & Sustainability on Feb. 24 will help students learn about sustainability practices. Furthermore, students can paint pots and take home plants with the Campus Affairs Committee.

As for the larger issue of disconnect with students, Szczepaniak said the question of mitigating it is at the top of the minds of senators. He mentioned it is a busy time to be college students, and Student Senate has the job of meeting students where they are at.  It is not enough to expect students to approach senators with their issues, Szczepaniak said.

“We’re still doing the research,” Szczepaniak said. “We’re still trying to figure out what it is that our peers are passionate about.”