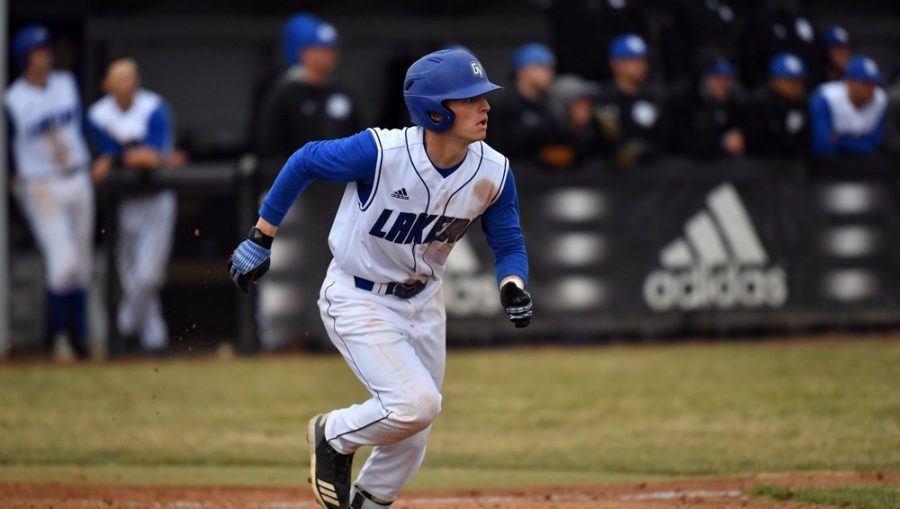 Spring Break was last week for Grand Valley State University, and while most students have gone home to see their families or traveled to warmer weather, Grand Valley State’s baseball team (10-3) is no exception. They traveled down to Florida for the Russmatt Invitational to take on a variety of teams.

On Sunday March 1, the team took on the University of Findlay (5-6) in a double header. GVSU won both games 9-3 and 6-2. After trailing by a score in the top half of the second inning during the first game, GVSU’s bats caught fire scoring seven in the bottom half of the inning.

Junior outfielder Spencer Nelson, senior catcher Ryan Blake-Jones, senior catcher Connor Grice and freshman outfielder Nathan Logan each recorded an RBI during the inning. After Finlay scored two more runs during the top of the third and fifth, infielder Anthony Cocco had a two run double to keep the Lakers on top. Redshirt junior starting pitcher Nick Shaw picked up his first win of the season (2-1), while tossing three strikeouts and one earned run in 5.1 innings pitched.

In the second game of the day, junior starting pitcher Ben Thomas (2-1) had an outstanding performance. He barely missed out on throwing a no hitter after a two out hit by Finlay. He ended the contest with seven strikeouts and only allowed two runs in the final inning after Lakers were up by six.

On Monday, March 2, the Lakers again had a double header. This time they faced West Virginia Wesleyan College (1-15). GVSU again won both contests. In the first game GVSU won 5-3. Sophomore starting pitcher Sam Leck won his first game of the season (1-0) as the team came out on top, 5-3.

Both teams went scoreless in the first five innings of the game. The Lakers scored first in the sixth inning. Cocco reached third on a triple and junior infielder Jordan Chandler was walked and stole second. Junior infielder Blake Vershum came to the plate and laid down a perfectly executed bunt to score both runners on base.

GVSU put on a hitting clinic in the second game of the double header. GVSU won the contest 18-2. Freshman pitcher Austin Brown (2-0) got his first win of the season allowing only two runs and throwing five strikeouts. Chandler led the team with three RBI’s after blasting a three run home run in the second inning.  Freshman infielder Anthony Fleischauer and Logan led the team with two hits each. Nelson and junior infielder Christian Faust each stole a base to complete the sweep against Wesleyan.

The following day, the team took on Tiffin University (8-2). GVSU suffered their first loss of the tournament, 14-2. The pitching the team had seen the previous four games of the tournament wasn’t there. Junior starting pitcher Mark Scannell suffered his first loss of the season (0-1), while giving up five runs in three innings. Senior infielder Parker Murdie and senior outfielder Jonathan Catapano were the only players to post an RBI for GVSU during the game.

GVSU bounced back however to next day against Findlay. The team won 12-7 and was their third consecutive victory against Findlay in the tournament. After trailing by three runs in the first inning, the Lakers’ bats came alive. They scored eight consecutive runs during a four inning period to make Findaly’s deficit too high to battle back.

The Laker baseball team got a day off on Thursday. Coming into a double header against the University of Minnesota Duluth (2-3), the team was well rested and won both contests. The Lakers won the first game in the series 7-4. Thomas picked up his second win of the tournament striking out five batters and Barno earned his third save of the season. Barno pitched a scoreless seventh inning to secure the Lakers win.

The next game of the series was another Lakers win 5-0. Shaw looked fantastic on the mound shutting out Minnesota in six innings and striking out 14 batters. His performance tied a school strikeout record set by Kyle Teague in 2013. Senior infielder Nathan Bonter was a force on offense during the game driving in three runs. Blake-Jones and Faust also recorded RBI’s in the Lakers victory.

Sioux Falls improved on their performance in the second game. They got on top of the Lakers early 4-1 through the first two innings of the game. Bonter and Logan brought things closer in the third, bring the score to 4-3 after RBI singles. However, Sioux Falls scored four more points by the end of the sixth inning. Pim knocked a runner in after a single to center field but it was too late for the Lakers. Sioux Falls scored two more in the seventh, bring the game total to 10-4.

Through March 7, GVSU posted an impressive 8-2 record during the tournament over Spring Break. The team showed excellent flashes on offense and control from the pitching staff. Chandler blasted two homeruns over the week showing his power with the bat. Shaw also had his incredible outing, tossing out 14 batters, and gave the Lakers one of the most amazing pitching performances they’ve seen in the past few years.