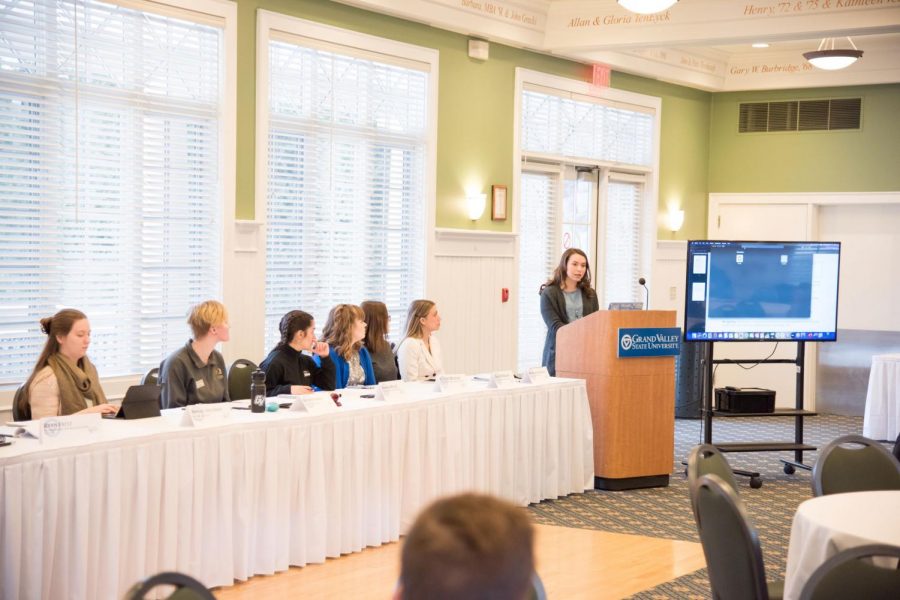 Dowker said she is comfortable with chairing Student Senate meetings because she has done this before.  For example, she oversaw a meeting with substantial public comment about the motion to remove the Pledge of Allegiance.

Rapin said the app is like artificial intelligence. It provides answers that are updated in real-time as more information is added. However, he mentioned the app is still learning (with questions it may not be able to answer yet). Rapin asked it how many times GVSU has won Battle of the Valleys. The myLaker app replied without a conclusive answer to the question.

Vice President for Enrollment Development Lynn “Chick” Blue said the app has over 52,000 answers, though much work remains to be done. Blue mentioned the task for Student Senate is to ask colleagues about the app, and senators can email her ideas for it.

At one point, Senator Alex Hicks said the Information Technology (IT) HelpDesk receives many non-IT related questions. In response, Blue mentioned being interested in hearing about some of the ridiculous questions.

“This is a direct student-to-administration-and-faculty contact, cutting out kind of the middle man for a lot of different departments not just in it, I think,” Dowker said.

Senator Gavin Marlowe then brought up W-20-05 for organizing a climate emergency task force to achieve carbon neutrality by 2030. Some people, though, conveyed concerns about the resolution. Associate Dean for Student Life Bob Stoll said Student Senate needs to work on building partnerships; Stoll mentioned his colleagues say they are not being told about Senate resolutions.

Dowker explained it is important for Student Senate to be in contact with GVSU administration and staff. After all, she said the Senate is not an autonomous body. Senators work with university officials toward the same goals.

Furthermore, Dowker said the External Relations Committee formerly dealt with state funding. However, the Board of Trustees clarified Student Senate is not necessarily allowed to lobby for funds. More specifically, the Student Coalition for Higher Education Funding (SCHEF) is independent from Student Senate. Senators only needed to ratify W-20-03.

W-20-03 includes a provision for Student Senate to appoint SCHEF delegates from GVSU. While Dowker said it would be preferable to appoint senators in these roles, this is not necessary. Any GVSU student can become a SCHEF representative.

“It’s a nice way for us to work together with other universities without doing something that we’re not allowed to do by the university,” Dowker said.

After the general assembly wrapped up, the constitutional task force (CTF) met to review updates to Student Senate’s constitution and bylaws. For example, CTF members discussed whether to have Finance be a standing committee. Instead, the group decided to have each committee contribute delegates to the funding boards. These boards allocate the Student Life Fund.