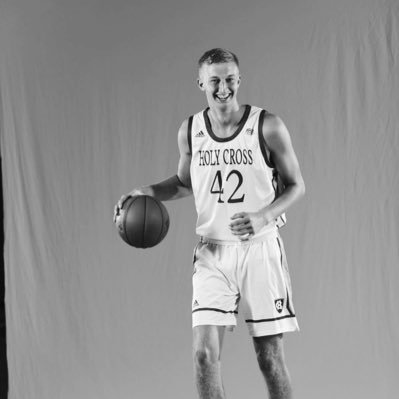 Verbeek’s father, Nate Verbeek, is a former Laker basketball player. In his time at GVSU, he scored 1,394 career points and currently ranks 12th in all-time scoring for the program.

It will add something unique for Verbeek when playing on the hardwood for his new home that not many kids ever get the chance to experience.

“My dad never really pressured me into going to Grand Valley, but it was always in the back of my mind that he played there. It’s a cool thing to be able to play where he played, and go to school there as well.” Verbeek said. “It came down to a lot of things (deciding to transfer from Holy Cross), coaching change was a big deal, a lot of my teammates and kids in my class were also transferring. I thought it would be a good time to get a change of scenery in a different situation, and kind of set the restart button. Grand Valley was always high up on my list, as far as location. I had a lot of talks with a lot of different schools, but when it came down to it, Grand Valley was the best fit for me.”

Verbeek was a dominant force in the Grand Rapids area during his high school career for Calvin Christian, leading them to a state finals appearance as a sophomore in 2016. In that finals game, he put on a show with 22 points and 11 boards with an impressive showing of his outside shooting ability, going 5-6 from behind the arc.

His senior year, Verbeek was first-team all-state while he averaged 19 points and 7.5 rebounds per game. He continued showing his outside shooting ability with a 42 percent average from beyond the arc on the year.

Verbeek plans to help contribute with his length and ability to stretch the floor so he can help the Lakers continue their success from last year.

“At Holy Cross, we struggled for our last couple seasons, and I want to be somewhere that is thriving to win, and winning right now. That’s Grand Valley,  and I see that in the future as well.” Verbeek said. “That really pushed me over the top, and this is where I want to be, I want to be winning games, I want to be fighting for championships. Obviously, height is a big deal, but I think I’ll bring a more dynamic player. Someone who is tall but also who can shoot the three and is able to stretch the floor and give more offensive options for my teammates, and I’m excited to see where it goes.”

There seems to be a trend for Coach Wesley and the Lakers this off-season when it comes to the criteria needed to receive a spot on the team: hard work. Verbeek has never stopped working hard to better his game, even with a global pandemic happening.

“I’ve been lifting five days a week at Power Strength Training the past couple of months, and then I have a hoop at my house that I’ve been working out at with my dad doing some things.” Verbeek said. “I’ve been staying in pretty good shape throughout this whole pandemic, but I’m ready for team workouts to start back up for sure.”

With another transfer for the Lakers–this time a big man– it is only looking up for the upcoming season. With a strong incoming class, and returning players with the same mentality as Verbeek to achieve one goal: win as much as possible.