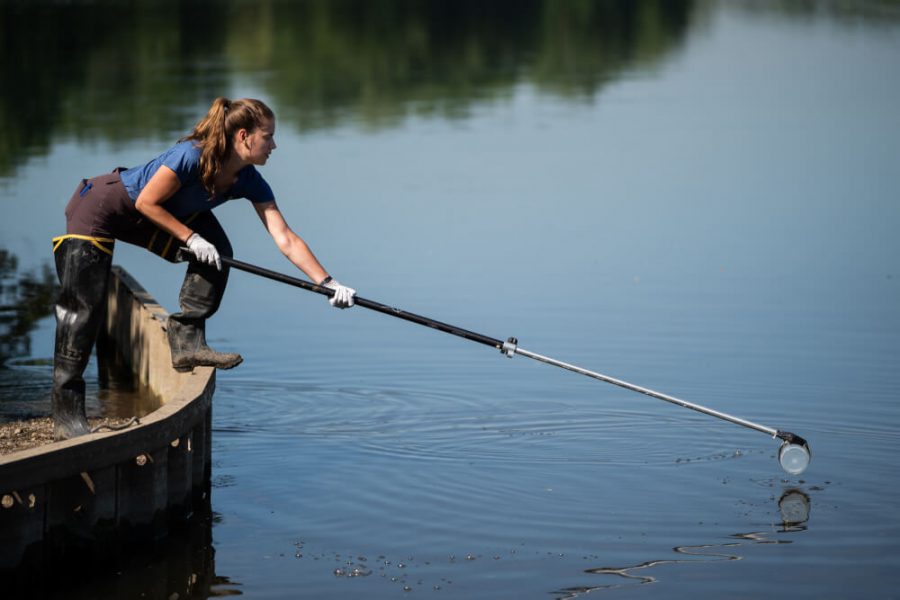 Courtesy of Amanda Pitts (via GVNext)

One of the many events that was postponed this year by COVID-19 was the Grand River Expedition, as researchers from Grand Valley State University and other local groups gather every ten years to assess the water quality of the Grand River while shedding a light on its importance in the state of Michigan.

Even though the official event was postponed to 2021, geology professor Peter Wampler and fifth-year GVSU student Jillian Ashton decided to make lemonade out of river water, as the pair was joined by assistant geology professor Tara Kneeshaw to conduct an expedition of their own as research for the Student Summer Scholar Program.

“We were going to piggyback on that expedition (for our research) this summer, but it got canceled because of COVID-19,” Wampler said. “So we did a modified version of it. We basically did a lot of sampling by vehicles and some by boat over the last couple of weeks.”

The most interesting finding that Wampler and Ashton had after gathering and analyzing their findings was that due to the bacteria in the waste, in most areas, the quality of water has improved in significant ways.

“A lot of these water quality parameters tell us a lot about the health of the river and its status,” Wampler said after analyzing human and animal waste found in the river. “One of the things we found is that that that number has gone down pretty dramatically from 1990, which is a good thing. Some of that’s probably due to pretty significant changes in the way we treat sewage and how much sewage we released to the river, as all the cities along the river have improved the amount of sewage that they put on the river.”

Wampler and Ashton have summarized all of their findings in an over 2,000-word abstract after using multiple methods of sampling to find results, as Ashton explained.

“At each site, we would do periodic sampling and then continuous sampling,” Ashton said. “We had this flotation device that’s basically like a little kid floaty, and that would take us into our important stats like temperature and pH. The second part at each site was to take that periodic sampling. We would take a beaker of water, put those in different bottles, and analyze those bottles for nitrate phosphate, chloride and also E.Coli.”

Ashton found all of this research fascinating, as she wants to conduct more of this freshwater research once she graduates in December to protect the water systems she has loved for a long time.

“I know ever since I was little, I just always loved the outdoors,” Ashton said. “It was like the only thing that really made sense to me. Honestly, I’ve always been passionate about it and I really just can’t see myself doing anything else. I like being able to be out in the field, in nature, but also knowing how to be sustainable play my part in protecting ecosystems that need our help.”

Ashton and Wampler plan to keep analyzing the data and distribute the findings at the Geological Society of America virtual research meeting in October.