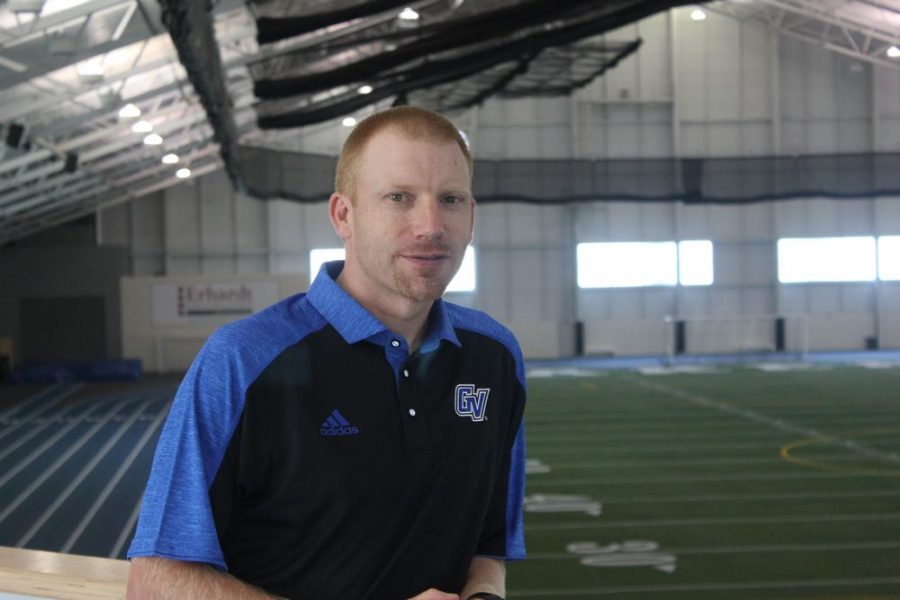 When it comes to success in sports, not a lot of coaches can say they have accomplished as much as the head coach of the Grand Valley State University cross country and track and field programs, Jerry Baltes. Baltes showed the epitome of success so much that he even had an award named after him: The Jerry Baltes Division II Program of the Year Award. He’s won seven of them.

The road towards having an award with his name on it started from a young age.

After graduation, Baltes started his college athletics career as an athlete himself. He was a four-time letter winner and captain of the cross country and track and field teams at Butler University. After graduating with a Bachelor of Science degree in secondary education-physical education, Baltes began coaching as a graduate-assistant for Butler.

“I decided I wanted to give it a shot,” Baltes said. “Fortunately, our head coach at the time at Butler, Joe Franklin, welcomed me and took care of me. It was a great situation and a great opportunity that put me in a position to get here.”

After getting his foot in the door at Butler, Baltes was hired at GVSU at just 24 years old where he got the opportunity to take over and lead the program. Twenty two years later, that opportunity has proved to be worth it for the Lakers. Since being hired, Baltes has had 11 championship teams and has led GVSU to 11 out of 12 cross country, indoor and outdoor track & field GLIAC championships. He has also won 65 GLIAC Coach of the Year titles and trained 200 All-American athletes for a combined 788 All-American honors.

Even though Baltes has a list of awards to fill a phone book by himself, he doesn’t give himself full credit.

“At the end of the day, it’s cooperativeness of everyone being on the same page and working together,” Baltes said. “Support from the administration, great assistant coaches, great athletic training and ultimately we get great student-athletes.”

Although cross country and track and field seem to be more individual sports, Baltes has a theory on how to use that itself to help the team overall, and it appears to be a recipe for success.

“One thing we talk about is finding a greater purpose than your own self,” Baltes said. “I mean sure you have to take care of business as an individual competing, whether it’s running or throwing or jumping, you ultimately have to take care of business. But finding that extra motivation from within for others around you, whether it’s teammates, or coaches, maybe even something outside of sports. We try to find a greater purpose in what we are doing.”

For Baltes and his staff, they certainly love to compete and win championships. But when it comes to achieving that success, Baltes believes that when his team looks outside of themselves and not just compete for themselves, or train for themselves, that they will find that greater purpose and be more successful overall.

Baltes has shown his dedication to the program and his ability to squeezing every ounce of potential out of athletes. Being a head coach of two different teams may seem like it would have an incredibly large workload, but Baltes isn’t doing this alone.

“It’s one big picture in our program,” Baltes said. “Our program is three different sports, but its melded into one. It’s a continuous process. I rely heavily on my assistant coaches to take care of their event groups in track and field. I turn the keys over to them and give them the responsibility and the opportunity to lead, recruit, coach, and mentor their event group at the highest level possible. I’m, of course, there to support, but ultimately they’re the ones getting the jobs done on a day-to-day basis.”

The Jerry Baltes Division II Program of the Year Award is accurately named. Baltes doesn’t look at any awards, individual or not, as a reason to feel good about himself, or as an addition to his legacy. He looks at them as a badge of honor for everyone else who helped him get there.

“Awards are great, but awards are because of the people that you surround yourself with,” Baltes said. “That award is a staple of our program, not me.”