Students line up to vote for hours on Election Day 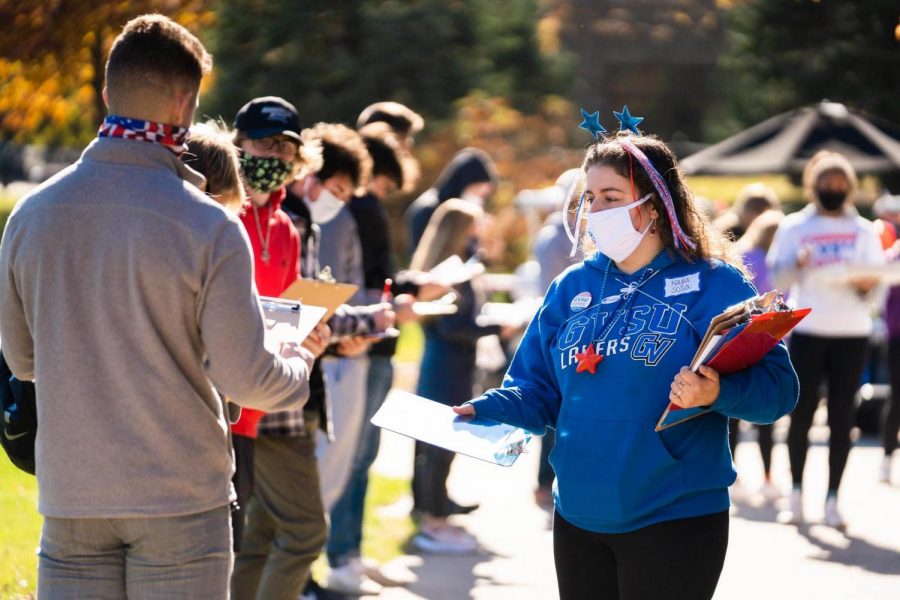 This year’s presidential election has proven to be a historic one. Voter turnout exceeded all expectations, being higher this election than in any other of the past century. President Donald Trump and now president-elect Joe Biden have each broken voting records, receiving record amounts of votes. Michigan once again asserted its status as a swing state, flipping from supporting President Donald Trump in 2016 to supporting Biden.

Grand Valley State University students participated in this historic election right here on campus. Thanks to the opening of a new Allendale Township Satellite Clerk’s Office in the Russel H. Kirkhof Center, students did not have to go far to perform their civic duties.

“This is the first year that we have this satellite office here in Kirkhof, so I’m glad that people are using it, and that things are going well,” said Eric-John Szczepaniak, election volunteer and former Student Senate President. “It’s been a long line all day, but it’s been great. We’re excited to see so many students out here, taking advantage of this opportunity. It’s super important that everyone has their votes cast, and this office here is a great place for students to do that.”

Many students took advantage of the new on-campus polling station, lining up to vote throughout election day. At 5 p.m., no one else was allowed to join the voting line, but by then, the line already stretched back by many dozens of people, each of whom was determined to stick it out.

“It was warm when I got here, and now it’s cold,” student Chiara Nicholas said, while the sun set behind the Kirkhof building. “I’ve already been waiting here for fifty minutes, but I’m here to vote. This is a critical election. Everybody should be able to use their voice like this.”

Most of the other students were quick to agree that this was a crucial election, and they were here to be a part of it. Despite the encroaching cold, no one in the line stepped out to leave, or lost patience.

“I came here to vote. I think that it’s pretty important,” said student Derek Jakielek. “I only made it just in time before they closed the station. It was a little difficult running over here, I’ve actually got a foot injury. But I’m withstanding the pain for democracy. This election is too important for me to sit out.”

There was certainly a sense of duty for the students who sat in line, with the tail end finally getting to cast their votes near 7 p.m.

“As my older sister always says, you have to use your voice, and use your vote,” student Gary Branch said. “There’s a lot of folks out there that aren’t able to use their voice, so I’m here today because I got to use mine.”

As the evening grew colder, the students waiting outside were escorted into the building, still as determined as ever to make it to the polling station. The line dwindled slowly as students walked in and out of polling station one at a time.

“The students have been wonderful and patient,” volunteer Samantha Minnis said. “It’s nice to see so many show up and vote.”