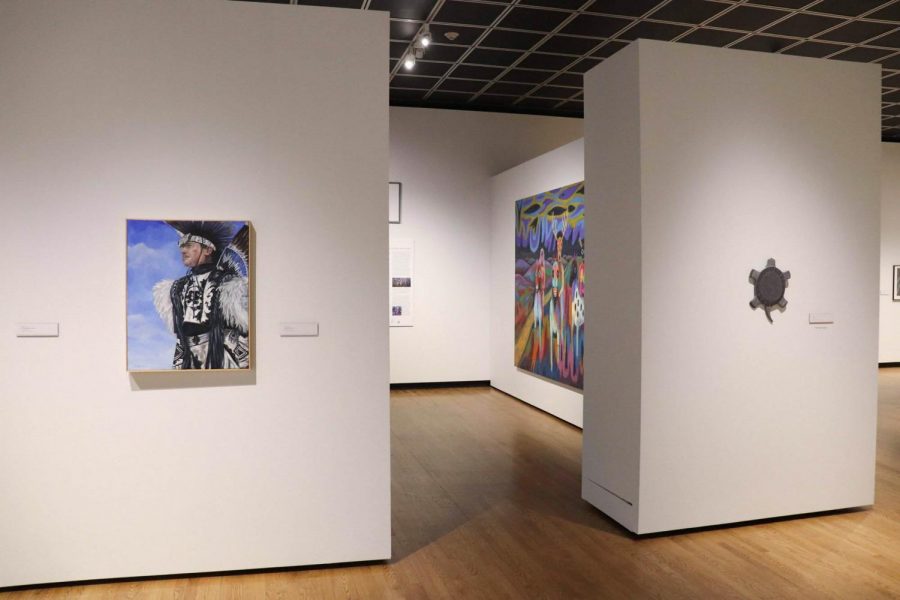 Courtesy of the Muskegon Museum of Art

Beginning on Jan. 11 and continuing through the end of February, a joint exhibition between the Grand Valley Art Gallery and the Muskegon Museum of Art will be taking place.

Highlighting Native American contemporary artwork from eleven different artists, the exhibition, “The Art of the People: Contemporary Anishinaabe Artists,” is showing at both galleries concurrently.

The overarching theme behind the exhibit is a continuity of cultural heritage that involves using art to tell the stories of the Anishinaabe people and their history.

The exhibit at the Grand Valley Art Gallery is being held at the Haas Center for Performing Arts and incorporates artwork with themes of identity, social justice and Native American studies.

Some of the featured artists chose to work in culturally traditional ways of artmaking, while other artists chose to produce art in a more contemporary manner; thus creating an exhibit full of paintings, photography, beadwork, ceramics, jewelry, drawing, fibers and basketry.

Although the exhibit is set up in two different places, both showings are able to give attendees a glimpse into the art-making traditions of the Anishinaabe people.

Art Martin, Director of Collections and Exhibitions and Senior Curator for the Muskegon Museum of Art, said the different styles of artwork featured in the exhibits help to make the experience unique for everyone.

“With both traditional and contemporary inspirations, these artists are telling stories that resonate with people of all backgrounds,” said Martin.

Martin said the idea for the exhibit came about in 2014 when Jason Quigno, the guest curator for the exhibit, proposed the idea during a previous event the Muskegon Museum of Art had organized.

But, it wasn’t until 2017 that plans were set into motion.

“In 2017 the Muskegon Museum of Art worked with Native American artists, scholars and tribal leaders to develop programming around Edward Curtis’s ‘The North American Indian,’” Martin said. “As an outgrowth of that programming, we contacted Jason and began to put together ‘The Art of the People.‘”

Martin said the decision to collaborate with the Grand Valley Art Gallery was an easy one to make.

“(The Muskegon Museum of Art and the Grand Valley Art Gallery) had both been in conversations with Jason Quigno about putting together a show of this kind, so it made sense to bring our institutions together,” Martin said. “With different audiences and resources, we bring greater attention to these artists and their work.”

Martin said he feels that the exhibit has the ability to unify the people who see it by educating them through different cultural perspectives.

“Bringing these perspectives to our audiences, along with the words of the artists, helps to break down assumptions and stereotypes, and hopefully make audience members more open to different points of view and life experiences,” said Martin.

Martin hopes that when attendees leave, they take with them a greater understanding of Native American cultures.

“Native American and mainstream U.S. cultures have clashed throughout our shared history, so anything that brings greater understanding is critical,” Martin said. “The works in the show highlight the enduring strength of Native American cultures and that, as a people, they remain vibrant and creative.”