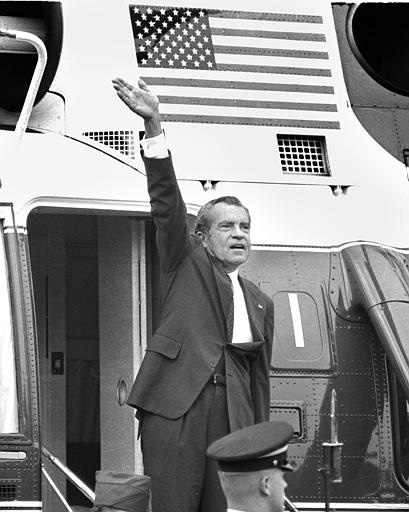 Surrounded by scandal and a second impeachment, United States President Donald Trump has drawn many comparisons to another Commander in Chief in the final days of his office: Richard Nixon. According to a report from CNN on Thursday, Jan. 14, a few inside the White House have paralleled these two Presidents as well, leading to Trump reportedly banning even the mere mention of Nixon (and the possibility of resignation) from the mouths of his advisors.

While Trump is the first president to be impeached twice, Nixon was the first and only president to resign from the office. The New York Times has suggested that the closest historical analogue Americans may have for the approaching Trump post-presidency is that of Nixon’s — a president who left Washington to avoid being impeached in a time of scandal and disgrace for the office.

The resemblance may not be perfect, however. According to those who’ve studied his life, Nixon felt remorse and regret for his actions in the years following his presidency, developing a sense of responsibility as a statesman that led then-President Bill Clinton to praise Nixon after his death in 1994. One historian making the case for Nixon’s reform is Kasey Pipes, a former advisor to both President George W. Bush and Governor Arnold Schwarzenegger.

“Nixon had come full circle and people had accepted him again,” Pipes argued in the Times article. “It’s going to be much more difficult for Trump to achieve that level of public acceptance and the main reason is that we haven’t seen any public accountability from him whatsoever. And if we know anything about Trump, I don’t think we will.”

Last December, Grand Valley State University’s Hauenstein Center for Presidential Studies hosted Pipes for their final event of the Fall 2020 semester, “The Resurrection of Richard Nixon – Our Elder Statesman.” Over the Zoom seminar, Pipes discussed Nixon’s post-presidential career, a subject on which he has recently written the book “After the Fall: The Remarkable Comeback of Richard Nixon.”

“(Nixon) falls as far as a human being can fall,” Pipes said in his opening remarks. “He has to find something he can do, useful, for the rest of his life. He begins to crawl his way out of the abyss (…) not politically, in the sense that he was never going to run for office again, but in the sense that he mattered again.”

According to Pipes, Nixon forever changed what the ex-presidency could look like in the United States.

“When Nixon left office, there was really no guide for him,” Pipes said. “If you look at some of his predecessors — with the exception of Herbert Hoover — there’s really nobody who went off and did something significant after he left office. Most of these folks followed the George Washington, Cincinnatus model of returning back to being a citizen.”

Nixon didn’t necessarily have a citizen life to return to. Disbarred in New York and California, Nixon had no obvious way to continue earning a living for himself, compounding his existing financial problems.

“He creates this new model that most of our ex-presidents today still follow,” Pipes said. “You give speeches— in many cases these days, for money. You write books and you maintain your contacts in Washington and New York and in the media so that you can still have an influence.”

Nixon focused his efforts in all three of these areas on what he was most admired for during his presidency: foreign policy.

“People bought his books because they still cared what Nixon thought about the world, what he thought about China and Asia, and especially the Cold War, ” Pipes said. “George W. Bush has got another book coming out this year, Barack Obama just had a new one come out with two more to follow… These are not just memoirs, they’re books that are trying to influence policy, and there’s very much shades of Nixon in that.”

When asked in the discussion portion of the event how Nixon would fare as an advisor in our contemporary political landscape, Pipes jokingly mentioned that Nixon would probably be concerned by Trump’s tweeting before addressing the topic more seriously.

“I think Trump sees himself as somewhat Nixonian on foreign policy, that his is a foreign policy based on realism,” Pipes said. “The problem is that it’s just… clumsily done. Nixon was methodical, strategic, everything was planned out. The way Trump went about his business, I don’t think Nixon would have been very pleased with it.”

Pipes said that Nixon would have likely still been willing to offer advice to Trump, as he had been happy to converse even with presidents he profoundly disagreed with, such as Bill Clinton.

“But it’s still hard for me to imagine Richard Nixon sitting there looking through Donald Trump’s Twitter feed and thinking anything other than ‘this is crazy,’” said Pipes.

How Trump will shape the post-presidency is yet to be seen, but Nixon’s effect has been well-documented. For those interested in hearing more, the recording of the full event with Pipes is available on the Hauenstein Center’s Youtube account. To see upcoming events live, be sure to check out the center’s Winter 2021 event schedule on their website at gvsu.edu/hc.