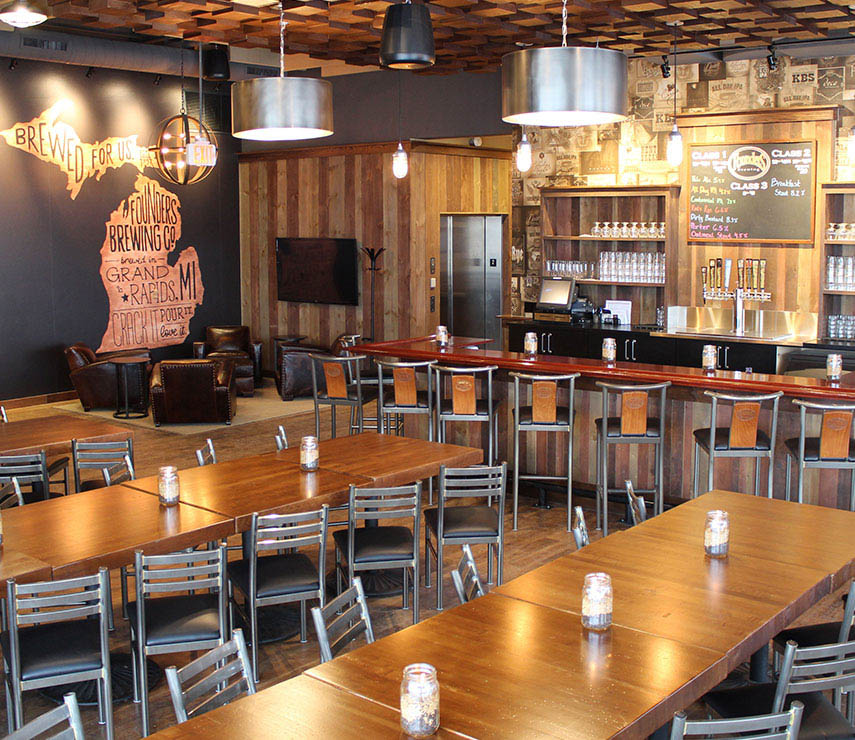 Thanks to a project started in a Grand Valley State University Design Thinking course, beer aficionados across the state will be able to get their hands on a new beer from Founders Brewing Co. this March.

Darien Ripple, an assistant professor in the Integrative, Religious, and Intercultural Studies Department, and students from his Design Thinking class partnered with Founders to create a new beer and accompanying label for the brewery.

GVSU students also worked with Founders on its strategic plan to promote local farming and highlight the history of beer in Michigan.

The idea for the project came about when Ripple worked alongside Founders’ sustainability coordinator, Liz Wonder, during a previous project.

Wonder told Ripple that Founders was doing a new project on beer that was to be born and brewed in Michigan. They were looking to create a Michigan-based beer that is only sold to Michiganders.

She offered to introduce Ripple to some of her team members to see if they’d be interested in working with Ripple and his class, and the rest is history.

Ripple explained that the project was originally only supposed to be two semesters long, but the unpredictability of the pandemic required an additional third semester.

“Originally, I had four teams of five working on this, and they were researching their own idea,” Ripple said. “They all pitched their ideas to Founders and they were so impressed by the work that the students were doing that they couldn’t choose one beer. So, they decided to look at two.”

Eventually, Founders chose the “Old Fashioned,” a beer that is modeled after the classic drink of the same name.

Integrative studies major and former Design Thinking student, Christiana Stankewitz, said that to create this beer, her team zeroed in on familiarity while creating something new.

“Our team focused on the feeling of nostalgia and connecting people to Michigan roots,” Stankewitz said. “That aided in making the beer by focusing on familiar flavors such as oranges and cherries.”

Joycelle Shoemaker, studio art major and former Design Thinking student, helped with the aspect of label design for the project. The final design she came up with was of a group of friends sitting around a campfire near a lake.

“I am most looking forward to being able to drink something that I worked on — how many people can do that?” Shoemaker said. “I think that’s pretty rewarding.”

Not only was this a unique life experience for the students, but also a valuable one when it comes to starting their future careers. Ripple’s Design Thinking course is crafted to allow for students to be able to put what they do in class on their resume.

“When they get the chance to interview, (students) can show them how they have these particular skills that are relevant,” said Ripple.

Stankewitz said what she learned in this course and with this project are things that she will take with her to the workplace one day.

“We were treated like employees working with the Founders team and it helped me understand how to work well with others in the workplace,” said Stankewitz.

Shoemaker also feels that this experience taught her valuable lessons for her future career. She said she enjoyed being able to see what real meetings look like when marketing and sustainability come together.

“I think it is so cool that GVSU can have opportunities like this for students,” said Shoemaker.

Wonder told GVNext that the “Old Fashioned” brew will be available on tap or in a four-pack for a limited time only.