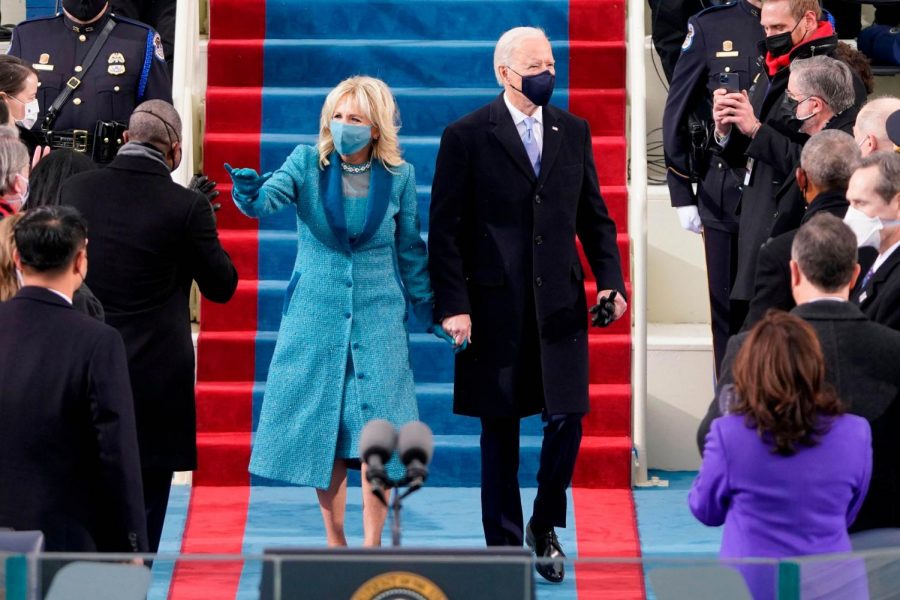 The 2020 inauguration that saw Joe Biden become the Unites States’ 46th President was a day unlike any other this country has witnessed. With a violent insurrectionist attack that ransacked the nation’s Capitol just days before the event was scheduled to take place, about 20,000 National Guard members became involved in securing Washington, D.C. before the inauguration. The event itself went off without a hitch — while most notably without former President Trump in attendance — and featured several well-known Americans delivering messages of hope as the country swore in a new leader and vice president.

This year’s Inauguration made history, seeing former senator and prosecuting attourney Kamala Devi Harris sworn in as the country’s first first female, Black and South Asian vice president. Harris has ambitious plans for her first days in office, and she joins an administration that has made history for it’s record number of women in leadership positions. Twelve of Biden’s nominations for Cabinet and Cabinet-level positions are women, including eight women of color.

The Biden’s inauguration also saw the end of the Trump presidency, and ending one of the most tumultuous administrations in recent history. According to a Gallup poll conducted Jan. 4-15 and published on Jan. 11, Trump concluded his presidency with 34% of Americans approving of his job — making the new low his worst performance in Gallup polls since he took office in January 2017. Trump’s highest approval point was 49 percent, which came in early 2020 after he was acquitted by the Senate in his first impeachment trial but before the COVID-19 pandemic in the U.S.

John Constantelos, a professor of political science at Grand Valley State University whose fields include comparative politics, Western Europe, and international political economy, said that he believes that the former president’s loss in Michigan in 2020 after narrowly winning it in 2016 should not have surprised anyone. Constantelos said that one need not look beyond Kent and Ottawa counties to see why the president lost the election, and why he could have won the election were it not for two main problems.

“(President Trump’s) personal popularity remained relatively low — in the 40-46 percent range — for his entire presidency,” Constantelos said. “His approval ratings were especially low with the college-educated public, who disliked his divisive rhetoric and boorish behavior, and it was primarily the failed response to the pandemic that allowed Biden to be competitive. The 2020 election outcome in Wayne County was very close to the outcome in 2016. Trump’s share of the vote changed by less than one percentage point. The most significant change was right here in West Michigan. Kent County and Ottawa County both swung away from Trump by about nine percentage points, compared with four years earlier. If there was an anti-Trump conspiracy in Michigan, the Republican clerks of these two counties would have been involved, but they were not, of course.”

In Michigan, it was voting in Detroit that was most carefully scrutinized after Biden won the state by over 150,000 votes. The president also fell six percentage points in Oakland County, Michigan’s second largest county. The president suffered big losses in the suburbs, and his margin of victory declined in nearly two-thirds of the “red” counties that supported him in both elections.

Biden’s inauguration proved that he has hopes for making his administration the absolute opposite. Featuring performances by artists Lady Gaga, J. Lo, and poet Amanda Gorman, who’s words “stole the show” for many Americans watching at home and individuals in attendance, Biden’s own message in his speech following the swearing-in also resonated with messages of progress, and he didn’t shy away from difficult topics, either. In his speech, Biden highlighted the issues of systemic racism currently surging protests around the country, as well as addressing the discord that has been present in government leadership in recent years.

“We have learned again that democracy is precious,” Biden said in his speech. “Democracy is fragile. And at this hour, my friends, democracy has prevailed. So now on this hallowed ground where just a few days ago violence sought to shake the Capitol’s very foundation, we come together as one nation, under God, indivisible, to carry out the peaceful transfer of power as we have for more than two centuries. We look ahead in our uniquely American way — restless, bold, optimistic — and set our sights on the nation we know we can be and we must be.”

The inauguration marks the beginning of new leadership in American politics, and a clear shift from Trump’s often divisive and harmful rhetoric that often tacitly encouraged the support of racist elements in the electorate to a more open encouragement of racial and religious bias.

Watching the inauguration, there were many that were joyous and some who were spiteful. Knowing this, Biden made a promise in his speech to be a president for the people, not just those who voted for him, and to listen to and aid those who did not support for him.

For Paul Cornish, an associate professor in the Political Science Department at GVSU with a focus in political theory and American politics, he said that the inauguration left him with a sense of hope that government politicians and discourse may once again have executive branch leadership. Cornish also said that he considers himself to be a socially and politically conservative person, and that Biden is the first Democratic presidential candidate for whom he has ever voted.

“The experiment of a reality TV presidency was a colossal failure on many levels, but most of all because there has been no competent political leadership in the midst of multiple crises,” Cornish said. “The remaining members of President Trump’s administration who have experience and competency, like Secretary of State (Mike) Pompeo, seem to be off freelancing without any clear strategy for national security and the promotion of peace and human rights. I am hopeful in that President Biden is an eminently experienced public servant, who I know will appoint qualified people to rebuild the institutions that have been vandalized over the past four years.”

The Biden administration already has plans for the first ten days in office, with each day following inauguration focusing on a specific topic or issue, which includeseconomic relief, climate, health care, and immigration.

Biden has already signed 30 executive orders in his first few days in office, which include ceasing funding for the construction of Trump’s border wall, reversing Trump’s travel ban targeting largely Muslim countries, imposing a mask mandate on federal property, ramping up vaccination supplies and requiring international travelers to provide proof of a negative COVID-19 test prior to traveling to the U.S. The President has promised even further actions in the coming days, and has already signed to rejoin the World Health Organization, and the Paris Climate Agreement.

Pressure has been mounting on Biden regarding his aid for college-age students and young workers, and many have pushed for him to endorse raising the minimun wage, lengthening the halt on evictions during the pandemic, and increasing student loan forgiveness and deferment programs. Biden is expected to introduce his proposal to raise the federal hourly minimum wage, which has been stuck at $7.25 since 2009. Regarding action on student loans, Biden took action early, requesting that the Education Department extend the suspension of federal student loan payments through Sept. 30.

As for how this election and inauguration has impacted GVSU, on Election Day, hundreds of students gathered to register and vote, and Kent county itself went blue for the first time in a long time. Students have also gathered a number of times to protest for Black Lives Matter following the civil unrest across the country after the deaths of George Floyd and other Black citizens at the hands of law enforcement, which former President Trump said little on other than to voice his support for police officers.

Paul Cornish said he believes that GVSU has always been an accepting community with students who pay attention to world and national events and issues. In his mind, the over 700 students that voted on campus this year made their voices known, and will most likely continue to do so in coming years, especially with so many current issues on the forefront for many young people.

“I have found students and faculty at Grand Valley State to be extremely open and tolerant,” Cornish said. “That, I believe, is in large part due to the intellectual honesty and humility that comes with being engaged in an ethic of investigation and life-long learning. So, I believe we will be resilient through the bitterness and anger that has been provoked by our degraded political discourse. There is a lot to be hopeful about, we have a new generation of activists and public servants who seem dedicated to forming a more perfect union. A union that is inclusive and treats all citizens with equal concern and respect.”