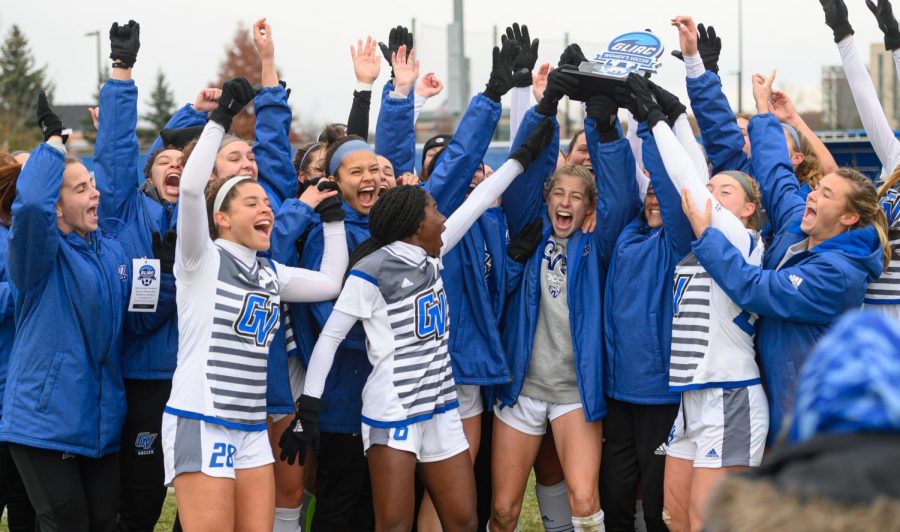 It’s been over a year since the girls soccer team at Grand Valley State University has taken the field. Fall sports for 2020 were cancelled last semester and the soccer team was forced to continue practicing and training. Luckily, their schedule got shifted to the winter semester and they now have a plan to start playing games once again.

“It was amazing when the schedule was released,” said senior forward Ava Cook. “Technically the last time we played was in 2019 and we’re now in 2021. Just to see something on paper or a screen, gives us a feeling that it’s official and it means that we’ll have a shot to play some games. It was definitely good news.”

It was obviously a disappointment for the team to not play during the fall. It was also stressful not knowing if they could even play during the winter semester at GV. There are downsides to not playing competitive games for that long of a period. On a positive note, it gave the girls on the team a chance to get to know each other’s style of play.

“Obviously the restrictions have been rough,” said sophomore midfielder Lexi Morello. “It was a positive however to have all of fall to get incorporated with each other. As a transfer or freshman, you’re kind of thrown into a group and expected to play in a few weeks with great chemistry. I’m glad we had the fall to play on the ground, not just doing kicking and running drills. Soccer’s way prettier that way.”

A fall without a season may have been a good time for the team to develop together, but their practices weren’t without issues. Understandably, it’s a difficult task to maintain motivation for a season that may or may not happen in the spring.

“During the fall it was hard to keep our motivation,” Morello said. “At that point, we hadn’t played in over a year. Without games, it was difficult to see everything come together and to see all that work in training pay off. We were really excited to hear that we will be on the field again. March 19 will be a day that’s very memorable for us.”

Motivation was preached by coach Jeff Hosler and the upperclassmen on the team during the fall. They aimed to have high energy at every practice and training session. They may have had down days as a team, but they always were able to pick themselves back up.

“I’ll be honest, there were days that were harder than others,” Cook said. “That’s definitely something that we’re proud of as a team. These low tempo days were very few and far between. If someone’s having a rough day at practice, we hold each other accountable and make sure we stay focused. We’ve done a very good job of this and we’re still continuing to maintain it.”

COVID-19 brought many restrictions to GVSU athletic teams. The pandemic not only caused the girls soccer fall season to be cancelled, but it also limited the amount of time they were able to spend in contact with one another. Freshman and transfer students had a unique way to get to know their new teammates. Even with the challenges of getting acclimated, the team still found a way and has good chemistry.

As a transfer student and being new, I’ve had a really nice experience meeting the coaches and my teammates,” Morello said. “I’m really excited and happy that I made the decision to come here. To start with, I was on Facetime a lot with Jeff. With the girls, I had played with a lot of them before so it was an easier transition.”

Even for veterans on the team, it was difficult to get quality social time with their teammates. Much like most students on campus at GVSU, players have had to get creative in order to spend time with their fellow players.

“Honestly, it has been tough,” Cook said. “I’m very thankful that I live with some of my teammates and we have had to get very creative to be social with each other. We’ll go out and socially distance from each other and have conversations together. Whether it’s through the window, through doors, or online, we’ve still been able to connect together.”

Luckily for everyone on the team, there’s almost a perfect mix of new girls and experienced ones. Any new tasks that have been thrown their way, the upperclassmen on the team have been able to lead the younger players through it.

“The more we train together with transfers and freshmen, the more they acclimated to our way of playing they get,” Cook said. “In a normal year, we usually have a couple of weeks in the preseason and we’d been playing already. It’s honestly been nice to have all this extra time with the young girls to get them rolling into our program and for us to set an example.”

When games do start up in March, the Lakers have the benefit of the experience upperclassmen on the team bring. It may perhaps be the biggest strength of the team.

“I think this is the most balanced and deepest team we’ve had in my seven years here,” Hosler said. “It’s really nice to finally have a very experienced group. In 2019, we only had one senior. To finally have a solid group of seniors and juniors who have been in big games and know how to help the younger girls. I think that’s our biggest advantage.”

With the abundance of time the Lakers have had to prepare the, Hosler and his staff have been implementing some style changes. They introduced new ideas and strategies to the team. COVID-19 has negatively affected almost every person at GVSU. It may however have been an advantage for the girls soccer team.

“We’re still certainly focusing on being a possession oriented team and very attack minded,” Hosler said. We’re working on our ball dominance to make sure we have good positions in games. We’re basically implementing different levels to our game. We’re working out some positional players playing higher up the field or dropping deeper to pull apart defenses a little bit more. I fully expect that since we’re playing a conference schedule, a lot of teams will be sitting on us, trying to make sure we don’t score so that they can stay in games. We’re going to have to be even more creative than in the past with this schedule.”

Obviously, every season starts with goals of winning the GLIAC and winning the NCAA tournament for GVSU teams. With the pandemic, every team at GVSU has goals to keep all their players healthy and to compete in all the games on their schedule. For the girls soccer team tho, they plan to keep their mindset in the present while inching closer to the start of their spring season.

“We’ve always been a program who doesn’t get ahead of ourselves,” Hosler said. “Our main focus is just getting better every single day. There’s been know better example of that than what we’ve had to deal with in COVID-19. There will be a lot of things that change until our first match. If we set big goals for the future we might be setting our sets up for failure.”

On Feb. 7, the girls will finally take the field again against Xavier University in an exhibition match. On Mar. 29, their GLIAC only schedule kicks off against Northern Michigan. It’s been a long time coming for all the girls and coaches on the team. It will surely be a season to remember after not competing for over a year.