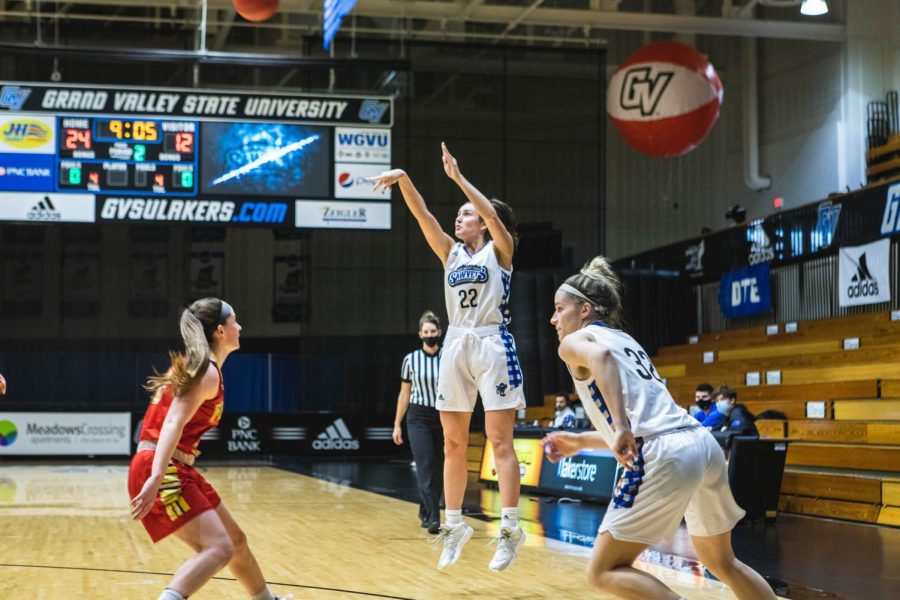 The Grand Valley State University basketball teams have had quite a year trying to just play basketball. From the cancellation of the NCAA Tournament last year to not knowing if they were going to have a season at all this year, it hasn’t been easy for the Lakers to play some ball.

While they do have a season this year, the caveat that gives coaches and players an entirely new challenge is playing double-headers. Currently, the Lakers are playing weekends against conference-only opponents back-to-back. The athletes are practicing Monday through Friday and playing two full-speed games at the collegiate level all in one week.

At the same time, the student athletes have to worry about their studies and classes. Coaches also have to make sure their athletes aren’t riddled with injuries.

Junior Emily Spitzley is coming off an injury herself from last year and has started every game this year for the Lakers. She is averaging 30 minutes in those contests this season.

“It’s been really different playing back-to-back days,” Spitzley said. “I think physically we kind of knew what to expect. You’re not getting a break after your game and you’re going to have to play 30 plus minutes one day and follow it up with another 30 the next. It takes a toll a little bit and obviously coming off an injury, I worried about if my knee was going to be okay. So far though, it’s been great.”

While athletes can run and train their bodies to handle the storm of a season, there’s something about playing the same team twice in one weekend that is more difficult than how much training they’re doing.

“I think the hardest thing about playing back-to-back is playing the same team,” Spitzley said. “If it were different teams, it would be different, but it’s a challenge to play the same players. They know you as a player now and they’re going to guard you differently and make adjustments.”

Men’s basketball coach Ric Wesley knows how difficult it can be to have such little time to prepare for game two. It forces coaches and their teams to adjust on the fly and maintain a strong mental.

“It’s a quick turnaround, and obviously you don’t have a brand new scouting report,” Wesley said. “You try to do some of the same things from the first game that went well and try to anticipate maybe some of the changes that the other team is going to make, but it’s tough.”

Playing these doubleheaders is new to everyone, but juniors like Spitzley have the advantage of knowing what being an athlete in college is like. She’s been balancing school and athletics going on three years now. Ellie Droste, a freshman guard for the women’s team, is one of the many new faces to her team and has been thrown into the fire with what it’s like to be a student-athlete during this “COVID season.”

“Coming in as a freshman, it’s an awesome experience,” Droste said. “It is kind of tricky with COVID regulations with the masks, social distancing, and now there are no fans, along with the back-to-back games. The first games we played against Saginaw it was weird at first. The second day I was like, ‘Oh, I am a little bit tired,’ it’s not something I’ve ever done before. The only thing I could compare it to would be when I played Amateur Athletic Union (AAU). ”

Although this is a unique way to play out a season, Droste is already getting into a routine. She enjoys being able to play the same team twice and the advantages that come with it. For example, after losing their first game against the University of Wisconsin-Parkside, the team did not have to wait to get revenge in their second game of the weekend.

Droste is not the only freshman on the team. Luckily, she has five other freshmen alongside her and the rest of her teammates to help each other out this season.

“Our entire team has each other’s back,” Droste said. “Everybody just wants to see everyone get better, and if someone makes a mistake, everyone has their back. I think it’s really unique. I’ve experienced a lot of different teams, whether it be AAU, high school and now college, and it’s great that every single teammate is really positive. It’s an awesome experience and culture here.”

Aside from the fatigue and how many hours are dedicated to the gym and constant playing, the athletes also have to make sure they’re still finding room to get their homework done. Usually, that time was reserved for Sunday. However, they don’t have that luxury this season.

“For me, Sundays were a big homework day,” Spitzley said. “Sitting in the library for hours and hours, so it’s been a big adjustment to that. Now that our entire weekends are gone, Mondays seem to come pretty quickly. We’ve had to plan our time in a way that homework, classes, and studying are more periodically done throughout the week so it doesn’t pile up on a weekend where we virtually have no time to sit down and dedicate it to our school, especially when we are on the road.”

The men’s and women’s basketball teams will continue their season of double-headers with a weekend against Ferris State University. The men’s team travels to Mount Pleasant and will try to improve their 4-3 record on the year. The women’s team (8-1), is playing at the GVSU Fieldhouse Arena, where they will be hosting the Bulldogs.