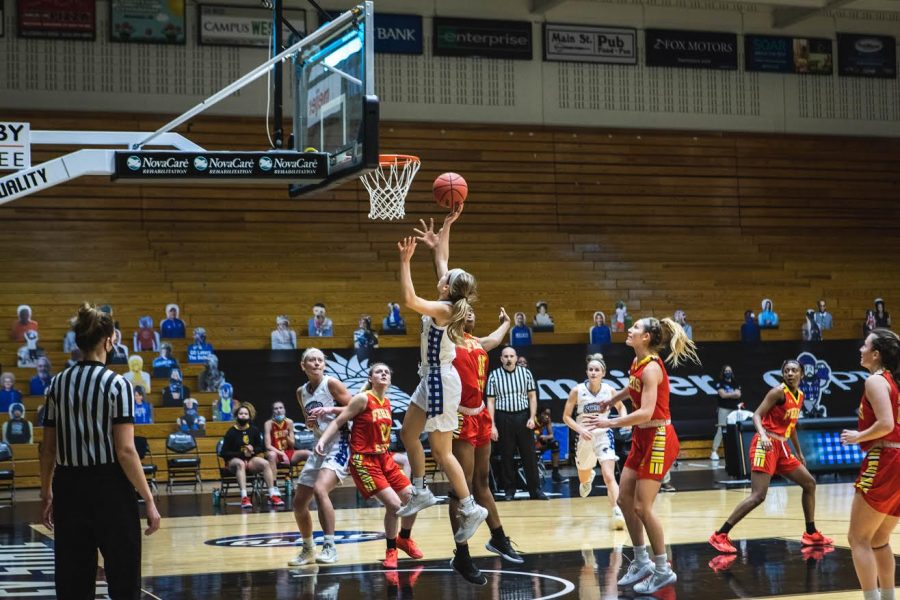 The Grand Valley State University women’s basketball team temporarily changed their names to the Sawyer on their Feb. 6 to cut down the competition during their matchup against Ferris State University.  While the Lakers name might have changed, win streak didn’t, as they added a fifth win to their current run. The girls won the game 72-57, putting their record this season at 9-1 while Ferris fell to 3-7.

The Sawyers held on to their lead throughout the first two quarters of  the game, ending the half up 39-25. The Sawyers did begin to see a dip in the third quarter, but quickly came back around by the fourth.

The team had some defensive faults during the game, especially during the third quarter. However, Ferris State couldn’t catch up with the Sawyers offensive firing on all cylinders. Junior forward Hannah Kulas played an especially good game, leading the team with 23 points and 10 rebounds.

“I think that we played with a lot of toughness,” Kulas said. “There were times we were kind of wavering but we were able to respond really well when they would make a run. I think we need to take care of the ball a little bit better, especially if we’re getting kind of tired. We’re kind of getting a little lackadaisical, as coach likes to say, with our passing, but I think we’ll definitely be able to pick that up.”

A few of the other girls on the team had some moments in the spotlight as well, including freshman forward Rylie Biseballe who came off the bench and contributed with solid defense and grabbed some boards. Junior guard Samantha Gehrls did a great job defending one of the leading scorers in the conference, Ferris State freshman Kaydn Blanchard, and limited her to only 13 points. Gehrls was also effective in rebounding, grabbing 10 boards in traffic during the game. Sophomore forward Courntey Sharland scored some big baskets in the first half and ended the game with seven points and two rebounds.

“That was good to see some of these players that haven’t played as much come in and give us some good minutes,” Williams said. “I thought we had a great sense of urgency on both ends of the floor.”

“I thought we got a little bit lax with the ball offensively,” Williams said. “In the third quarter we missed some defensive assignments. With Ferris State, the way they can score they make you pay, and they made us pay. That third quarter was a tough stretch for us but I thought our kids bounced back really well in the fourth quarter, took care of the ball, took care of the glass, and flipped the tables.”

In a tough game against Ferris State like this one, it may have benefited GVSU to have the support of their home crowd. Without the energy provided by a crowd, the players on the bench and the assistant coaches make up for some of the intensity a crowd would provide.

“Normally it would be super packed because we have the back-to-back games, but when you get out on the floor you don’t really notice it as much,” Kulas said. “It’s almost helpful, especially at time outs and at halftime, there’s no distractions so we can really lock in on coach.”

Next week the Lakers will be playing at Northern Michigan University next weekend Feb. 13-14 to continue their season.