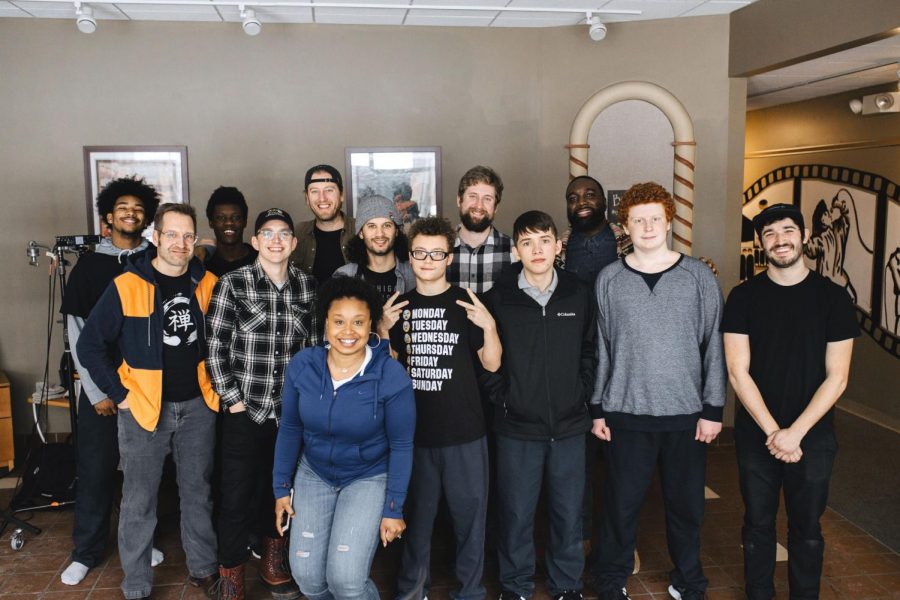 For Cole Williams, fatherhood has always been a central part of his life and his work.

The CEO and Founder of Son To A Father and Cole Speaks – both programs that work to empower and restore relationships between teens and their parents – Williams has utilized experience with his own fatherless childhood and adolescence, becoming a single teenage father, reuniting with his biological father, to finally fostering and adopting fatherless son’s into his own family in order to educate other young men on the terrain of parenting.

Williams founded The Delta Project along with the help of Joel Van Kuiken, a passionate advocate, creative and adjunct Grand Valley State University communications professor, and Eric Scott Johnson, a founder of Gorilla, a creative studio focused on human-centered storytelling.

The Delta Project is an organization based out of Grand Rapids whose content aims to break the generational cycle of incarceration by reconnecting youth of color and their families to community relationships through mentorship, resource connections and storytelling, often through the eyes and experiences of young Black men.

Van Kuiken, who formerly worked in marketing and communications at Amway, left to co-found The Delta Project with Williams after he realized the job would allow him to utilize his creative design thinking skills learned while studying for his masters in communications at GVSU, which he earned in 2008.

The two quickly got to work on the Delta Project’s mission, which was answering the question: “how do I become what I don’t see?” From this question, the Delta projects mission was born: a platform which would connect Delta Project students with community leaders who could empathize with their circumstance, offer insight through one-on-one conversation, and create and provide positive role models.

“This work all stems from my background as a young man longing to have a relationship with my father, and finding myself looking for fathers in other men,” Williams said. “I want to create positive role models for the kids, and be able to utilize my nurturing nature in my work to help them be successful.”

Williams’s most recent work has been dedicated to providing fatherhood training, support and materials for the Michigan Adolescent Pregnancy and Prevention Program (MI-APPP), as well as penetrating the culture of the Kent County Juvenile Detention Center, where he provides life skills and leadership development to incarcerated youth.

Williams said that his education on the poor treatment of Black men historically really opened his eyes to the treatment of the black community in the country, and also where he lived, inspiring him to want to work with youth education and incarceration.

In his work with The Delta Project, Williams mentors several students and helps them to create content that helped them viscerally tell their own stories. Together, Williams, Van Kuiken and Johnson lead students in producing their own content, letting the kids run much of the show. Williams said that being the adults in the room, fostering a sense of trust in the kids is a major part of the work they want to do.

“Ultimately, I’m working with a group of kids who have made some poor choices, or their personal journey has led them down the line to detention,” Williams said. “I’m conditioning myself to understand that I’m not walking into a room where these kids are seen as monsters or predators, but kids that if you give them a chance will want to learn. That helps me go in with a level of enthusiasm knowing I’ll be able to encourage them to open up.”

Together the team envisioned a platform which would connect Delta Project students with community leaders who could empathize with their circumstance, and offer insight through one-on-one conversation. Eric Johnson led the design, a device inspired by Errol Morris’ direct-to-lens interview style, which uses a two-way mirror system that enables both interviewer and interviewee to hold a conversation while looking directly into a camera lens.

Each interview provides an intimate window into the potential of young men trapped in a cycle of incarceration. Often the kids are leading and directing the shoots, and the equipment they work with is valued at over $200,000.

Williams said that by developing a level of trust with the kids, the team is able to create a unique product that takes storytelling to another level, and allows them to challenge narratives by having kids tell their own stories in their own words.

“Often with the kinds of kids we work with, many of them have never had access or been trusted with that kind of expensive equipment, and not only that but the staff at the detention centers have often never seen stuff like what we work with,” Williams said. “It was brand new for that whole culture in the juvenile detention centers, and you were able to see the level of humanity and compassion it brought.”

Williams said that the kids he’s worked with in the past have been so excited to work with the equipment even after only seeing it once, and will often request that it be part of their treatment or aftercare plan. With COVID-19 impacting every facet of society, it’s not surprising that it had a detrimental impact on The Delta Project’s work. Now unable to work in close contact with kids through the Delta Project productions, both Van Kuiken and Williams have been supplementing that time working on new projects to help kids individually.

Among the projects currently in the works, Van Kuiken said that they have recently purchased some vlog hand-held video cameras that they plan to distribute to some students so that they can video blog their experiences and daily activities, and share them on social media.

“We wanted to find a way to bring the experiences that they were having in the Delta and residential treatment program out into their space, and provide the support through opportunity and true mentorship,” Van Kuiken said. “Being there to support them, and connect them to services and to things that will bring meaning to their lives, so that they can get off of probation and become the leaders in the community that they are meant to be. Avoiding recidivism, and helping them not become young fathers who continue the negative path they are on is what our goal is.”

The Delta Project’s work to help end the perpetual cycle of incarceration that regularly leaves generations of today and tomorrow without access to the wisdom of fathers, brothers, and cousins who have gone before is opening the eyes of many young men to the possibilities that exist outside of prisons and detention centers.

Williams’s work with young men also inspired him to create a comic book series aimed to tell the story of a father as a superhero. Williams said that his work with kids made him want to find a way to teach his fatherhood curriculum, but to make it digestible to younger audiences. The comic book focuses on a father who is a superhero, is based out of a barbershop which Williams utilizes to create strong visuals and context for black men and their communication.

“Recognizing that visually, images matter to these kids and that there is a lack of representation of black and brown folks that isn’t associated with violence or criminality, but I wanted to create something positive that kids could relate to,” Williams said. “For me, the comic book project is a way to use a new medium to tell a story, maybe animation at some point, and then have kids inspired to make their own comic book or tell their own story some other creative way.”

Williams says he hasn’t quite finished the series yet, but that he hopes to be able to share it with his students soon. Moving forward, Williams, Van Kuiken and their team are hoping to be able to get back into the studio with students and create some new content, but for now, are working on how to help outside of the classroom.

Van Kuiken said that although the project has been put on a slight hold because of the pandemic, they are still coming up with ways to help students and their community through educational means, and that making a difference at a distance is still possible.

“It’s such a pleasure to be a part of this journey, and to be engaged with meaningful work, especially at this point in my life,” Van Kuiken said. “These kids don’t often get a second chance because they are suddenly in the system, and the whole point of The Delta Project and our work is to try and help them get back on the right path early. We want to give them a chance to become what they’re meant to be, the leaders of our community, while they are young.”

The Delta Project is a non-profit organization and accepts donations, which are especially appreciated at this time. Williams and Van Kuiken also said that joining their mailing list, sharing their videos and actively listening to the stories they tell are all great ways to help them in their mission. To learn more about The Delta Project’s work, and to watch their videos and explore content, visit their website.