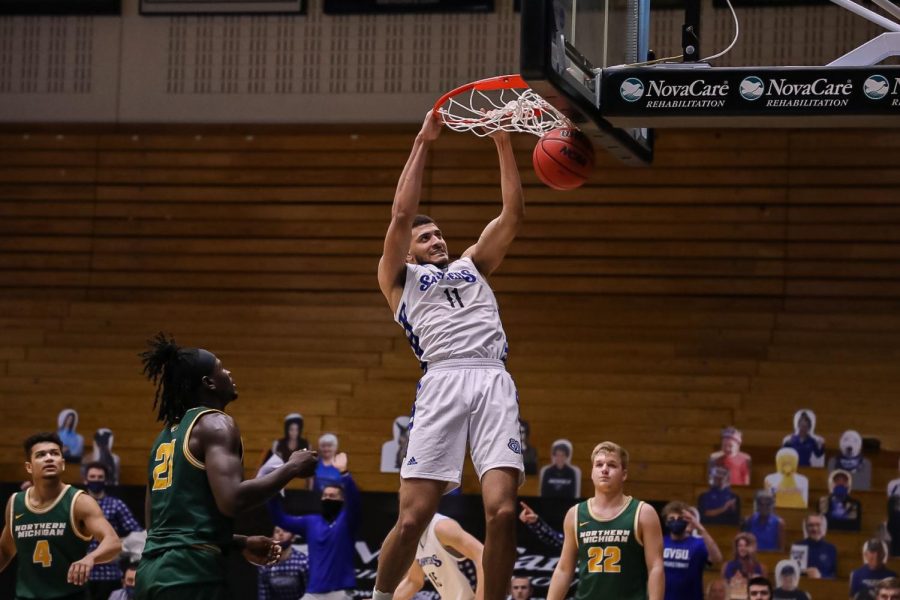 The Grand Valley State University’s men’s basketball team prepared for their game against Northern Michigan University as Lakers, but they won as Sawyers, 77-72. In honor of what was nearly the school’s replacement mascot, the team donned new jerseys for their last game at home this season, sending the Wildcats back home with two losses after this weekend’s games.

Saturday, Feb. 13, saw both teams enter the court with tension in the air following a narrow 81-75 overtime win on Friday in GVSU’s favor. The Sawyers started out with an early by going on a 14-point lead. GVSU held onto that lead for the rest of the game, but things swayed back in NMU’s direction as fouls piled up against the Sawyers early in the first half.

“It was the second game of a back-to-back and guys are tired,” said Coach Rick Wesley. “We came out with good energy, but it’s hard to sustain. We had some foul trouble, they made their run later in the first half and from that point on it just was back and forth.”

By the end of the half, GVSU was up 37-30, and it seemed that though they were ahead, the battle had only just begun. The previous game showed the NMU’s ability to stay in the games, so it was clear that a seven-point lead was everything but a curtain call for the Wildcats.

The second half showed much of the same with the Sawyers holding their lead as NMU clawed their way back up just to get snuffed back out by key GVSU players. Seniors Christian Negron, Jake Van Tubbergen, Jordan Harris and Deleon Brown all had pivotal performances in the Sawyer’s victory.

GVSU held onto a three-point lead in the final minutes of the game, leaving this game’s outcome to the last couple of possessions. First up was Van Tubbergen, who hit both of his free throws at the line, followed by a defensive stop by Negron. Then, GVSU scored four more free throws from both Brown and Harris to close out the game.

Compared to Friday’s performance, it was the bench that stepped up in a big way. Many players stood out on the court.

The bench played excellent in this game, but it was Jordan Harris who was the star of this contest. Harris racked up 13 points, six assists and six rebounds. This was not an easy feat for Harris as a point guard. He was competing over boards with 6’4 center Dolapo Olayinka from NMU.

Harris also came in clutch with the final two free throws of the game that ended up being the proverbial dagger on the night. He played a key role in producing offensive opportunities.

“I play to win,” Harris said. “Every game I just come out here and play to the best of my ability, and whatever happens on the stat sheet happens.”

The Lakers are closing out the season with five away games, the first of which is in Davenport on Tuesday, Feb. 16 followed by two games on the weekends of Feb. 20 and Feb. 27.