GVPD captain reflects on journey from GV student to now 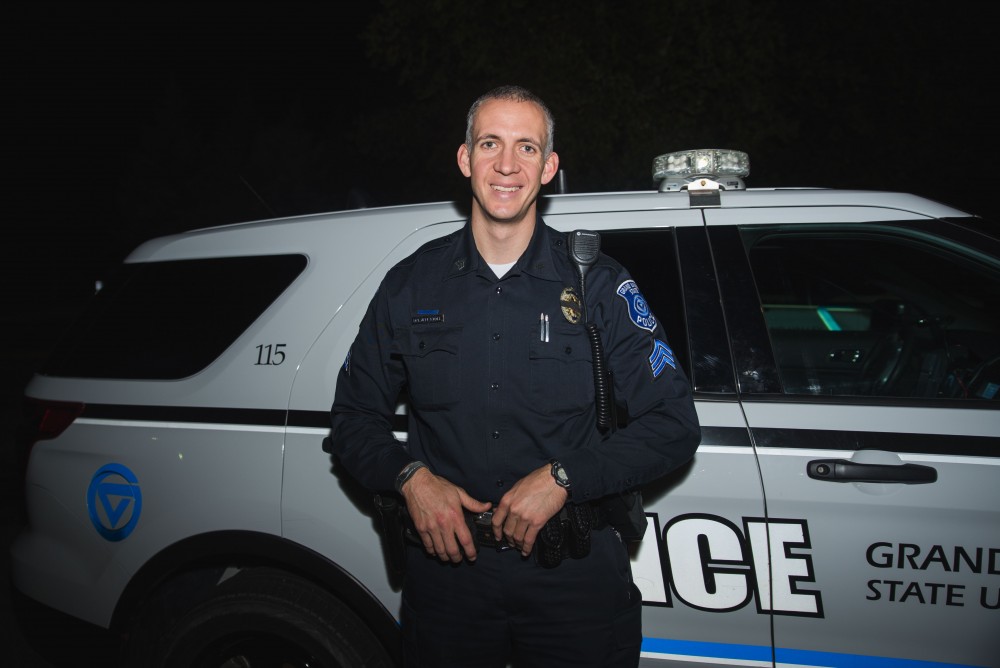 Grand Valley Police Department? For GVPD Capt. Jeffrey Stoll, this story all too familiar because it is his own. Students often see the GVPD around at events, buildings, and even pulling people over or arresting them, but never really know why they chose to protect our community.

For Stoll, law enforcement wasn’t always the plan, but it has ended up being a career in which he has loved and grown with the GVSU community.

After a year of being an engineering student at GVSU, Stoll realized the major was not something he would love doing in the future. He thought about following in the footsteps of his father and being a teacher, but an unlikely job working for housing security created an interest in criminal justice.

“I got that job, not because of interest, it was more based on availability,” Stoll said. “You just want a way to get money. I walked around with my partners and sought out violations that occurred in the living centers and when those situations happened, we did have interactions and I came to find that I really liked that.”

After taking the job, he enrolled in Criminal Justice 101. Since he loved it so much, he continued to take criminal justice classes which eventually led him to the Grand Valley Police Academy. After graduating from the Academy, he started with the GVPD in 2006.

“I worked in the traffic division for about a year doing stuff for parking and parking compliance and I got hired full-time in October of 2007,” said Stoll.

Stoll says it is interesting working in this unique college environment because the population changes by about 20-25% every year and usually there is a whole new cycle of people in our community every four years. Because of this population change, the things he does on the job help him adapt and stay focused on keeping the community safe.

“When I come in for my day, I’ve got to check and see everything that happened in the last 24 hours or on the weekend,” Stoll said. “I review all the daily logs from the officers, I review all of the reports that come in, all the calls for service. Based on the nature of the report, if it requires a follow up, then I will assign people to follow up or I will pass on and approve those reports and pass them on to records.”

Stoll noted that the evolution of technology has been one of the biggest changes he has seen throughout his years at the department. As the captain, he is in charge of all of Allendale’s base operations and he oversees all of the patrol officers within the department. Every day is different as a police officer and it is one of Stoll’s favorite parts of his job.

“The thing that I like the most is that every day is just different,” Stoll said. “You don’t know what your day is going to be like. It’s not uncommon for me to get a call in the middle of the night about a situation to provide guidance, to provide information or to identify some resources. I like kind of attacking those and addressing those as they come up.”

Stoll and the department understand the responsibility they take on in helping those who need help, and providing information and help in order for that person to find closure is always satisfying for him and the department when they can help an individual. Getting students to graduation and interacting with them during their time here is also one of Stoll’s favorite parts and duties of his job.

“I’ve had a very fun career and I still have a lot of fun years ahead of me and I’m excited about that,” said Stoll.