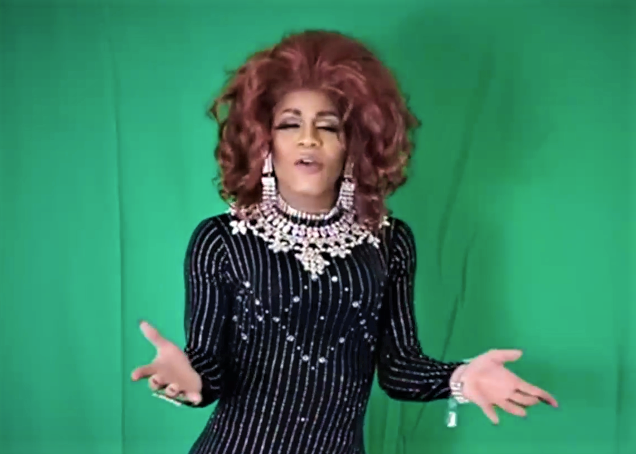 The evening started with a performance from La Reine Devine (GVL Autumn Pitchure).

This year, Grand Valley State University’s Campus Activities Board (CAB) and the LGBT Resource Center welcomed Ginger Ambrosia and friends for a night of ballads and drag to celebrate Valentine’s Day. Ambrosia co-hosted the event with Marla Wick, the Associate Director of the LGBT Center. People were able to RSVP for a spot in the Zoom call, but for those who couldn’t make it on Feb. 17, there was also a Facebook Live that anyone can tune in or re-watch at www.facebook.com/gvsucab.

With the event being online, there were some difficulties. Beginning the night, Ambrosia tried to play a video of a performer, but when doing so there was no sound. However, the audience was kind and was quick to help her navigate where the sound was. Sometimes, technology can be a pain; we’ve all experienced the struggle of trying to get our tech to work as intended over the course of this pandemic. Thankfully, people were understanding and the night was able to get back on track.

The night focused on showcasing the work of all the different performers. Ambrosia asked questions and transitioned smoothly between acts, asking each how they got into drag and what inspired them. At the end of the event, she asked for their social media, so people could stay connected to who they were interested in, support, and give them a follow.

Each of the performers built up the atmosphere, even online, through their dances, creativity and lip-syncing, and had unique expressions that brought you into the story they were telling, or the emotion they were feeling.

The first performer, La Reine Divine danced and sang along in a dazzling dress, her make-up done with precision. With movements and facial expressions were elaborately exuberant, Divine guided the audience through the emotions of the ballad. After the song ended, Devine finished with a classic GVSU Laker cheer.

“I played volleyball at Grand Valley,” Divine said. “I was the oldest gay on the team, so I was called ‘The Queen.’ My fiance at the time was taking French, and he came up with the name ‘La Reine Divine,’ because it means The Divine Queen. His uncle actually helped me with my first show. After three years performing on my own, I met Petty Divine at Grand Rapids Pride, and I’ve been a member of the House of Divine ever since.”

Divine was followed by Cherub Sinn, who took full advantage of the digital setting to filter the background to her liking. She had a playful candy heart filled background as she sang her heart out to “Big Girls Don’t Cry” by Fergie, dancing expressively with her hands.

Her background was complimented by her makeup and dolled-up outfit, a flower crown and a lacy pink dress that topped off her Valentine’s motif. As Sinn explained afterward, achieving such a look fully prepared can take quite some time.

“I like to leave time for error and correcting mistakes, but it takes me four to five hours to get ready,” Sinn said. “I learned from a lot of people I started to do drag with, and continue to do drag with. We have learned things from one another. I’ve also taken my own ambitions and learned things on my own.”

Another exciting performance came from Christi Da Vinci, who entertained with a fun and flirty bit featuring a lollipop in hand and a T-Shirt with “Heart Breaker” scrawled across the chest. She danced around the environment right in her own apartment, making her performance that much more relatable and personal.

“I was born in Escanaba, Michigan, so I’m a Yooper,” Da Vinci said. “My drag name comes from my legal name out of drag, which is Christi. I remember when I first started thinking about drag, I was looking up all the pun names and thinking, ‘Oh, people have probably taken this and that… and it’s not really that funny either.’ But I’m an artist— I hate saying that, it’s so pretentious— and Da Vinci’s one of my favorite artists. And Da Vinci was also gay!”

To top off the night, Ambrosia played a video of herself, a COVID-19-inspired original set to “All by Myself” by Celine Dion. Ambrosia play-acted and lip-synced to the song from room to room in her home, becoming very emotional and crying when the video was talking about no face-to-face interactions, lessening of travel, and limited engagement in the public sphere.

Ambrosia reached out to her window desperately, demonstrating exactly how much she didn’t want to be by herself. Though the act was comedic at heart, the audience could relate to exactly how much the pandemic has made people feel trapped inside of their homes.

“Last year, when COVID first started, I was losing my marbles at home, just like everyone else,” Ambrosia said. “I was living with my sister, my partner, Cherub here, and my dog, and we all just about thought the National Guard was going to shut down the world, so we all worked together to create that and several other videos as a bonding experience.”

The night closed with questions from the audience, with anyone being able to raise a hand through the Zoom feature or leave a comment in the chat, which was a good way to wrap the evening up, and made the audience feel satisfied as well as educating them on elements of drag culture they may not have known before.