After over a year, GV Volleyball hits the court, sweeps Parkside in weekend series 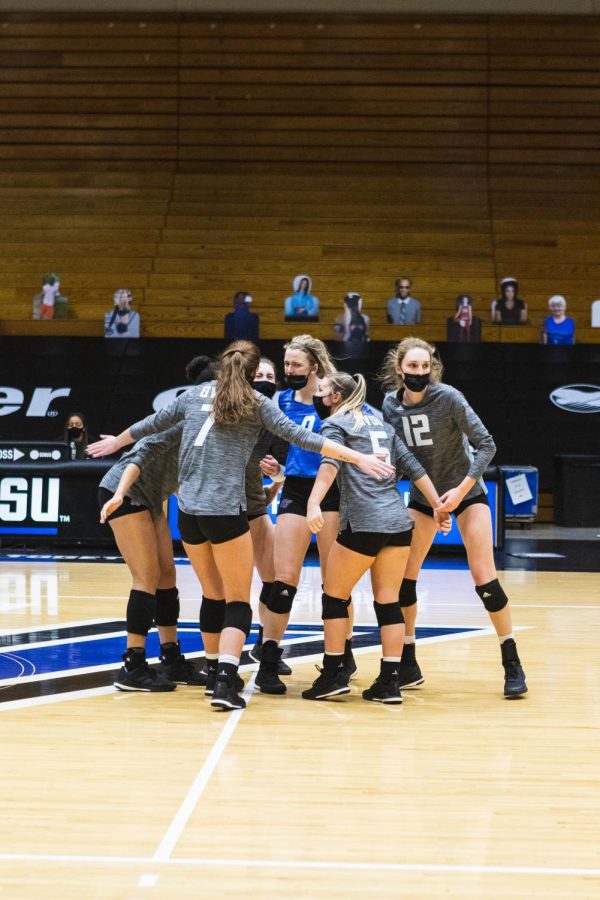 After a long wait, the Grand Valley State University volleyball team started hot in their season opener this past weekend against Parkside college with a pair of wins. The Lakers swept their Friday match 3-0 and didn’t stop their winning ways on Saturday with another 3-0 win.

On Friday, junior Ali Thompson led the way for kills with 13 and was followed by sophomore Karlie Kucharczyk with seven. Sophomore Rachel Jacquay had 32 assists while junior Brooke Binkley led the way defensively with 11 digs.

On Saturday, the Lakers took the first set 25-18. The second set was almost identical to the Lakers’ first victory, winning 25-17 to take a 2-0 lead. The Lakers then finished the sweep when they won the third set 25-21.

While volleyball is usually played in the fall, head coach Deanne Scanlon is just happy to be back playing games this winter.

“I don’t know if I can even put it into words,” Scanlon said. “It’s just very emotional. It really helps you center in on why I’m coaching in the first place. It’s because you love the game and the kids. When you have it taken away from you, just like anything else, you really start to appreciate what you have. I feel like for me personally, stepping away from it has given me a good perspective when coming back to it and finding that joy of being out there and competing”

The players on the team feel the same way as Scanlon. It’s been a long time since they played on the court.

“It feels really good and we are all just super excited,” Graham said. “It just feels like what we are supposed to be doing now and it’s been a long time. We bring it up a lot that we last played in the fall of 2019, and now we are finally here. We are just excited to finally compete and play with each other.”

Due to COVID-19, the Lakers and other teams in the GLIAC are now competing in a shortened conference-only schedule. Scanlon and the team noticed the difference in the schedule. Looking towards the future however, this new schedule could benefit the Lakers.

“It is a little weird, but we do have an off-season normally where we are doing some sort of competition,” Scanlon said. “I think the biggest change will be the turnaround going into the fall, having played a lengthier schedule in the winter, where it’s normally shorter. We have less of a turnaround time. I think it will be beneficial. We have been getting a lot of training time in right now. I think it will be better in the long run.”

Like the GVSU men’s and women’s basketball teams, volleyball is also playing back-to-back games for this shortened season. After the first weekend of doing so, Graham already sees the benefits.

“It’s interesting because we are able to scout the game we just played and make adjustments right on the spot,” Graham said. “That’s something we never get to do. We normally have several weeks before we see a team again. It’s really interesting to reflect on the game from the night before and adapt.”

The 2-0 Lakers play again next Thursday, Feb. 25. They will be playing at Wayne State University and look to continue the success at the start of this young season