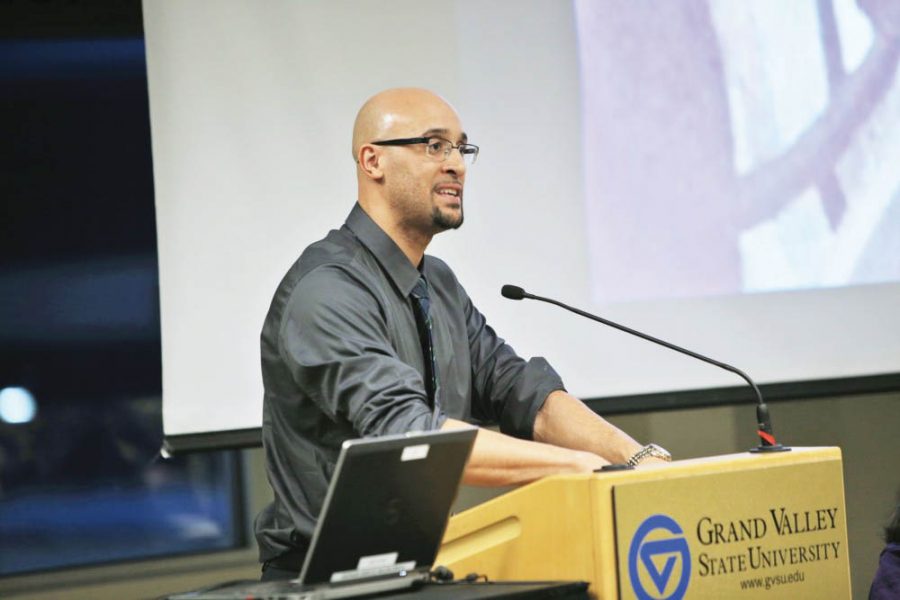 In the past few years, Black Lives Matter has riddled all of the American sports landscape. Players from a variety of leagues have protested, kneeled, marched and worn shirts advocating for the end of police brutality and racism in the country. While this issue is talked about frequently today, it has always been in the history of American sports.

Louis Moore is an associate professor of history at Grand Valley State University. The author, educator and podcaster has always been interested in sports and the civil rights movement.

As he grew up and progressed through school, he took every opportunity he could to write about sports and Black Athletes. Now, Moore has written two books, “I Fight for a Living: Boxing and the Battle for Black Manhood, 1880–1915” and “We Will Win the Day: the Civil Rights Movement, the Black Athlete, and the Quest for Equality.”

Moore has covered a wide array of Black athletes in the history of American sports. He’s covered the impact of athletes in the middle of the twentieth century like Jack Johnson, Muhammad Ali and Jackie Robinson. He also did research on Black sports journalists who participated in civil rights movements.

After years of studying and reading every piece of information he could find on pivotal Black athletes from decades ago, he also sees athletes today who make similar contributions to civil rights.

“LeBron has been huge,” Moore said. “His teaming up with More Than a Vote was big. He is making sure that people are registered to vote and helping paying off fines for people so they can vote. I believe that he and the organization have registered about 300,000 people to vote.”

People from all around the country have participated in marches and have made their voices heard. GVSU students and athletes have been vocal about the Black Lives Matter movement. The most prominent figures in the country are not the only people who can make a change. Every individual, no matter their financial or social status, can have their voice heard, especially athletes.

“Renee Montgomery of the WNBA sat out the season this year to focus on social justice,” Moore said. “She’s educating folks and helping with the civil rights act. The beautiful thing about her actions is that they trickled down. You don’t need to be a superstar athlete and you don’t need to be rich. Anybody can go out there and register people to vote.”

Players and coaches from different leagues in the country have actually made a difference by using their voices. In the NFL, players were allowed to wear decals with names and slogans on their helmets. When reporters or individual viewers don’t know the name worn by a certain player, they are forced to research them to clinch their curiosity. Education has been a key motive of players speaking out.

In Georgia, several WNBA players wore Rev. Raphael Warnock shirts during the re-vote for the state’s two senate seats. These Black athletes sought to make a difference by encouraging people to vote for Warnock.

Warnock ended up winning the election, leading to the Democrats to hold the majority in the Senate with the vice president’s tying vote. With these WNBA players advocacy, they have made a difference in bills that will be passed in this country for the next four years.

While Black athletes participate in BLM protests and work with voting organizations to help the Black community, they have their own issues in their respective leagues.

Taking the National Football League as an example, offensive coordinator for the Kansas City Chiefs Eric Bienamy has still yet to be hired for an NFL head coaching position despite largely regarded as incredibly qualified for various openings.

Moore finds this situation a pattern in the NFL. Beinamy’s case is much like former NFL coach and player, Lionel Taylor.

Taylor was a star player in the 1960s. He became the first receiver to catch 100 passes in a single season. Taylor then shifted his focus to coaching after his retirement. As a young receivers coach, his goal was to become a head coach.

During his stint as a receivers coach for the Rams, he helped craft the team’s offense in the absence of a formal offensive coordinator. It was only until the next season after the Rams won a Super Bowl that the team decided to promote Taylor, having proved himself in their eyes. A few years later, Taylor would have to leave the country entirely to become a head coach in Europe.

“Taylor is just like Bienamy,” Moore said. “Everyone knows he’s a great coach but he hasn’t been given the opportunity to show it at the head coach level. Part of it is who team owners see as the face of their franchise. In football, there are two faces, your head coach and quarterback. The owners and fans have to be comfortable with having a Black man as one of their faces even if they are qualified.”

Moore outlined a few reasons why seeing Black athletes in prominent positions is so important for the country.

Seeing Black athletes succeed and play in sports shows the country what integration looks like. This integration proves that there is a way to eliminate racism in the country.

It also forces white Americans to root for Black athletes. Whether it be individual teams or America in the Olympics, Black athletes will have support from a diverse fan base.

During the time of Jim Crow and the Civil Rights Movement, activism and integration from Black athletes was key to gaining equality. 50 years laters, Black athletes have the same kind of power with the BLM movement.

“BLM is around us everyday,” Moore said. “Some people want to escape by watching some sports. The athletes don’t allow that however. They go through this everyday. These shirts and decals on the court force viewers to engage with this.”

Activism from Black athletes today may be acceptable now, but it caused national attention and criticism in 2015. Quarterback Colin Kaepernick led the charge for Black activism by kneeling during the national anthem.

The successful, talented, Black quarterback was then blacklisted by the NFL for his actions. He has still yet to play again in the league. Moore believes the same thing would have happened even if it had been a more talented quarterback in today’s Patrick Mahomes.

“I think what happened to Kaepernick was that he got caught up in the police because it was an election year,” Moore said. “Obama, Hilary Clinton and Trump all weighed in on it. This made the NFL react to the situation. If Mahomes had been the first one to kneel, hypothetically, there would have been a lot of backlash. It’s hard to say, but I think the same situation would have happened to Mahomes. If he was the first person to do it, he would have taken the fall from the situation.”

Activism from Black athletes has paved a way for change in the country for the past century. Black History Month should be a time to celebrate these accomplishments and to educate millions of people. However, in the college athletic landscape and at GVSU, Moore thinks more can be done.

“Is it?” Moore said when asked how Black History Month was celebrated in the collegiate athletics, including GVSU. “What has happened over the last few years (is that) college sports have become more conscious of the history of Black people and their college athletes. Every year I think it will continue to progress. Some of the GVSU coaches, like Ric Wesley, are on it, but I’m not sure about the others. I try to do my part by talking to a group of Black athletes (about) civil rights at GVSU.”