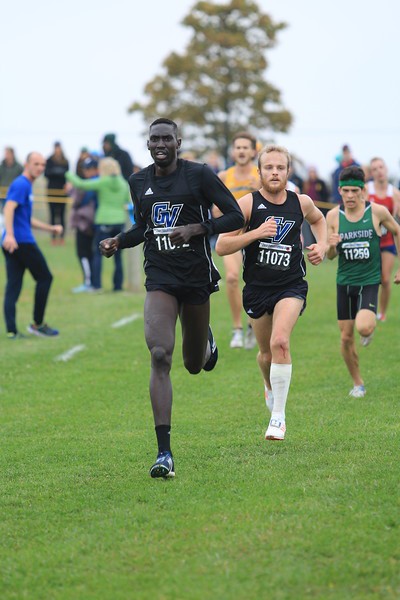 “Speed, I am speed,” once said Lightning McQueen from Pixar’s blockbuster film, “Cars”. One could say the Grand Valley State University Cross Country was speed on Saturday, Sept. 29, too.

The men took home the victory and the women placed second at the Loyola Lakefront Invitational in Chicago on Saturday. The meet was another strong showing from both sides according to GVSU head cross country coach Jerry Baltes.

With ideal running conditions at 50 degrees and sunshine, the men and women both managed to have runners finish first and second collegiality among all competitors. Senior Zach Panning finished first with an 8k time of 23:48, while sophomore Enael Woldemichael took second with a time of 23:51. Sarah Berger finished first with a 5k time of 16:57 and Allie Ludge was right behind her at 16:58 for the women’s team.

With two runners leading the pack, both teams had strong performances down the roster as well. The men’s team had five runners place from 17th to 29th with redshirt junior Joe Renner (17th) and junior Jacob Domagalski (29th) rounding out that group.

While the guys ran away from second place team McMaster 59-114, the women were outdone by solid pack running by Princeton University, who had their top five runners finish third, 10th, 14th, 15th, and 23rd. Moving forward, Baltes thinks that is what they should focus on moving forward for the women’s teams.

“I think we need to work on pack running and rolling together, not losing contact and that’s hard to do, because there are days like today where there are 400 runners,” Baltes said. “You can be two seconds apart but there’ll be 10 runners in between you and its not like you can just run up to a person and join them, you gotta weave around them and what not.”

As for the men’s team, Baltes said they could work on their pack running too.

“I think a lot of the issues are that we’re kind of racing like a yo-yo,” Baltes said. “At certain points in the race we have one guy that’ll be feeling good, they put in a surge, and they pass a teammate and then they level off for a bit and then another teammate runs really good for a stretch,”

After finishing up at Loyola in Chicago, the varsities for the men’s and women’s team will next run at the Bradley Pink Classic where they will aim to put this pack mentality to the test.

With Loyola marking the halfway point on the schedule, Baltes once again cited a pack mentality with a sense of consistency.

“If we get some guys to close some gaps and get some people racing together and staying together, pushing one another throughout the race, we can become more consistent,” Baltes said.

Both the men’s and women’s teams aim for another strong performance, as they travel to the state capital for the Lansing Invitational, hosted by Lansing Community College. The invitational is set to begin at 1:30 p.m.