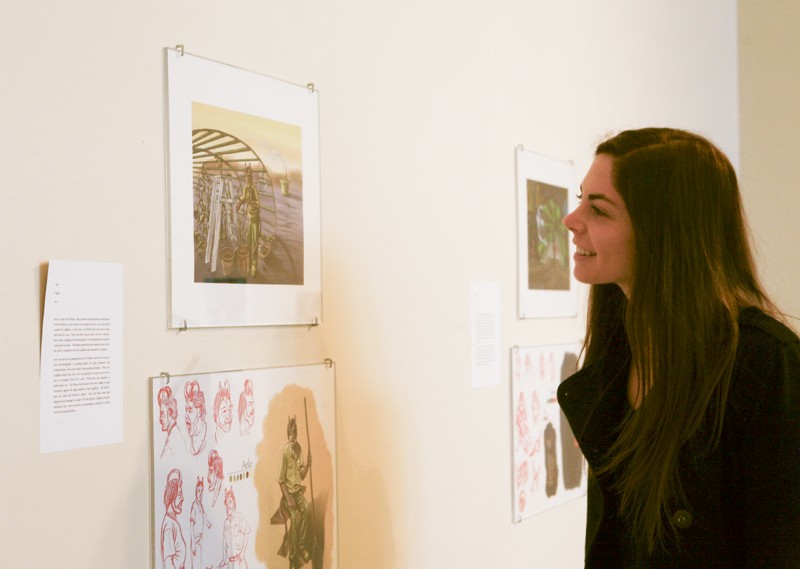 The definition of “ensorcell” is to bewitch with fascination or enchantment. Ensorcell is also the representative word for the aptly named BFA exhibit in which three Grand Valley State University students will share their illustrations.

Fine arts students Alex Deykes, Kim Allen and Rebecca Mills will hold a reception for their exhibition free and open to the public tonight from 5 to 7 p.m. in the Calder Art Center.

Each artist will showcase a unique set of artwork, but the separate pieces are also complementary.

The exhibit is in the Stuart and Barbara Padnos Student Art Gallery and closes today.

“We were placed together because we all have an emphasis in Illustration and we all have a tendency to create similar subject matter,” Deykes said.

Deykes called her classmates’ art well done and creative, saying each artist stands out through their abilities and talent.

Deykes’ work is eight pieces of digital illustration with a character design theme.

“These pieces focus on four different characters interacting in specific environments that they reside in,” Deykes said.

“I try to utilize brushes and textures that mimic traditional media to some degree, as I’ve found that a lot of digital art looks very ‘plastic,’” Mills said.

Mills said she enjoys drawing animals and educating others about wildlife by telling stories through her drawings.

“I’ve always preferred to work digitally due to both the speed of the workflow and the increased ability to edit the work in the midst of creating it,” she said.

“My illustrations for this exhibit are based on an instance of a hawk hitting a window at my house last summer and having to be taken to a nature center for rehabilitation,” she said. “I decided to make a vaguely children’s book-like narrative series of illustrations out of this event.”

The theme of Allen’s work is childhood imagination and the worlds children create through play, made in cut paper collage.

“It’s essentially just cutting and gluing paper together,” said Allen. “I’ve made the images in pairs, the first being the real life game the kid is playing and the second piece depicting what they imagine and worlds they’ve created.”

Allen is the only artist in the exhibition working without a computer.

“The other two artists showing with me both do digital illustrations,” she said. “They do incredible work that I could never imagine attempting, but I’m sure they would say the same for my intricate, hand-cut illustrations.”

The Ensorcell exhibition is a window into a college career of work for three young artists who grew into their current styles together.

“It’s been really interesting seeing their styles and subject matter evolve over the past three years,” said Mills.