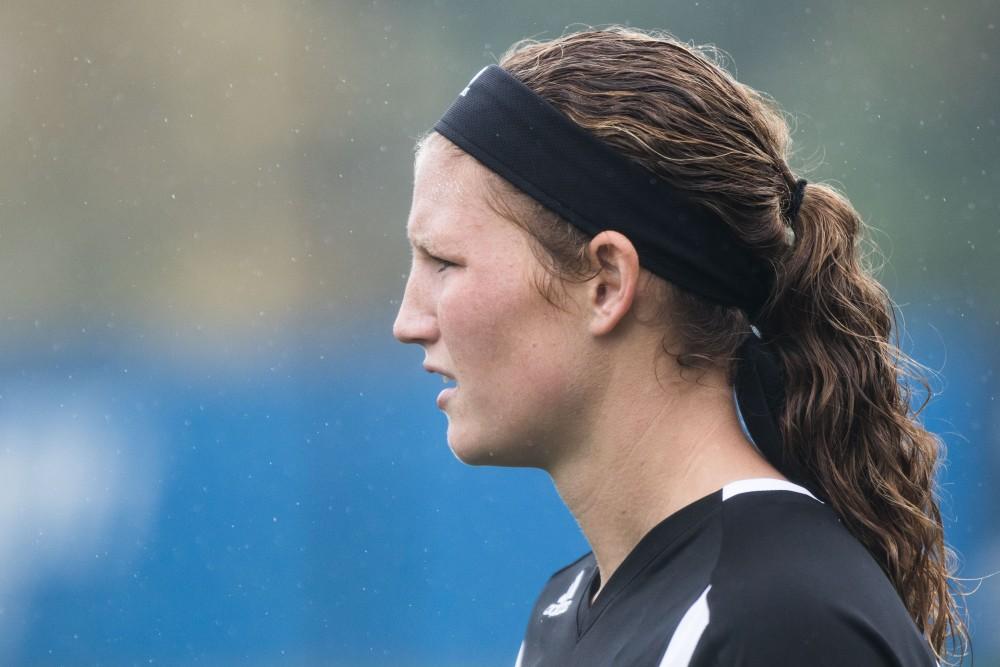 It takes serious talent to be a two-sport athlete in college. While many people play multiple sports in high school, they’re usually only good enough to advance and play at a high level in one during their college years.

Coming out of Holt High School in Holt, Mich., Tara Lierman knew she was a talented at both soccer and basketball, but made an early decision to strictly pursue soccer at Grand Valley State. Her decision paid off, as the midfielder went on to play in 100 games for the Lakers while starting in 74 of them, scoring 29 goals and handing out 23 assists. GVSU went 91-8-3 with a three national championship appearances, one national title and four GLIAC titles. Individually, Lierman was named to multiple All-American teams and maintained excellent status in the classroom.

However, hoops fever returned for the soccer star and she made an executive decision.

“She approached (GVSU basketball associate coach) Phil Sayers and said something in passing or as a joke, and coach had watched her play a little bit when she was in high school and she was a good player,” said GVSU women’s basketball head coach Mike Williams. “He knew she could play and might have said something to her and she said ‘oh, that’d be my dream’ and he said ‘you finish your soccer season, when you season is done you’ll sit down with Coach Williams and we’ll see what transpires from there.’”

This exchange came during her senior season, but the idea had been there for nearly one year. Williams insisted on Lierman finishing her soccer career and staying focused on her performance on the pitch. This did not go unnoticed by GVSU soccer head coach Jeff Hosler.

“I think (playing basketball) came up at some point after her junior year, last winter semester – just the possibility,” Hosler said. “I give the basketball coaching staff a lot of credit because they let Tara just focus on soccer and not have ongoing discussions worrying about their own program. It was just about Tara having the best experience and opportunity in terms of being an athlete all-around. I appreciate that they let it play out. They addressed it after the season so that she could focus on soccer.”

Finally, following the 2018 soccer national championship game, Lierman rested for a handful of days before hitting the court for a two-week trial period, though she was officially brought onto the team after six days as the Lakers were preparing for their 10th game of the season.

With her maturity, experience and pre-existing relationship with the players, her transition went smoothly.

“The girls were really welcoming,” Lierman said. “They had open arms and were excited to have me, so that made it really, really easy. There’s a great relationship between soccer and basketball.”

After trading her No. 8 jersey in soccer for No. 24 in basketball, the midfielder-turned-guard has appeared in three games for a total of nine minutes as of Jan. 11, 2019. During her second game, she brought down two rebounds and sunk a corner three that sent the Lakers’ bench and cheering section into a frenzy.

“It was amazing,” Lierman said. “The girls went wild on the bench so that just goes to show how much they support me being here and are just great people.”

While Lierman may not have carved out a significant on-court role yet, her impact was felt immediately by the GVSU team consisting of only one senior before her arrival.

“(She brings) three things,” Williams said. “Number one is her leadership. She’s a great leader, just brought into what we were doing. Number two, she’s a winner. She’s had success in both basketball and soccer in high school and soccer in college. She’s played in national championship games and she gives us athleticism as another player; she’s great in practice guarding our players, she’s great in practice guarding her, and in time, who knows? She’s seen steady improvement each day in practice and you never know.”

Ironically, Hosler was also a two-sport soccer and basketball player at Alma College, so he knew firsthand that his senior star would be able to make the transition. With experience comes knowledge and with knowledge comes advice, and Lierman’s first college coach had an important tip for her.

“Take advantage of the rest,” Hosler said. “They’re both very physically grueling sports, they require a great level of fitness and it takes a toll on your body. Truly, take advantage of opportunities to get rest while you can. From a tactical standpoint, she’s going to make those adjustments, but rest is a huge piece.”

With a month-and-a-half left in the regular season, GVSU is poised for the GLIAC regular season title and expect to be a favorite in the conference post-season tournament. From there, they have the makings of a national championship contender – something Lierman is familiar with.