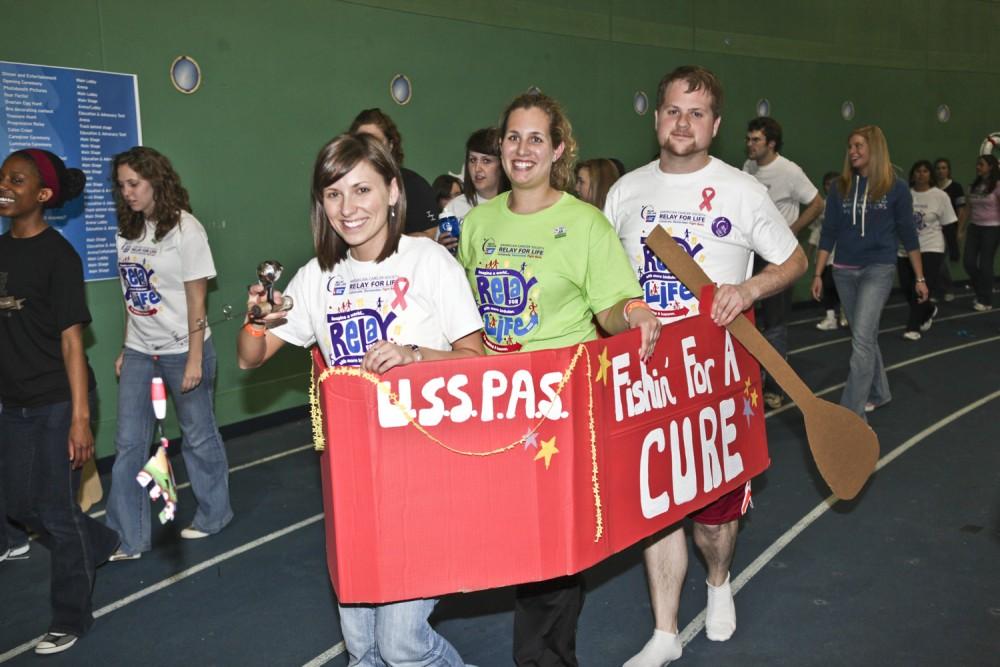 Relay for Life 2010, organized by Colleges Against Cancer, had a theme of “sailing towards a cure.”

Although students and seafarers alike packed the Fieldhouse Arena Friday night, one idea plagued the minds of all crowded into the indoor track: 8,709 of the current Grand Valley State University students will be affected by cancer at some point in their lives.

Outfitted to look similar to a dock anchored in the harbor, the stage locked participants’ minds onto the night’s theme: “Sailing towards a cure.” Colleges Against Cancer staff members donned pirate attire to stand out in the crowd and ship displays offered words of encouragement on their sails.

The Relay event brought back its main events: the caregiver presentation, the Luminaria ceremony and the more recently inducted Fight Back ceremony.

At 8:30 p.m., using her personal testimony, freshman Alysha Connelly from Colleges Against Cancer gave a presentation for the caregivers.

Four years ago with the rest of her family, Alysha Connelly listened to the final murmurs of her mother.

Deanna Connelly said the angels were calling her name and it was time for her to go.

Although Deanna had juvenile arthritis since age 8, which often affected her employment possibilities, she never let her daughter go without. Despite being a single mother receiving no child support checks and despite contracting and surviving cervical and ovarian cancer, Deanna kept a smile on Alysha’s face. Deanna did her daughter’s hair for cheerleading events and took her on adventures to doll museums hundreds of miles away in West Virginia.

But when Deanna contracted lung cancer, never having smoked a cigarette, Alysha was forced into a new role as the caregiver. As the cancer spread, she woke up every two hours during the night to give her mother some of the 37 pills necessary. Alysha, 87 pounds at the time, carried her 80-pound mother to the toilet and to the bathtub. Alysha threw out her back once and ended up in the hospital as a result.

Before her mother died, Alysha Connelly recorded some of inspirational words said by Deanna Connelly before she died: “Being brave doesn’t mean you’re not scared. It means that you are scared, but you do what you have to in order to survive. Everyone gets scared sometimes.”

At 9 p.m., participants celebrated the Luminaria ceremony, a signature event in the Relay for Life program.

Four lanterns topped the front of the stage, each bearing the classic moon and stars insignia of the American Cancer Society.

The lanterns offered four staples of the Relay. The Relay would “Celebrate” those people currently fighting cancer, “Remember” the loved ones who had lost the fight against cancer, teach Relay participants to “Fight Back” against cancer and “HOPE” for the cure.

The Luminaria, glow-stick lit paper bags with messages of loss and hope for those who died of cancer, surrounded the track as participants embarked on a walk of silence in memory of the dead and in hope for a cancer-free future.

Representatives from Colleges Against Cancer said each luminaria looked like a candle on a birthday cake. The luminaria represent a vision for our shared future: we imagine a world with more birthdays for those facing cancer diagnoses.

At 10:30 p.m., the Fight Back ceremony welcomed cancer survivor Brian Ciluffo to the stage for the first time in two years.

The last time he took the stage, Ciluffo was bald, pale and struggling in what he said was “the fight of my life.”

Two years ago, Ciluffo went to his primary care practitioner with complaints of trouble breathing, waking with sweat-soaked sheets, rashes and a constant cough. The doctor gave Ciluffo the diagnosis of a cold four times in one month.

When Ciluffo’s boss found the student curled behind his desk at work to relieve some pain, Ciluffo made a fifth appointment with his doctor. The doctor checked him into the hospital.

Surgeons withdrew fluid from around his heart – the equivalent of one quart of oil – and he was discharged two days later.

But Ciluffo had far from seen the last of the hospital.

After receiving a phone call, he returned and received a preliminary diagnosis of non-Hodgkin’s lymphoma, any large group of cancers of lymphocytes, or white blood cells.

Ciluffo was placed in critical care for 23 days, during which time he had to battle cardiac problems. He was not yet strong enough to receive chemotherapy treatments, and he could feel himself giving in to the cancer.

“Please get me out of here,” he remembered he said to his girlfriend when she visited him. “I don’t want to be sick anymore. Please.”

Soon, the doctors confirmed their initial diagnosis. It was official – Ciluffo had non-Hodgkin’s lymphoma. The cancer had advanced to stage IV and his cancer was in the t-cells, a lesser researched variety and a type that could not undergo radiation treatment.

“I remember the silence in the room, the blank stares,” Ciluffo said, recounting the moment the doctor told he, his mother and his girlfriend his diagnosis. “They were scared and so was I.”

He started receiving chemotherapy once a week, battling the nausea, pain and weight loss or gain depending on the day.

“As long as my mind and body were in synch, I knew I would be able to beat cancer,” he said. “The moment you give up is the moment you let cancer win.”

Ciluffo said one of his proudest moments came a year into his remission. At a Relay for Life, a high school friend slung an arm around Ciluffo’s shoulders and called him “hero.”

“I fought back so that my children can one day hear my story as I put them to bed on a rainy night, and they can call me their hero,” he said.