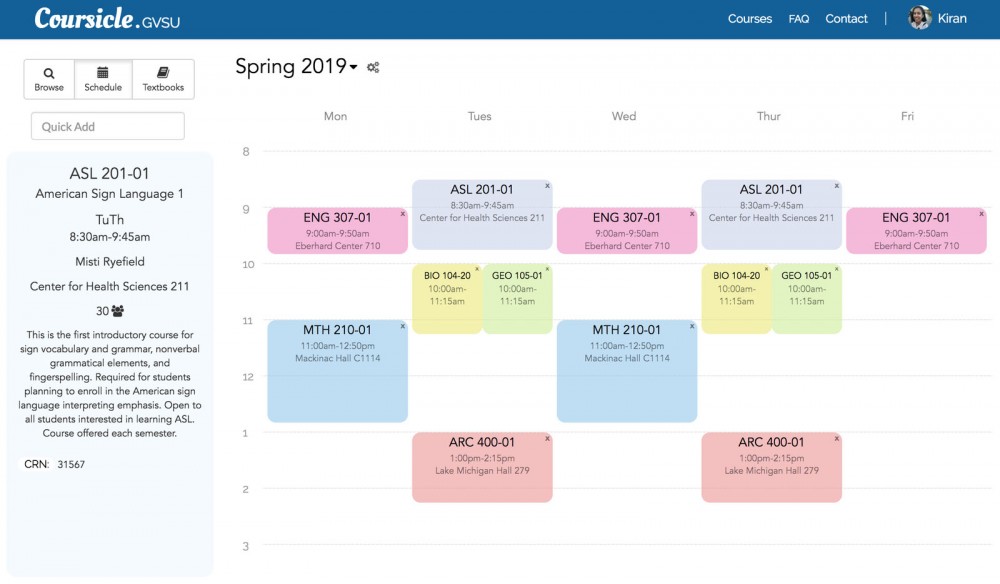 What started as an independent project and has since expanded to 830 universities has added Grand Valley State University to its roster, and is now exponentially growing its user base. Coursicle, an application created to ease the course registration process, has quadrupled its user base at GVSU from last semester to now, with numbers still rising.

Coursicle offers two services to students at GVSU: providing a user-friendly layout during initial schedule creation and notifying students when seats open up in full courses. Both a web-based and phone application, Coursicle is fully compatible with all courses offered at GVSU. Co-founder Joe Puccio said that between the two services, the app’s ultimate goal is to tackle stress.

“We really wanted to reduce the stress and tedium around the registration process,” Puccio said. “Specifically, we set out to create an intuitive, simple course search with built-in schedule planning, so students wouldn’t have to plan out their schedule by hand or in Excel. An important secondary goal was to create a product that people would truly enjoy using.”

Puccio, a University of North Carolina graduate, said that the creation of the app stemmed from his own difficult experience with getting into classes, a problem he found he shared with other students.

“When I was an incoming first-year at UNC, I spent several hours trying to plan out my class schedule, and then when I finally went to register for my classes I got into only one of the five I needed to take,” Puccio said. “So that night, I started working on a program that would text me when a class I wanted had an available seat.”

Following the creation of the application’s course notification functionality, Puccio said he was approached by friend and co-founder Tara Aida, who suggested the duo work to solve another issue pertaining to most college students: schedule creation. The duo said the nature of most university scheduling websites make it difficult to coherently create a schedule that doesn’t overlap.

“Part of the reason this task is so arduous is because the software the university provides to search for classes is usually very outdated and tedious to use,” Puccio said. “So, Coursicle really came out of a pain that we as well as our friends were experiencing while we were students.”

Puccio said that word of mouth quickly grew users from just his team to nearly 2,000 students after the app’s first two semesters. From there, he said Coursicle’s expansion to other universities, like GVSU, has been over overwhelming, but encouraging.

“We started sending so many texts Verizon started blocking us,” Puccio said. “(So) due to increased demand for our text service last year, we had to switch over to an iOS and Android app to send push notifications.”

Currently, Coursicle includes GVSU as one of its 830 compatible universities and colleges, but Puccio said that because there are still over 5,000 requests from students to integrate their school, there is plenty more work to do.

At GVSU specifically, Puccio said that new functionality to have users earn a premium account for free through using a sign-up link is key to spreading Coursicle and ultimately combating stress surrounding course registration.

While goals for Coursicle include expanding its user base and incorporated schools, Puccio said he is still pleased with what the formerly small project has become.

“I think we’ve succeeded in reducing some of the stress and a lot of the tedium, but of course we still have many more schools to add support for,” Puccio said. “Our goal with the app is to give students a better shot at getting into classes that fill up quickly, without having to refresh a website constantly over the course of months. I think our focus on these goals is really what has led to so many students using Coursicle.”