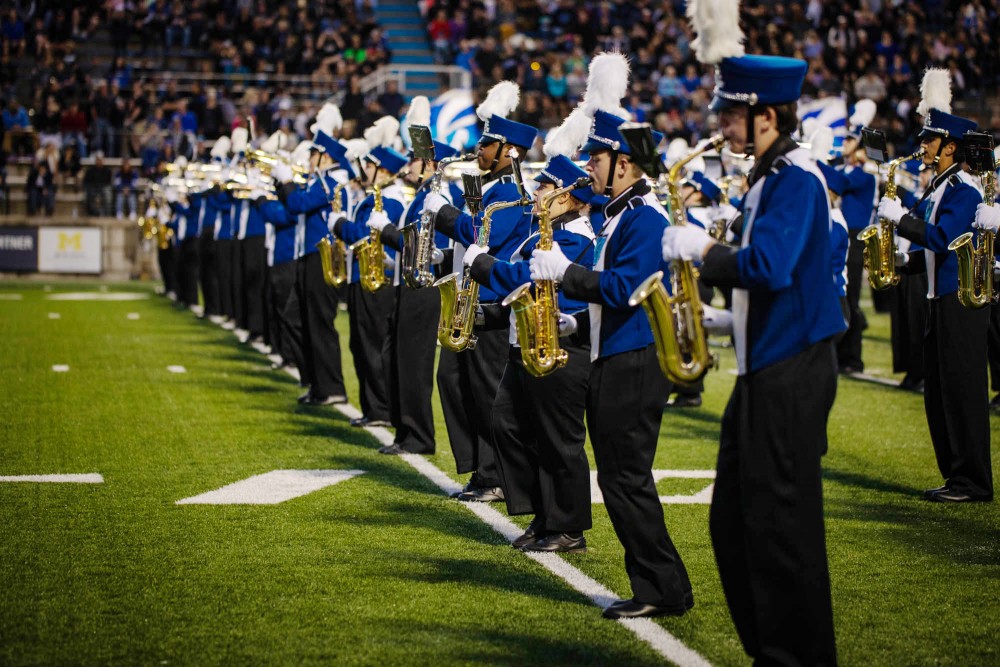 With band camp and football games around the corner, Grand Valley State University’s Laker Marching Band has selected three drum majors for the 2019 season. The process began earlier this semester through applications, interviews and auditions, with Alyssa Hawker, Sean Miller and Hana Smith taking on the drum major role.

As the highest leadership position in the band, drum majors conduct during the show, relay information to students and serve as conflict management. This position requires students to commit music, drill pages, cues and rehearsal numbers to memory. With the marching band being student-led, director John Martin said he is able to step back and let students work together.

“Game days are theirs,” Martin said, adding that drum majors handle a majority of the logistics at games, including setting parade blocks, arranging seating in the stadium and conducting stand tunes.

Members who have completed one year with the marching band are eligible to apply for drum major, regardless of major or experience. The process of applying for drum major coincides with that of student leadership. Applicants must first pass a test on the marching band’s handbook before undergoing interviews with Martin and assistant director Whitney Brainard.

Drum major applicants continue the audition process by submitting conducting videos for review. Those who advance to the final round of auditions direct a portion of the previous season’s members, who volunteer to play and vote on the applicants they liked best. Martin said that there was a record high this year, with 120 students in attendance.

Martin said that 11 students applied for drum major, with nine advancing to conduct the band. He said that allowing students to vote, along with applicant interviews and conducting auditions, lets students have a voice in the leadership selection. While Martin knows the drum major applicants through their time with the band, he said that the interviews give insight into their leadership style.

Since drum majors are often members’ first point of contact, this decision is not taken lightly. Martin emphasized the importance of students trusting and respecting the drum majors, as the culture of the band can be influenced by its leaders.

Martin said that before working with the Laker Marching Band, directors conducted the halftime shows, but he wanted students to get experience and work with their peers through the drum major position. The drum majors both encourage closeness between students and give him insight into the band’s state during rehearsals.

“There’s more a sense of openness, and acceptance and inclusion,” Martin said. “They gauge all that for me. They’re my eyes and ears on the field.”

Junior statistics major Alyssa Hawker said that her decision to audition for drum major was influenced by her role as mellophone section leader and previous conducting experience.

“I was a drum major in the past, so I’ve just kind of had to brush up on my old skills,” Hawker said. “I just went at it, tried my best and ended up getting it.”

Hawker’s goals for the upcoming season reflect the friendly atmosphere that Martin aims to create. In addition to cheering on the football team, Hawker said that she wants to emphasize this connection between members.

“I want it to be a really welcoming environment, because when I was a new member, I was really stressed at first but as soon as I made friends, I just knew that it was my home,” Hawker said. “So I just want to create that sense of home and family for everyone.”