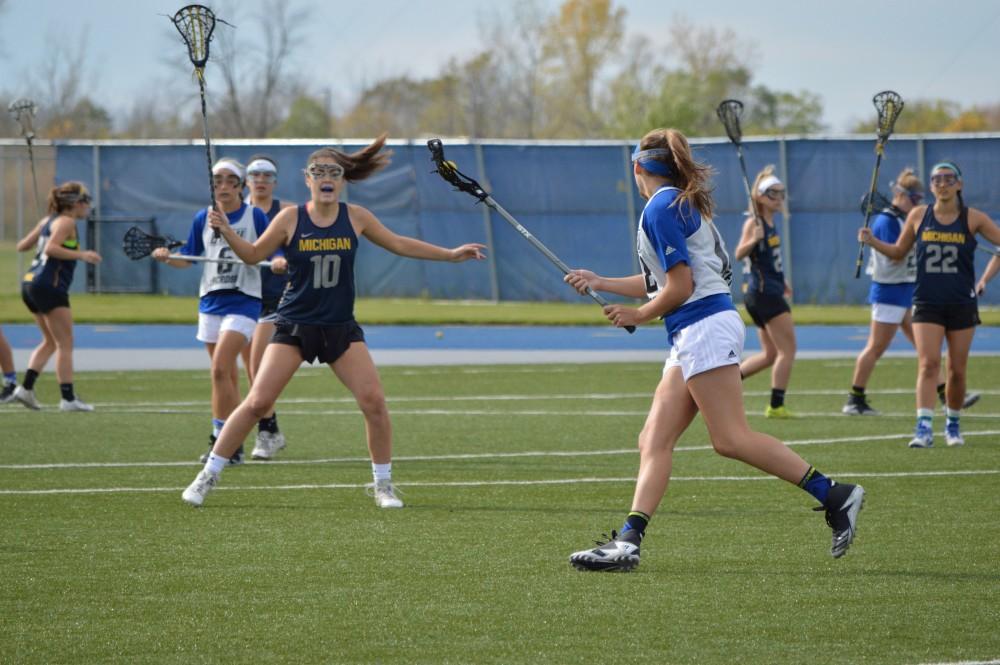 After a solid fall season, the Grand Valley State women’s lacrosse team took home their last win of the season after sweeping University of Michigan (club) Saturday, Oct. 21, at the GVSU track and field stadium.

The Lakers had a slow start to the final game of the season but quickly turned their motivation into fuel and kicked into overdrive, defeating the Wolverines by a dominating 27-5 finish.

GVSU scored their first goal of the game a minute into the first half. The goal was scored by senior attackman Ashley Bailey, one of five scores for her in the game.

Carly Shisler managed to put 4 points on the Lakers’ scoreboard, placing her behind the leading scorer Bailey, who contributed 6 points.

“Honestly, we needed to just find the motivation inside of ourself and really pick things up as a team ’cause we weren’t clicking and firing on all ends, so we really needed to find that, and then it got way better in the third half,” Shisler said.

GVSU was able to find a place and playing time for each player on the team, which is something the Lakers value. They were able to work together out on the field knowing they had each other’s back off the field.

“Everyone on the team plays an important role on the team,” Shisler said. “And it doesn’t even matter who’s on the field, but everyone works very well together.”

Despite their lack of drive in some areas, the Lakers used their other skills to take home the sweet victory. GVSU had to put their visual communication skills to the test: After gaining possession from playing aggressive defense, the Lakers found one another, creating smooth open passes that led to offensive scores.

“Our shot selection was much improved,” said Alicia Groveson, who is in her sixth season as head coach. “It wasn’t something that we’ve been super spectacular of. We really worked very hard this entire fall, so to work on that and to see a lot of people take some quality shots is good.

“Transition passes looked pretty solid, and that’s something we’ve continued to work on as well. I’m pleased with those two aspects.”

The Lakers knew how to end the season strong: They came back out onto the field ready to show the Wolverines their best. They were more focused during the final half of the game, keeping their eyes on the ball. The Lakers attacked their opponents’ net while defending their territory.

One of the challenges the Lakers had to deal with was changes to the rules of women’s lacrosse. The Lakers plan to use the offseason to snap back and adjust to these changes.

“With the new rule changes that we’ve seen with free movement, you don’t stop really anymore in this game,” Groveson said. “So conditioning is super important. We have to be fit. If you’re not fit, this game is going to be raw ugly.”

Neumen believes the Lakers are capable of doing more next season, and now GVSU is ready to continue the journey and start preparing for the rigorous spring season.

“Going off what we did last week at CMU, I think that this upcoming year has a lot of potential, and I think that we have good room for growth,” Neumen said.