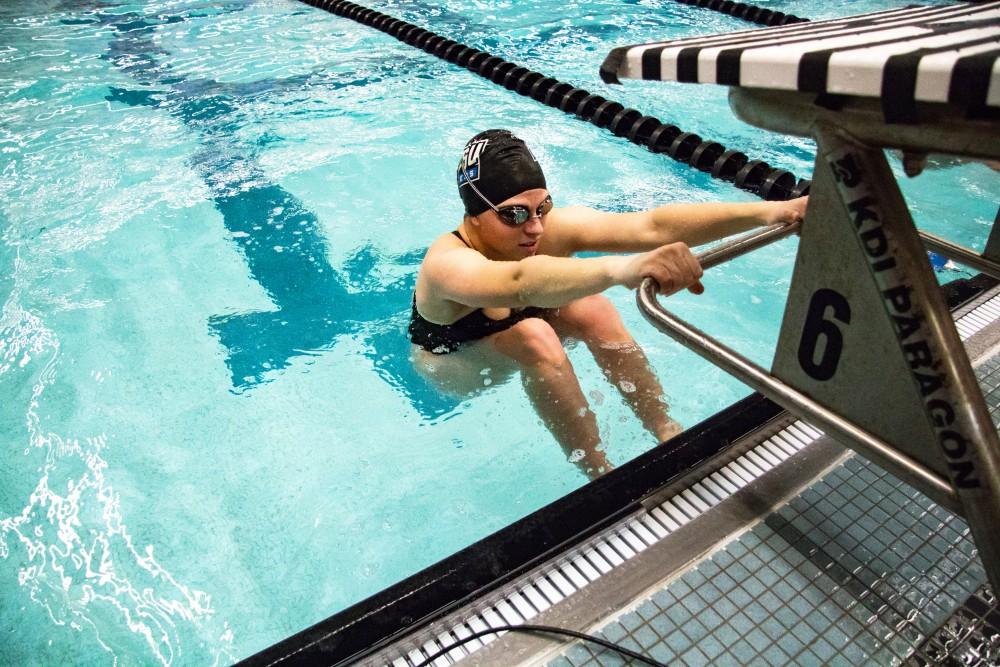 Christmas came early this year for Grand Valley State’s swimming and diving as they entered the holiday season.

The Lakers took a quick bus ride to Grand Rapids to compete against eight different schools in the Calvin College Invitational on Thursday, Nov. 30, through Saturday, Dec. 2.

GVSU placed first for both men and women over the three-day invitational. The women finished with a total team score of 1,772.5 points, while the men totaled 2,100 points. For the women’s meet, Northern Michigan University came in second with 1,566.5 points, followed by Calvin College scoring 1,334 points. For the men’s meet, NMU had 1,994 points, and Calvin College took third with 1,080.5 points.

While the victory for the Lakers was encouraging heading into the winter break, both teams were able to obtain other achievements, such hitting multiple NCAA provisional marks in diverse events.

The Laker men took six of the top nine spots in the 200-meter individual medley and tallied one NCAA provisional time. Junior swimmer Marius Mikalauskas finished second and hit an NCAA mark with a time of 1:50.84.

Head coach Andy Boyce, who is in his ninth year with the program, had a front-row seat to many record-setting moments.

“It’s nice to see a lot of season-best times and a lot of lifetime-best times … and the team working hard to get the win,” Boyce said.

Both teams cut back on the workouts for about a week to allow their bodies to rest and be fresh for the meet. GVSU focuses on the preparations to compete in the meet, but they tend to lean on good faith.

“We always hope for good times, and generally we have great times at this meet,” Boyce said. “This year it was more of the same. The diver dominated on the boards, both men and women. Majority were in the top eight and scoring a lot of points.”

Among the eight teams that participated in the Calvin College Invitational, there were both Division II and III teams. Multiple teams from the GLIAC also participated, allowing GVSU to overcome individual challenges.

“It was a nice mix,” Boyce said. “You know whenever you put eight teams together you get the best of the best, and it made it so that we had people that were challenged in each event, and we rose to the challenge.”

Competing in the invitational was a learning experience for the Lakers.

“I think this really opened people’s eyes up a little bit as to how fast they can go and how much better they can get as we move towards the conference championship,” Boyce said.

The GVSU swimming and diving teams have had arguably strong seasons so far, but now it is time to focus on ending the academic semester strong. The Lakers are now switching gears to prepare for finals week, which will start Monday, Dec. 11.

After finals are out of the way, the Lakers will be back in training mode over winter break. Coach Boyce believes the training should help in preparations for conference championships.

“We’ll be going on a training trip over the winter break,” Boyce said. “And I think that’s a good time to increase our training and improve ourselves as we head towards conference championships and, for those lucky enough to qualify for Nationals, the Nationals Championships.”

The GVSU swimming and diving teams have a few weeks off before heading to Florida for holiday training held Wednesday, Dec. 27, through Wednesday, Jan. 3, just before they head to Detroit to compete against Wayne State on Saturday, Jan. 6.