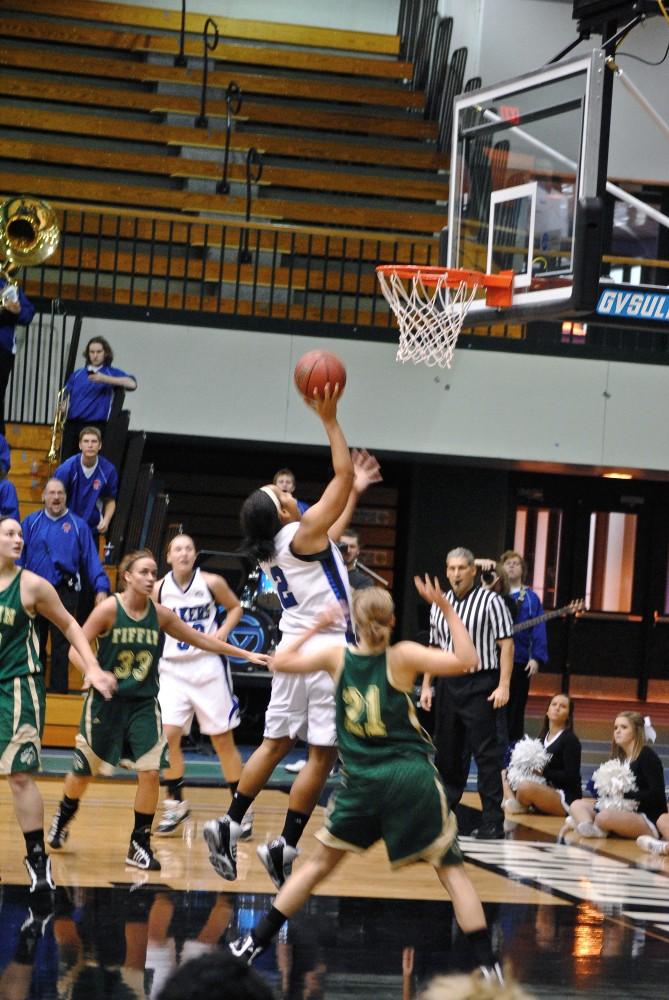 GVL Archive / Rane Martin Sophomore Brittany Taylor goes up for the shot during a game earlier this season. The lady Lakers were victorious 67-65 against Hillsdale this weekend.

The GVSU women’s basketball team returned to their winning ways on Saturday, snapping a two-game losing streak by defeating conference rival Hillsdale at the Jesse Phillips Arena in a 67-75 comeback thriller.

The Lakers improved to 12-3 overall and 6-3 in the GLIAC after erasing a nine-point halftime deficit en route to outscoring the Chargers 47-36 in a strong second half.

While GVSU improved to 6-1 on the road this year, this was a pivotal marquee matchup, with both teams coming in at 5-3 in the GLIAC standings. An impressive road win keeps the Lakers biting at the heels of GLIAC North division leaders Michigan Technological University and Lake Superior State University.

“A road win in conference play is always very important,” head coach Janel Burgess said. “Being on the road, the kids focus on each other, and we play with a sense of grittiness. In the game, that helped us get some key defensive stops leading for transition offense. We finished key offensive possessions and displayed a lot of our toughness and heart.”

The Lakers trailed 29-20 at the half before exploding for 47 points while shooting 60 percent from the field in the second half. An 80-percent free throw clip for the game helped in downing the Chargers, as the Lakers went 16-of-20 from the charity stripe.

“We focused on what we needed to do at both ends of the court in order to get better,” Burgess said. “From there, it was all about finishing both our offensive and defensive possessions.”

The Lakers were lead by a strong rebounding performance as they beat Hillsdale 40-27 on the boards and pulled down 13 offensive rebounds. Rebounding has been key to the team’s success all season — the team boasted a 9.5 rebound per game advantage before beating Hillsdale by 13 in that category.

A strong performance by twin sophomore sisters Briauna and Brittany Taylor lead the way for the offensively packed second half performance for GVSU. Briauna Taylor paced the team with team highs of 16 points and seven rebounds for the game while converting a perfect 6-of-6 from the free throw line. Brittany Taylor collected 12 points, five rebounds and two steals coming off of the bench in just 10 minutes of play on the court.

“We knew we had to come out more aggressive and focused as a team,” Briauna Taylor said. “We need to keep up the same intensity, keep helping out our teammates and really just play our game.”

“(Briauna and Brittany) gave us some very solid play,” Burgess said. “Their rebounding was huge, they were solid in the low post, their overall competitiveness was great, as was their physical play and they really gave us a lot of energy.”

The Lakers will look to take advantage of a three-game home stand starting on Thursday as Northern Michigan University comes to town. In a potential GVSU game of the week on Saturday, the Lakers will welcome GLIAC leader and rival Michigan Technological University.