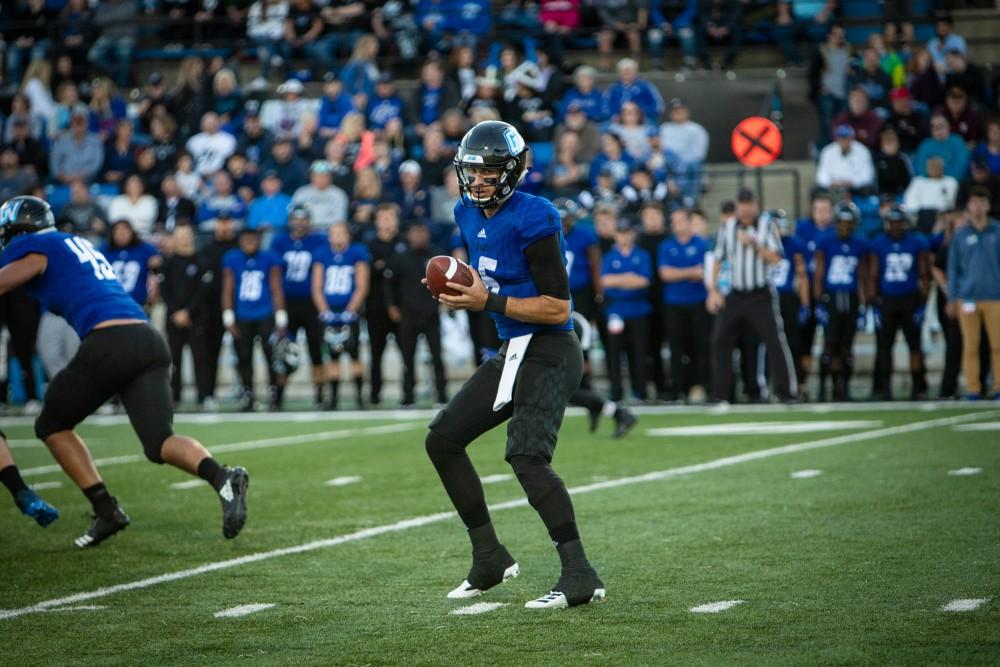 Thanks in part to the new all-time school touchdown pass leader Bart Williams, the No. 5 Grand Valley State Lakers (4-0, 2-0 GLIAC) defeated the Michigan Tech Huskies (2-2, 0-2) by a score of 45-20 in front of 16,671 fans – the second largest crowd in Lubbers Stadium history

Williams threw five touchdowns – the second of which passed Curt Anes for the top spot among all GVSU players – along with 382 yards on 23 completions in 37 attempts.

Remaining humble as ever, Williams preferred to praise his pass catchers and offensive line and rightfully so: seven different Lakers caught passes, led by Nick Dodson with five receptions for 88 yards and two touchdowns. Austin Paritee and Jack Provencher each caught five passes, Brandon Wadley and Chawntez Moss grabbed three apiece while Jalen Bryant and Pete Cender reeled in one each. Provencher caught two scores (along with one rushing) and Cender’s lone catch was a 20-yard touchdown.

“We had a lot of guys on offense, especially skill position players, that are very dynamic and do a bunch of different things and I think it’s tough for a defense to scheme us up in the pass game or in the run game because we can do so many different things with different guys,” Williams said. “We have some really good playmakers.”

That was only the air attack. On the ground, Moss took 16 carries for 96 yards while Provencher picked up 68 yards on 13 attempts. Overall, the offense accrued 589 yards of total offense, their most of the season so far while still not yet committing a turnover in 2018.

The 45 points and nearly 600 yards would not have been possible without strong play from the offensive line, though, who allowed zero sacks, one tackle for loss and only three quarterback hits.

“They do a great job. Every single day at practice, every single game, I don’t know how they can sit in the trenches like that for 60 minutes and we’ve got some tough dudes down there that really want to win,” Williams said. “I threw that second touchdown of the game and the first guy and the most excited guy was Ben Walling running down and giving me a hug. All those dudes, playing their heart out, wanting to win.

“Obviously they’re not going to be the ones in the paper with the statistics but they’re just as excited when Nick Dodson gets in the end zone as Nick Dodson is.”

GVSU stifled MTU’s offense by eliminating their rushing attack, as the Huskies ran for only 54 yards on 24 attempts. Coming into the game, they averaged 106.7 rushing yards per game.

“We had a really tight box; we didn’t let them get their run game going,” said head coach Matt Mitchell. “I think in the first half, (MTU quarterback) Will Ark was kind of eluding some stuff and getting on the edge so when he was scrambling to throw we struggled a bit with that. Our defensive staff, our defensive players will watch the tape and continue to learn but we really shut down the run tonight which is kind of a staple of Tech and did a good job that way.”

The defense wrapped up six tackles for loss and sacked Ark twice while managing to get six quarterback hits from six different players.

“I think every week, our coaches do a good job of game planning and finding matchups that they like and every week our front seven – especially our front four – has a lot of confidence that one-on-one not a lot of guys can block them,” said linebacker Tyler Bradfield. “I think they do a great job getting pressure. Credit to our coaches for putting us in that position and we’ve just got to finish plays and make them.”