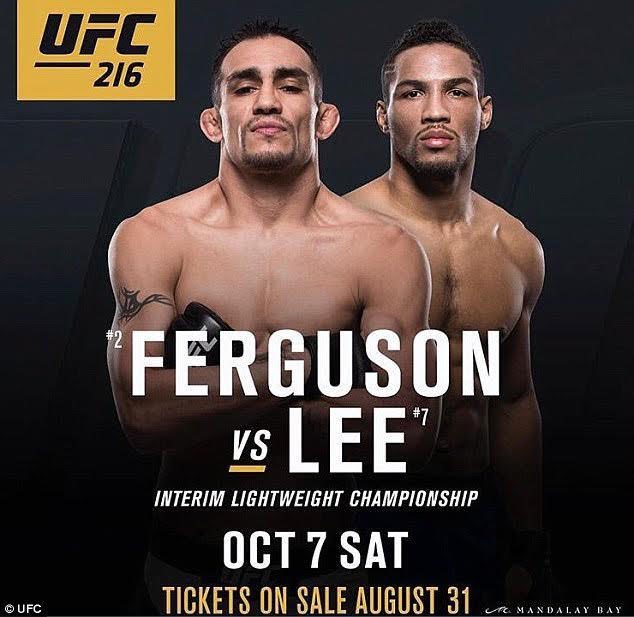 Here are some numbers:

Since 1963, more than 710,000 students have enrolled at Grand Valley State University according to the GVSU Office of Institutional Analysis.

In the Ultimate Fighting Championship (UFC), home to the world’s greatest mixed martial arts (MMA) competitors, there are currently 556 fighters, 86 of whom compete in the lightweight category (capping out at 155 lbs), arguably the most talented category in the UFC.

While the correlation between the number of GVSU students and UFC competitors may seem completely unrelated, there’s another statistic that GVSU fans may not know: There are two former GVSU students who currently compete in the UFC—Tony “El Cucuy” Ferguson (23-3 MMA, 13-1 UFC) and Kevin “The Motown Phenom” Lee (16-3 MMA, 9-3 UFC)—both of whom are former members of the GVSU club wrestling program.

To top off this unlikely scenario, both of the former GVSU club wrestlers faced head-to-head in UFC 216  for the “main event” Interim Lightweight Title Saturday, Oct. 7, in Las Vegas.

Having coached both fighters “up close and personal” at GVSU, head wrestling coach Rick Bolhuis was put in a weird spot on which former talent to root for on Saturday.

“It’s a really cool spot for me to be in as their former coach, but it’s definitely strange,” Bolhuis said. “My hope is that the fans of UFC get an awesome fight. It’s a win-win situation for me as a coach, and I’m excited for them to highlight their multiple years of experience leading up to this moment.

“I’ve been with Grand Valley wrestling for 16 years now as a player or coach, and I’ve been around wrestling since I was five years old, and I’m 36. These are two of the toughest human beings I’ve ever met. I can’t even describe the absolute toughness that they have.”

After the two had an on-air altercation months before the planned fight, buzz formed around the UFC world about the possibility of the two actually squaring off in the octagon. Luckily for fans, UFC President Dana White answered the fans’ demands, arranging for the two to fight in the main event of UFC 216 in a press release Tuesday, Aug. 29.

Whether due to the “smack talk” screaming matches at press conferences to promote the match or their breathtaking combat skills in the octagon, UFC fans weren’t disappointed with the overall battle between the two former Lakers.

After a lethal triangle choke, the 33-year-old Ferguson forced the 25-year-old Lee to tap out late in the third round, claiming his 24th career victory and first title belt in the UFC Saturday, Oct. 7.

The lightweight title belt was previously held by world-renowned fighter Conor McGregor, but McGregor had to relinquish the title after deciding to head into the boxing ring for one fight against the undefeated Grand Rapids-native Floyd Mayweather.

But before the spotlights and the headline-making fights, both Ferguson and Lee had one thing in common: they both started their fighting dreams on the mats of GVSU club wrestling.

During Ferguson’s 2006-07 season, current head coach Bolhuis entered his first season on the Lakers’ coaching staff as an assistant. The two worked out together in the gym, giving Bolhuis firsthand encounters with the future UFC title holder.

“I came on staff for Tony’s second year, and I was about the same exact size as him,” Bolhuis said. “I had a chance to work out with him on a regular basis. He’s incredibly gifted and works very hard-nosed.”

Although wrestling was something Ferguson clearly excelled at, the idea of competing in a combat sport was one that had lingered through his mind since he was a little kid. In the peak of his physical condition, Ferguson decided to leave GVSU before graduation and pursue his MMA training in California.

As a someone who saw Ferguson’s potential up close, Bolhuis couldn’t be angry with the Muskegon native’s decision.

“(Ferguson) eventually sat us down and flat out said, ‘I’m gonna go to the UFC, and I’m going to win a belt,’” Bolhuis said. “We all supported him because we knew how talented he was. And he saw it through to at least have the opportunity.”

In 2011, Ferguson signed with the UFC, marking the first step toward achieving his goal of collecting a title.

Just a couple of years after Ferguson’s GVSU departure, in came another promising freshman to the Laker wrestling club, Kevin Lee, who joined the program in 2010. But unlike his successful predecessor, Lee came into the program with little experience on the wrestling mat. Lee’s only wrestling experience came from his junior and senior years at Southfield High School.

“As far as wrestling goes, Kevin was in a totally different spot than Tony,” Bolhuis said. “He was incredibly raw and didn’t know much yet.”

Although Lee lacked experience, the coaching staff noticed that his physical capabilities were unlike any other that they had in the program. With his uncanny agility and strength, the coaching staff began matching him up with the strongest teammates in practices and matches early in his wrestling career. Even though Lee entered with little experience, Bolhuis couldn’t believe how fast he absorbed the physicality and strategy of the sport.

“Kevin is just an incredibly intelligent guy, and it showed how he picked up this sport so quickly,” Bolhuis said. “Not only wrestling, but he had book-smart intelligence and then all these other business and street smarts to make up who he really was.”

Lee wrestled with GVSU from 2010 through 2012. During his time with the team, Lee took on the “thickest competition” in program history. Although he never earned the title as an All-American, Lee competed against the top 16 wrestlers in the country and qualified for a national tournament.

During the 2011-12 season, the Detroit native began his fighting career in amateur mixed martial arts. While also practicing with the Lakers on his groundwork, Lee began training in boxing and in Brazilian Jiu-Jitsu, a martial art that focuses on grappling and ground fighting.

All of these various training regimens led up to Lee’s ultimate goal to compete in the UFC.

Although he was a semester away from finishing with a degree in biomedical sciences, Lee decided to leave school early in order to commit his full concentration in preparation for his combat career. On the heels of an undefeated amateur career, Lee turned professional in 2012 and signed with the UFC in 2013.

Although the two fighters only had brief careers with the Lakers, the basic fundamental skills harnessed through GVSU’s wrestling program provided the necessary building blocks to launch their fighting careers.

“A lot of the best fighters in the world right now, in any of the associations, have wrestling backgrounds,” Bolhuis said. “Right now in the MMA, most experts believe that wrestling is the top art that fighters are drawing from, that in general, wrestlers have done very well in the UFC in that field.”

While their stories appear easier said than done, the major similarity between the two lies within their work ethic during training.

“The two are the ones that have accomplished the most, and they’re not coincidentally the only two that have pursued it as a career at GVSU,” Bolhuis said. “We knew how hard they work.

“They’re always learning wrestling in the room. It’s always going back to basics and creating that muscle memory. Wrestling is not a complicated sport. It’s just about learning through repetition.”

The odds of two GVSU wrestlers taking the same route and competing in the professional spotlight are so slim that it may never happen again. But for coach Bolhuis, even being involved in some way in their lives has helped define the potential of the GVSU program.

“I’m just proud of the opportunity we’ve given them to become professional,” Bolhuis said. “They took a nontraditional route and made the best out of it.”

As for Ferguson, there’s one more task he wants to overcome in the UFC: defeat McGregor for a full claim of the lightweight title belt. While McGregor is undoubtedly one of the greatest UFC fighters of all time, “El Cucuy” believes he could not only defeat but embarrass the Irishman.

“I’ll ankle pick him, no problem,” Ferguson said during his post-fight press conference. “I’ll set him on his (expletive) on the ground. Conor McGregor poses no threat to me, especially when I hit him with the jab.”