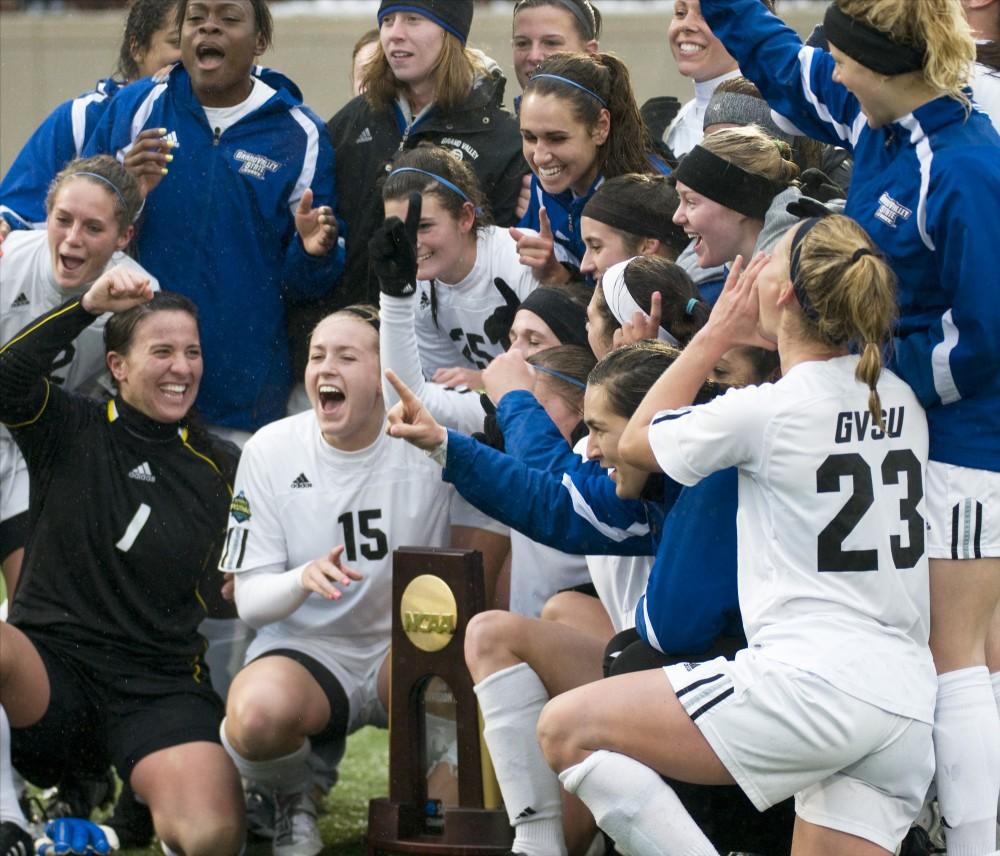 With the team’s eighth consecutive NCAA Final Four appearance, the Grand Valley State women’s soccer team has a chance to become the top program in the Division II ranks in terms of the most national championships. GVSU is currently tied with Franklin Pierce with five national championships each.

The GVSU soccer program is a dynasty, winning five championships in seven years and in each of the past three seasons. The first came in 2009, but the dynasty was built years before that team held the trophy at the end of the year.

After just missing the NCAA Tournament in 2002, the Lakers welcomed a new coach that would quickly turn the team into perennial contenders. Dave DiIanni, now the head coach of the Iowa women’s soccer team, made an immediate impact on the program and built a culture of success.

“The biggest thing was to be able to try to create expectations,” DiIanni said. “I was blessed with having a great senior class (my first year).”

In his first season, he guided the Lakers to their first NCAA Tournament appearance in program history. Having a strong senior class has been a common theme in the GVSU program for almost a decade.

For the next couple of years, DiIanni used the experience and success of the upperclassmen to attract recruits. In his second year, DiIanni landed a major recruit and possibly the biggest recruit in program history, Katy Tafler.

Tafler, a Canadian native, brought a dynamic goal-scorer to the team right when she entered the lineup. The highly touted recruit chose GVSU over a number of Division I schools she was looking at it.

“Of all the visits, Grand Valley was the only Division II program,” Tafler said. “It was a difficult decision between what I felt was right and what other people felt was right. I had such a good feeling about Grand Valley and I ended up picking it.”

She led the Lakers to their first NCAA National Championship appearance in 2006. By the time she graduated in 2008, Tafler was the leading points scorer in GVSU history and third all-time in Division II with 114 goals and 269 points.

“She had a knack for getting herself in the right places,” said former player and current assistant coach Kristen Walker, formerly Kristen Eible. “She could carry our team given any sort of situation or opponent.”

The success the 2008 class achieved in four years brought more talent to the GVSU program.

“That created the foundation that led into the 2009 class of Ashley Botts and Kayla Addison,” DiIanni said. “As (the current players) speak of, they speak of the legacy before them and the players that they aspire to be, Katy Tafler (and her class) was one of those people and one of those classes.”

By the time Tafler left, the GVSU soccer program was known nationwide, but it faced another obstacle. With Tafler and the 2008 class leaving, it was unknown how the team would perform after losing that type of talent.

“I think part of the reason that team had the success that it did was because part of the legacy that Tafler’s class left behind,” Walker said. “Everybody said that Grand Valley wasn’t going to be good anymore, that we lost all the best players. I think that just really motivated all the girls.”

The 2009 team proved everyone wrong by making it back to the Final Four and bringing home hardware for the first time in program history. A vital part of the 2009 championship run was the talented freshman class that replaced the departing seniors.

Freshmen Ashley Botts and Kayla Addison both led the team in points that season.

“The culture that has been created here and the want to really get to know your teammates and embrace your teammates regardless of what class they are in,” Walker said. “Obviously we had a lot of talented freshmen that year, and we knew that they were going to help us.”

The 2009 freshman class continued success the next three years, winning another championship in 2010 and two final four appearances the next two seasons. Botts (67) and Addison (58) finished third and fourth respectively in most goals scored in GVSU history. The success trail blazed the success of the current senior class.

“It solidified all the work and effort that we put in to maintain the traditions that were already at Grand Valley,” Botts said. “It sets the groundwork for the class younger than you moving forward that they know what they want to get back to. We would have never guessed that the one we got in (2009) would have led to these girls doing amazing things now.”

The class with Botts and Addison had similarities to the current senior class, having players that made an immediate impact freshman year and continued success the rest of their collegiate careers.

“They are similar to the class that is graduating this year,” DiIanni said. “They fed off one another, they were all very competitive individuals, and when you have a competitive greatness that exudes among a class, you want to be successful together.”

No one understands the similarities between the classes better than Walker, who has played with the former class and coached the current class. She is reminded of the past classes every day with the team now.

“I see it every single day,” Walker said. “I see it in the different personalities and characteristics in some of the players (and in) their work ethic.”

The current class had made a name for themselves, but they have the previous classes to thank for starting a tradition and culture of winning in the program.

“One of the best things that Grand Valley soccer has going for them is the belief that they should be successful and they should be there in the end because they work harder than everybody else and are more committed than everybody else,” DiIanni said. “It’s a culture that’s been created so that whoever comes into it, understands that it’s the players who invest in setting the high standards in everything they do. That’s why it’s been so successful for the last 14 years.”