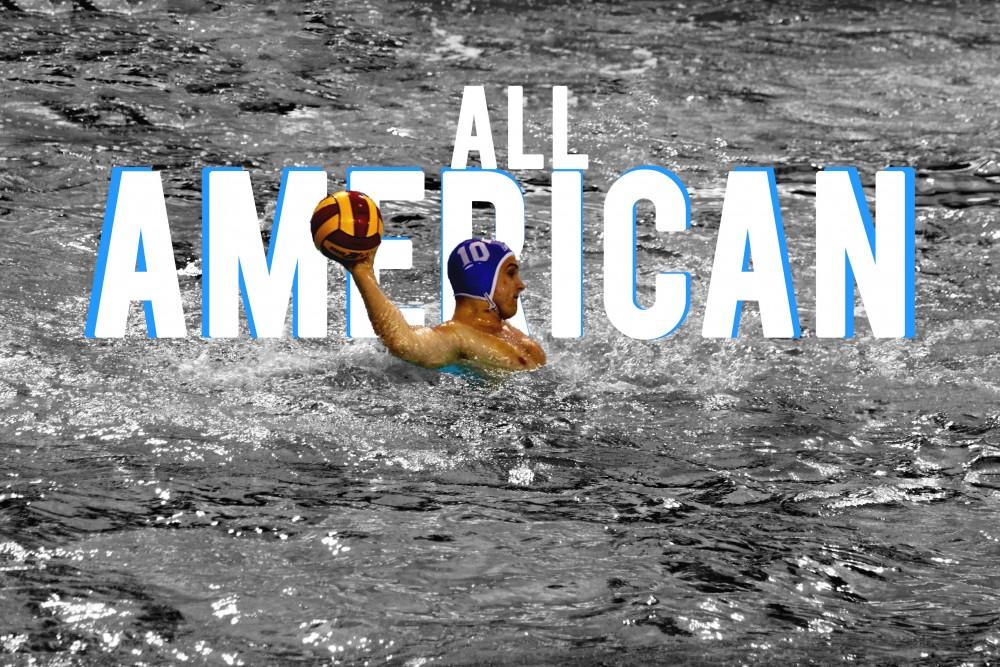 “It’s the biggest honor that we could get in this sport,” Kleinfeldt said. “Typically GVSU has a really good water polo team, but we don’t see that recognition on a national level.”

The trio of honorees is a young group. Both Davis and Kleinfeldt are sophomores, while Kunzi is only a freshman. The three teammates are a closely knit pack, which could be surprising considering their journeys up to this point.

Davis, a Rockford, Michigan native, first started playing water polo in third grade. The 2015 All-American honorable mention did not choose to attend GVSU for the water polo program, though.

“I wanted to go here because they have a really good occupational therapy program,” Davis said. “I want to have a good undergrad degree to get into the grad program here.”

When the sophomore arrived at GVSU, however, there was one major group he had to join — the water polo team.

“I love water polo,” Davis said. “I’ve invested a lot of time in it. Also a bunch of my friends came here to play.”

Kunzi, on the other hand, was not thinking about joining the water polo squad when he arrived at GVSU.

“I initially wasn’t planning on it,” Kunzi said. “I was more focused on school. The club’s vice president contact me and told me we need a goalie. I told him I’d give it shot and ended up sticking with it.”

The freshman goalie is a Hudsonville, Michigan native, and squared off against Davis in high school water polo. Once foes, the two linked up to play water polo at the same university.

Kleinfeldt was another different story. The sophomore was originally from Chicago. Playing the role of the new out-of-state student at a university is not easy, but water polo gave Kleinfeldt an identity.

“Last year, I came in knowing nobody,” Kleinfeldt said. “Water polo practice was able to give me that consistency, which I really needed.”

Kleinfeldt not only had to adjust to a new state, but also a new culture of competition. He and Davis play the same position in the pool. A new coach at the helm helped Kleinfeldt compete at GVSU.

“Coming in to this year, I was kind of apprehensive because I kind of didn’t get a lot of playing time last year,” Kleinfeldt said. “Right away this year though, coach (Spencer) Sanders put a lot of faith in me and started me.”

Sanders, a former Michigan State water polo player, took over the GVSU water polo team this season after former coach Josh Ahrendt left. Sanders and the team overcame a number of obstacles during the year.

“At the beginning of the season we faced a lot of challenges,” Sanders said. “We fired up later than other programs. We were stuck in Hudsonville’s older pool that isn’t equipped to deal with water polo practices”

Despite the adversity, GVSU’s strong 2015-16 campaign fell short after losing to the University of Chicago, Illinois 7-6 in the conference championship match. With a win, the team would have advanced to the national tournament.