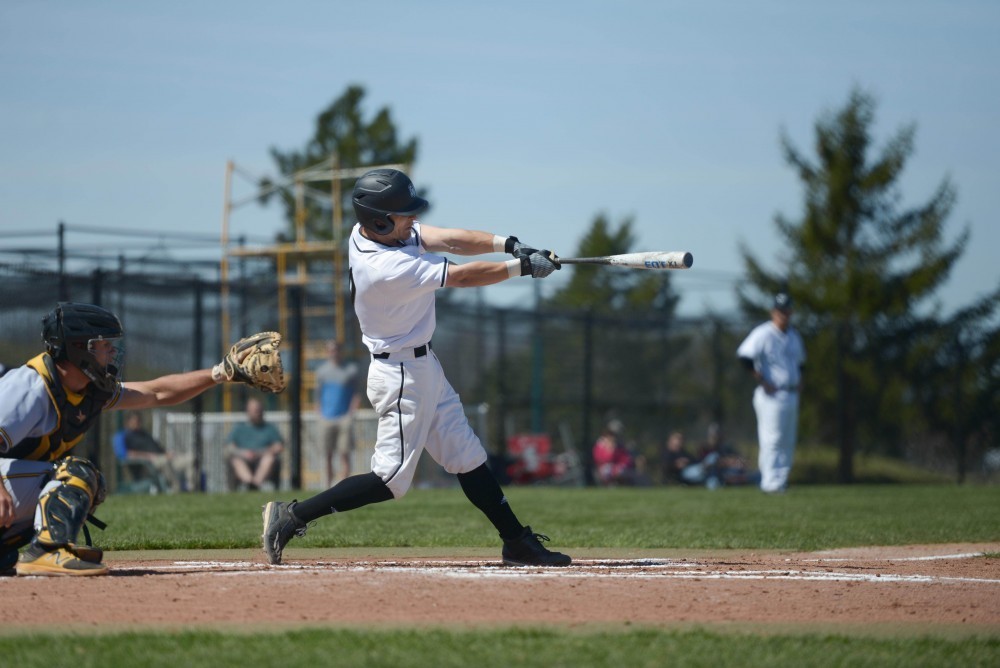 Whether it be injuries, inconsistent performance or just pure bad luck, Grand Valley State’s baseball team has experienced them all to a certain extent this season.

GVSU continued to fall in the standings as they faced Wayne State, Central Michigan and Saginaw Valley State in five games over the course of the past week. The Lakers split a doubleheader with No. 18 ranked Wayne State 7-4 and 8-9, before dropping a 6-2 decision at Central Michigan on Wednesday, March 27 and then dropped a twin bill against SVSU on Friday, March, 29.

“I refuse to believe this team is bad,” said GVSU head baseball coach Jamie Detillion. “It’s not an excuse, but we’ve played a lot of close games and good competition so it’s just a matter of us putting everything together out on the field.”

Of GVSU’s last four losses, three have been by only one run. GVSU has also faced opponents with a record over .500 in 18 of their 22 games so far this season.

GVSU has also experienced a lot of attrition in the middle of their lineup. Senior outfielder Zach Berry, who spent most of the year so far as GVSU’s second hitter in their lineup, recently underwent ulnar collateral ligament reconstruction – better known as “Tommy John surgery” – and will be out for the rest of the season.

Junior catcher Joe Laudont, who has hit in the three through five slots in GVSU’s lineup this year and owns the highest batting average on the team, was just reinserted into the lineup on Friday, March 29th. Laudont was listed as injured for two weeks with a strained hamstring after slipping on a mud patch in practice while trying to field a pop up.

“Two through six we’ve had a lot of shuffling this year, both with injuries and inconsistency,” Detillion said. “I’m not going to fall back on that as an excuse, but it’s one of the variables we have to deal with, and we should perform better once we get some consistency in the lineup.”

While there have been plenty of sore eye sights for GVSU so far this year, but there have also been moments where players and the team have shined, even if they have been few and far between.

Chase Carpenter has blossomed into a versatile two-way player. Carpenter is hitting .359 with nine extra base hits and a .594 slugging percentage while also appearing as a relief pitcher. On the mound, Carpenter features a low 90s fastball that he mixes with a traditional curveball. In three appearances over 2 1/3rd innings, Carpenter has only surrendered one hit while also striking out four batters.

“Chase has been one of our most steady performers this year,” Detillion said. “With Zach Berry out of the lineup the opportunity arose for him to get more time in the outfield and he’s made the most out of it so far this year.”

GVSU’s offense has also shown moments where they can be a tough team to record outs against. In their Sunday, March 24 double header against Wayne State, GVSU scored 10 runs in a two inning stretch from the end of game one to the beginning of game two.

“We’ve had flashes of potential, but potential doesn’t mean much unless you can consistently execute out on the field,” Detillion said.

Moving forward, Detillion said he wants to stress mental toughness and being prepared to compete from game-to-game and inning-to-inning on an every day basis.

“If I were to sum up our season so far I guess I would say it’s definitely a work in progress. We need to improve in a lot of areas, specifically with runners in scoring position and situational defense,” Detillion said. “But if we can hone our mentalities that is often what plays the biggest role in whether you win or lose, which team can be the most prepared and mentally tough is the team that comes out on top and that’s what we are looking to become.”

Up next for the Lakers they play another doubleheader at conference rival SVSU on Monday, April 1. Christian Mercure (1-3, 5.03 ERA) and Luke Hargis (1-0, 0.63 ERA) are slated to start the twin billing for GVSU.