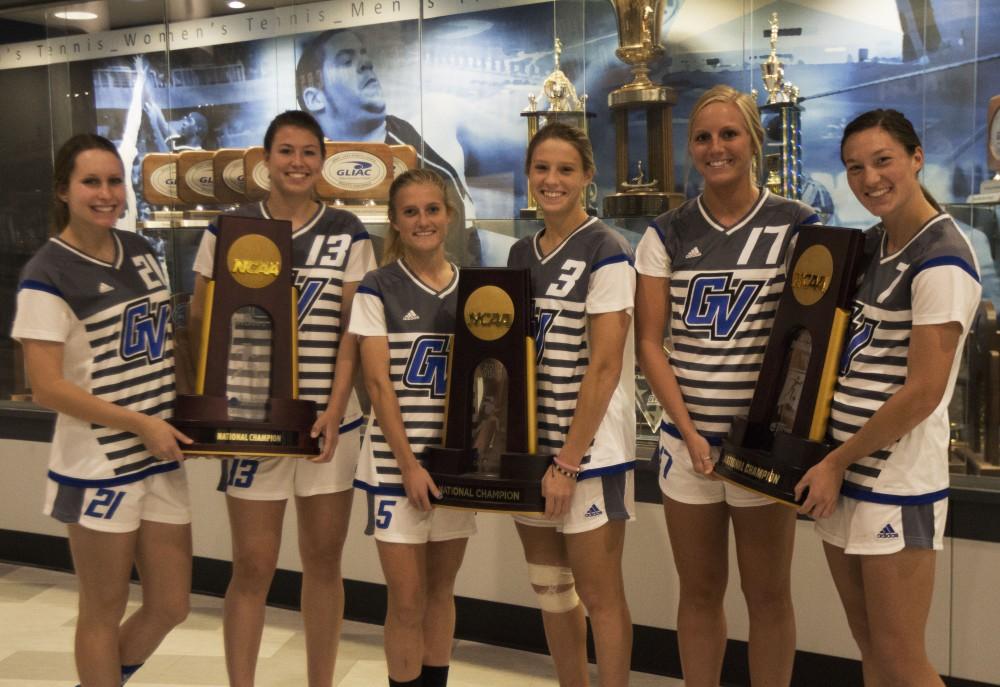 GVL/Mackenzie Bush - Seniors from the women's soccer team pose for a photo inside of the Fieldhouse Arena on Tuesday, Nov. 8, 2016.

When a collegiate program brings in a recruiting class, the hope is that one or two of the newcomers can contribute their freshman year, and that the rest will be in the lineup by the time they are upperclassmen. This holds true for most classes, but not the Grand Valley State women’s soccer team class of 2016. In the 2013 national championship run, the 2016 class played a vital role in the success of the team.

“It was a group that we knew were very competitive both on the field and in the classroom,” said David DiIanni, the former GVSU coach from 2003-14. “Even when we were recruiting them and they had made the commitment to the program, we knew that they could potentially do something very special.”

Now, three years later, the 2016 class has the opportunity to accomplish something that has only happened once in the history of NCAA Division II women’s soccer, and that is win four national championships in four years. The only other class to do it was the 1997 class at Franklin Pierce.

Over the past four seasons, this group has accumulated a trophy-case full of awards. The six seniors have a combined 10 All-GLIAC Team, six All-Midwest Team and four All-American Team honors.

Heading into their collegiate careers, the six freshmen were already familiar with one another before the first day of practice. Marti Corby and Clare Carlson played together at Forest Hills Central High School, and Gabbie Guibord and Alexis Mencotti have played together since they first strapped on shin guards in peewee soccer. The other two, Kendra Stauffer and Erika Bradfield, either played with or against the other four through club or high school soccer.

That familiarity between the six freshmen made it easy to mesh on the field as well as off the field.

“Right away we all became best friends,” Stauffer said.

“With some setbacks here and there,” Carlson said, jokingly.

The chemistry on and off the field translated into success for each of the freshmen and the GVSU soccer program. Before their arrival, the Lakers were perennial national championship contenders in the previous years with a surplus of talent on the roster, but even with the highly talented team, the freshmen fought their way into the lineup.

“At the time we were a very upperclassmen-laden team,” DiIanni said. “We had success for the last three and four years prior, and that speaks even more volumes to this class that they almost refused to not be on the field, but on same token, they didn’t do it brashly. They were completely bought into the team aspect.”

When the 2016 class entered the program, the Lakers said goodbye to a class that was much like the incoming freshmen. The class of 2012 included players such as Ashley Botts, Kayla Addison and Alyssa Mira, each of which made an immediate impact as a freshman.

“You just hear about those legends, and it’s like how can you even compare or compete with that,” Mencotti said.

“You are constantly striving to be like all of those legends,” Carlson said

“We have always had someone or some class to look up to,” Guibord said.

“(And we) still do,” Carlson said. “We still look up to all of those legends and alumni and their coaches.”

After their freshmen year, the GVSU program saw a coaching change with DiIanni taking a job as the head coach of the Iowa women’s soccer team. The new coach, Jeff Hosler, quickly became acclimated with the girls and continued the success of the program.

“Everything happened in such short order,” Hosler said. “I was hired the first July with just under six weeks to get ready and get to know the players. (DiIanni) and the girls had things rolling, so I think I’d be a fool to come in and try to make dramatic changes.”

With Hosler keeping the team’s style of play and principles intact, it was easy for the team to adjust to the coaching change.

“They have very similar coaching styles,” Bradfield said. “That helped us keep our groove going, and we didn’t have to change our formation.”

“Even through the coaching change, we were lucky to all be so close after freshman year,” Carlson said. “I think a lot of different program’s freshmen would go to different schools if they had a coaching change like that, but we all stuck through it and leaned on each other.”

“I was concerned about it, but knowing that everyone else was staying and on the same page it made that process so much easier,” Mencotti said.

“The success that they have had to this point is pretty remarkable,” Hosler said. “They have won every championship that they can up to this point. We know that there is more out there, but our focus has to be on this week.”

Although the team’s focus is on the first-round game, the idea of winning a fourth straight looms over the senior class.

“It’s on the table,” Guibord said. “A lot of people bring it up, but as our focus has been for the past three years, it’s a day-to-day thing. The only game that we are guaranteed is Sunday.”

GVSU will play the winner of the regional semifinal matchup between Missouri-St. Louis and Rockford Sunday, Nov. 13 at 1 p.m.