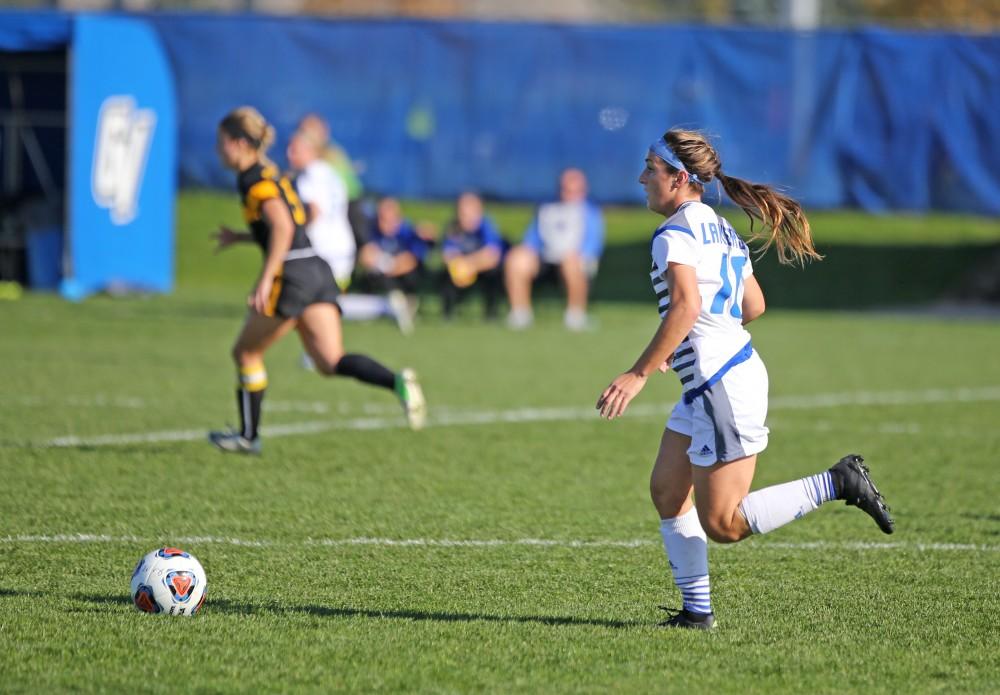 Last season, the Grand Valley State women’s soccer team’s season came to an end in the NCAA National Championship with a 3-2 loss to Western Washington. The Lakers ended their three-year winning streak and said goodbye to six pivotal seniors.

Once the season ended and old players moved on to new experiences, the Lakers were ready to bring in and showcase new talent in the form of 12 freshmen and two transfers. GVSU soccer now has the task of adapting as a younger team.

Jeff Hosler, who is returning for his fourth season as the women’s soccer team’s coach, thinks the chemistry among the team has been a positive so far.

“The freshman group is a cohesive group to begin with, and our returning players have done a really good job of connecting with them, teaching them what we’re trying to do on the field and getting to know them off the field in the terms of our expectations,” Hosler said.

The Lakers are preparing the fresh recruits through experiences, and one of them is just having a day-to-day mindset.

“With this group, we really talked a lot about the daily process and really trying to train with the growth mindset and approach everything understanding that we got to improve daily,” Hosler said. “Sometimes it’s going to (be) incremental; one of the fun things with a young team is you will find days or weeks where there’s tremendous growth.”

Even though this is just the beginning of their 2017 season, both freshmen and returning players feel close on and off the field. This is Hosler’s biggest signing class during his time as head coach with GVSU.

For midfielder Dani Johnson, this will be her senior year playing with the Lakers. She, along with the other upperclassmen, are playing a huge role in this season with helping the incoming freshmen.

The Lakers were able to meet their new players in a welcoming style. GVSU defender Makenna Schoolman, an incoming freshman, said the team feels more like a family.

“There’s definitely a lot of the team bonding and a lot of just becoming closer; it makes it easier out on the field,” Schoolman said. “It feels like a family instead of just stepping onto a new team, and you feel like we’re already close, so it’s not scary when you mess up because everyone has your back and everything.”

Hosler also believes the upperclassmen are doing a good job working with the incoming freshmen by getting them comfortable with the field and team. The juniors and seniors have been with the team long enough and have the experiences to know what it takes.

In fact, the transition to a younger team did not change the team’s mindset. They continue to train daily, sometimes even twice a day, but the Lakers stay focused on their improvements and take each day as it comes.

“We’ve always just focused on the details here, so details are extremely important to us, and the details help us get to the big picture that we want to be at,” Johnson said. “But we’re having fun. It’s kind of a new light, it’s a new energy, and that’s a big element of what we’re doing, too.”

The Lakers kick off their season with an away game against Columbus State Friday, Sept. 1.