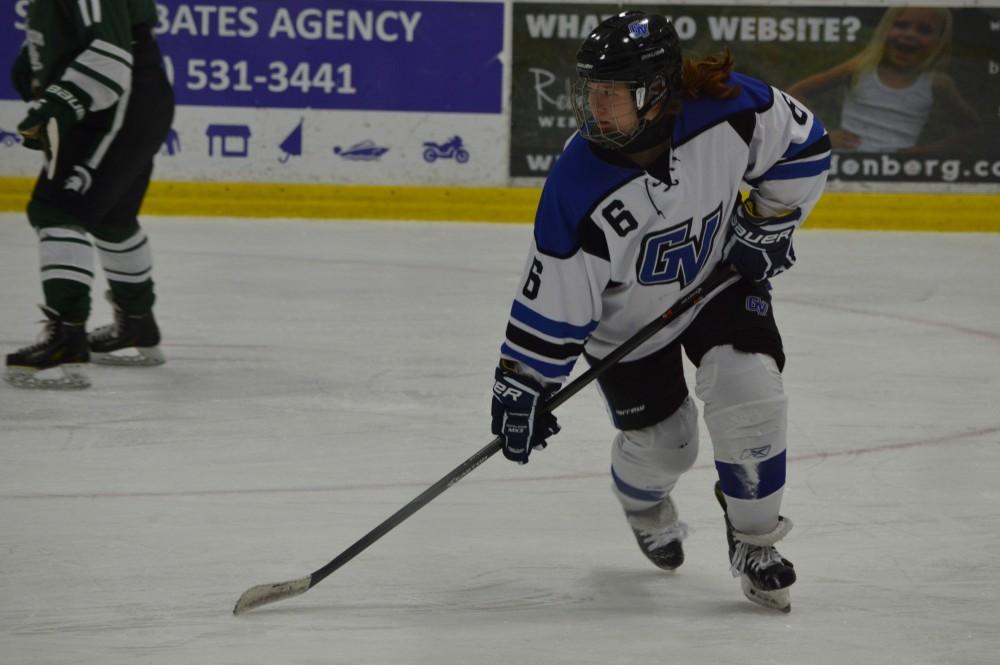 The Grand Valley State women’s ice hockey club team finished up the semester with a successful win against Aquinas College on Friday, Oct. 8, at the Georgetown Ice Center.

The Lakers had a slow start to the game but made sure to defensively protect their territory throughout the entire game. GVSU finished the game with a final score of 5-0, not allowing the Saints to make a single point.

GVSU head coach Sean McKernan is in his seventh season with the coaching staff and has taken over as a co-head coach for the women’s hockey program. He was able to share his thoughts on the women’s well-deserved win.

“To put 5 on the board definitely was a sign of relief for the girls to get the puck in the net, to gain some confidence that the hard work they’re putting in in the games, in the system they’re running, is efficient and creating scoring opportunities,” McKernan said.

Although the Lakers managed to score five goals yesterday, all 5 points were made in the second period. About seven minutes into the second quarter, GVSU outshot Aquinas 79-18, meaning the women went goal-less in the first and third periods. Coach McKernan believed the ladies could have continued to shoot with purpose and be on the lookout for open shots.

Speaking of finding an open person to create a goal, junior forward player Taylor Lampar was a key player for the Lakers in Friday’s game. She put two scores on the board, showing the girls her leadership skills.

“She’s a leader by example,” McKernan said. “She doesn’t really say a lot, but her plan is very noticeable. She takes and competes at a high level.”

The Lakers played a good game and were able to show much strength gained throughout the season that contributed to the successful win. Assistant captain Lampar believed GVSU played well but wanted to see a little more from her team.

“I think we had a lot of good puck movement, especially on our power place,” Lampar said. “We moved more without the puck, so that’s what created those opportunities for us, but overall I think it’s just knowing where each other is.”

Despite the 5-0 blowout, the Lakers had a few pointers they wanted to touch on before stepping out on the ice again.

“I think we could have done a lot better,” Lampar said. “We struggled playing downward competition, so we just got to keep up our intensity and how we know how to play.”

Going into next semester, the Lakers will still have more tough games ahead, but they plan to stay focused and make it all the way to the end.

“If we continue to build with our young forwards and gaining their confidence and continue to execute at a high level like we have, then the last three weekends of games that we play we should be fine,” McKernan said.

The Lakers have a few weeks off before heading to Illinois for a conference game at Robert Morris University on Friday, Jan. 12, through Saturday, Jan. 13.