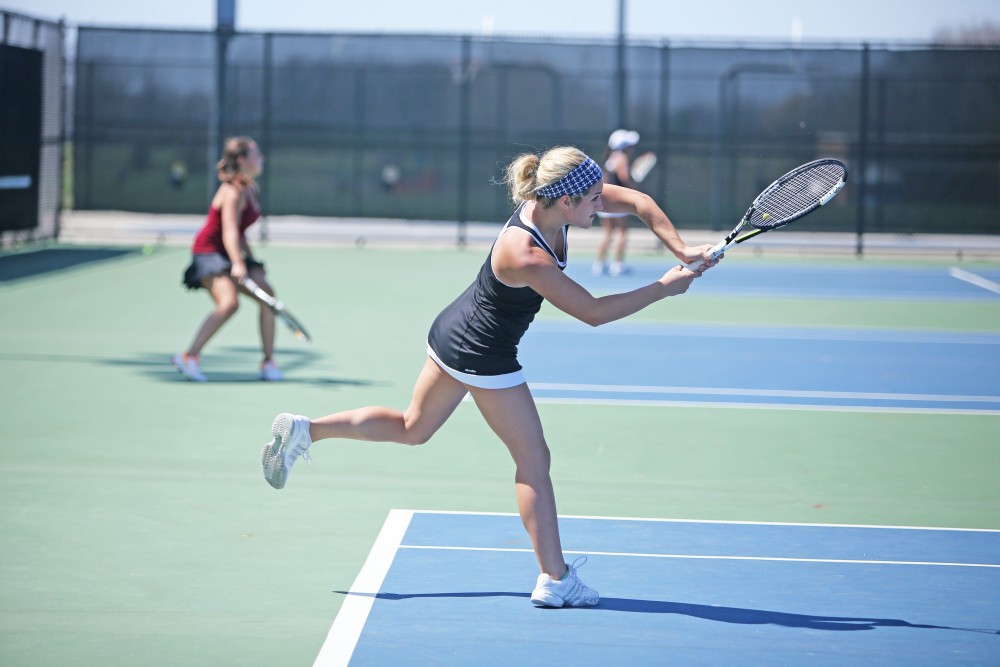 Just one week after hosting the 2017 ITA Regional Championship, the Grand Valley State women’s tennis team was back on the courts again for their first match of the season against Davenport University at home Saturday, Sept. 30.

GVSU had the tennis courts on fire, dominating in both singles and doubles matches. One can say it was an easy win for the Lakers, who ended the match with a 9-0 blowout.

Even though the match against the Panthers was a successful win, GVSU junior player Madison Ballard, who played in the singles and the doubles matches, took away more than just the thought of a win from Saturday’s match.

“I think our attitude really did well today,” Ballard said. “Something we’ve really been focusing on is our mental attitude and not being negative on the court. We all did really well with that today.”

Not only did the Lakers have a good mental attitude out on the tennis court, but they also communicated successfully.

“Communication (on the team) was really well,” Ballard said. “Nikki and I never have actually played doubles … at a match before, and we did really well today. We were able to communicate and stay positive and continue to take care of business.”

GVSU junior Livia Christman, who played in the doubles matches, also noticed the positive aspects of the Lakers’ play.

“I think some of our games lately we’ve had a little less confidence than usual,” Christman said. “And I think this will help us a lot, getting back onto where (we) usually are.”

The Lakers had a strong start of the season. They played aggressively, from being able to center up against the opponent to having secure serves to create wins. GVSU did not disappoint their staff, crew or fans, but instead they showed everyone what they are capable of.

Head coach John Black, who is in his 13th year as head coach of the men’s and women’s tennis teams here at GVSU, was pleased with his Lakers winning every singles and doubles match against Davenport.

“I felt we played solid in the doubles,” Black said. “Little bit of first-match jitters, but we really settle down and took it to them in the singles.”

Black noticed the team’s improvements out on the tennis courts in Saturday’s game. He said the Lakers have been working hard to where they are ready to play on the competitive courts.

“We have a lot of depth,” Black said. “We’re working hard. I think we’ve improved tremendously over the past few weeks, and we’re at the point where for us to step it up, we need competition, and with conference starting, we’re going to get a lot of competition coming up.”

The women’s tennis team has a busy season ahead of them.

“Everyone is going to be good that we play,” Black said. “We need to be ready. If we come out and play intense, (focused) tennis, I feel we can beat anyone in our conference.”