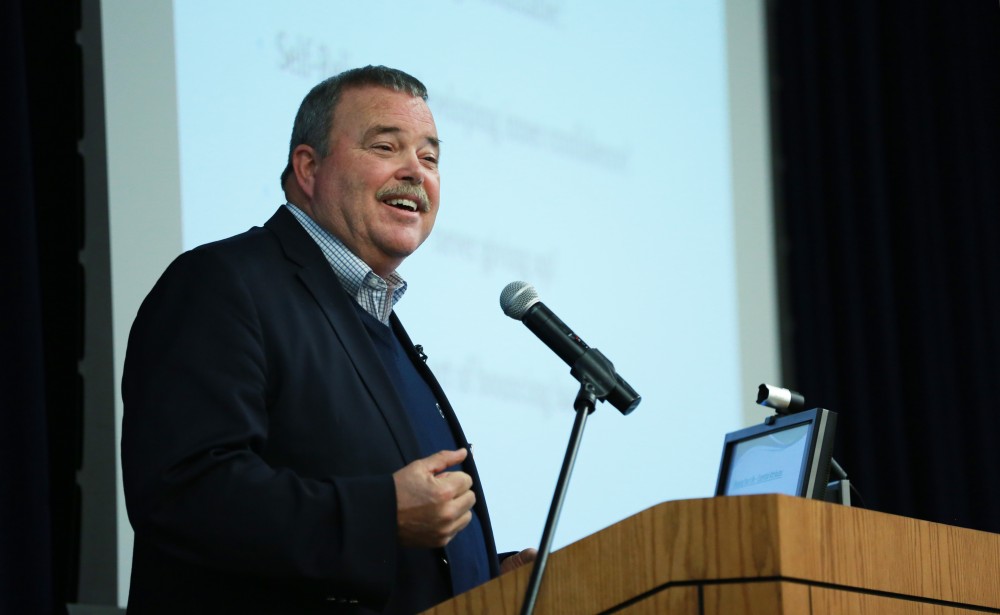 It’s rare for college students to take time out of their schedules to listen to a lecture unless it’s mandatory for a class, but Grand Valley State University’s Last Lecture is not your typical college lecture. Every year, students nominate a professor or faculty member at GVSU to give a lecture as if it was the last lecture they could give in their lifetime.

Based on a book of the same name by Jeffrey Zaslow and Randy Pausch, the lecture series has been a tradition at GVSU since 2010.

“I think (Last Lecture) holds a lot of amazing opportunities for there to be really inspiring and influential perspective given to inspire students to fulfill their dreams, to go forward with what they want to do with their life, to be a better person,” said Malayna Hasmanis, vice president for educational affairs on student senate.

Hasmanis said Last Lecture has become a campus tradition to honor a professor or faculty member.

“Oftentimes, it’s kind of them reflecting on their journey in life and things they’ve learned the hard way, to give us perspective on things they would have done differently (and) to inspire us to be a better version of ourselves,” Hasmanis said.

While Last Lecture offers additional advice to students, Hasmanis said the campus tradition is also a benefit for the professors that are nominated by their students. While only one professor can be chosen to deliver the Last Lecture, she emails each nominated person some of the reasons the students gave for nominating them.

“I think it’s overlooked, a lot of the hard work professors put in to make sure we get the best education,” Hasmanis said. “I think it’s really awesome we have such a strong community base with our professors where we’re willing to respect what they’re saying and really take that in.”

Former dean of students and current GVSU professor Bart Merkle spoke at Last Lecture last year about “shaping your destiny.” Merkle said he believes everyone is in control of their own destiny in some way. He shared some of what he said are his “guiding principles in life,” that family comes first, to treat others kindly and with respect, and “we’re all a part of something bigger.”

“I’m a strong believer that everybody has potential,” Merkle said. “The challenge for us is to figure out what our potential is, and find our interests and our passions to shape our life around trying to find that potential.”

Merkle said he spent a lot of time reflecting on his own life in preparation for his lecture, and organizing what he felt was important enough to share with students. He said he has never spoken so personally about himself in a public way before.

The chosen professor will be announced Thursday, Oct. 20 after the student senate general assembly meeting, and the lecture itself will be held Thursday, Nov. 17. The lecture usually brings around 75 students and Hasmanis said hundreds of students participate in the voting process.

“I think it’s a really great way to gain insight on how we should view things in a larger way with our journey in life,” Hasmanis said. “I’m really hopeful that people come out and give it a chance to support it.”