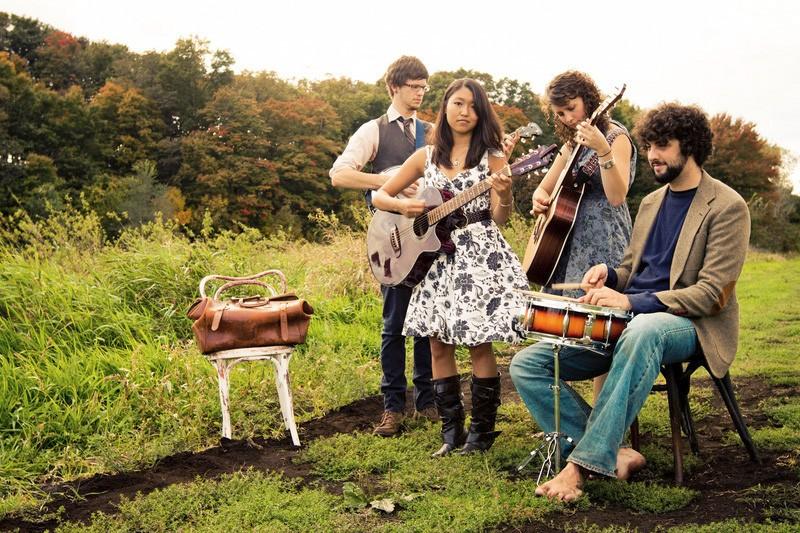 The Crane Wives are not actually birds.

What are Crane Wives? Those who know music might recognize the words as the title of indie band the Decemberist’s 2006 record. Others might suppose it to be what you might call female cranes that have been married in a matrimony recognized by the state of Michigan or as the ancient Japanese fable from which the name originates. This though may be rare. Nevertheless, what it is certain is that the Crane Wives are a freshly wed (forgive the pun) band from Grand Rapids outfitted with some of Grand Valley State University’s multi-talented artists.

With sharpie-emblazoned demo in tow, the Crane Wives recently played the Viceroy in downtown Grand Rapids. Tucked neatly in the corner, the band played for almost two hours as a dwindling, uninterested crowd turned into a respectable mix of curious boozehounds and loyal friends who sang along to the twangy and folk-infused covers of Amy Winehouse’s “Rehab” and the Red Hot Chili Pepper’s “Otherside”

A few years back, Tom Gunnels, who played primarily only guitar then, met drummer Dan Rickabus as freshman at GVSU. They jammed together as two-piece outfit for a while but eventually fizzled out.

It was only about six months ago when Gunnels said he had been playing with guitarist and GVSU student Kate Pillsbury. Eventually the three came together and were later joined by mutual friend and guitarist Emilee Petersmark rounding out the quartet.

“It was sort of a natural coming together,” Rickabus said. “We all sort of new each other to begin with, so forming a band was basically the next step.”

Rickabus and Gunnels agree that what drew them to the idea of Crane Wives was hearing the vocal harmonies that Pillsbury and Petersmark create.

“The girls are a real center point to band,” Gunnels said. “They sound so good together and it’s great to have such strong vocals in the music.”

“My grandmother actually told me she though they sound like angels,” he said.

The band is a kind of neo-folk group with rumbling drums rhythms, dual acoustic guitars and the distinct sound of banjo tiptoeing the old country fence. While they have a stable of well-adjusted covers the band has begun building a catalog of originals and are anxious to start recording more extensively.

Starting Sunday, the band will head into Sound Post Studio’s to begin work on their debut LP from scratch.

“We’ve dumped out the box of Legos,” Rickabus said. “Now we’ve got to try and build something from there.”

The attitude of the band is exceptionally driven, especially when looking to be booked in and around the West Michigan area. They’ve played numerous venues and are slated to play again at the Viceroy on the Nov. 18.

So far the effort to get their name and music out to the public ear has been rather marginal, but expected. As users of social media, the Crane Wives are none too shy with band profiles from Facebook to Reverb Nation.

“Right now we just want to keep playing shows and writing new songs,” Gunnels said. “We’re all really excited about where the band is going.”