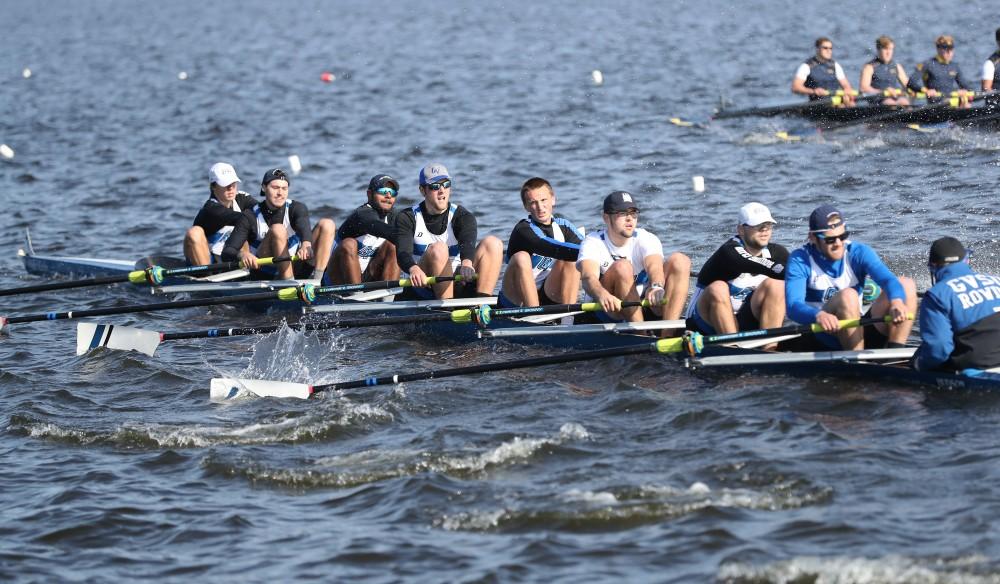 After a long winter and multiple out-of-state competitions, Grand Valley State rowing has finally been able to compete on its own home turf—or waters—this spring.

The Lakers combined team score of 35 was enough to tie with Michigan for second best overall in the field of 10 teams. The men’s team came in fourth with 18 points and the women’s also finished fourth with 17 points.

The three day event was cut one day short Sunday, April 9, due to 20 mph winds creating tides that were too high for competition. Although conditions were rough, the Lakers are accustomed and trained to handle the tough winds.

“You might get some extra water in the boat and feel extra resistance from the wind, but the wind can be compensated for through rigging,” said senior Christopher Doherty. “One of the strengths of this crew is our form. We row well in any condition. We consider ourselves technicians, students of the sport if you will. This allows us to not really be affected by bad weather. Sometimes it’s even advantageous for us.

“If anything, it makes racing more fun and interesting.”

The Lakers faced off against tough Big Ten schools, but Doherty believes his team was well prepared for the competition.

“As far as racing against division one schools, it’s nothing new for us,” Doherty said. “I think we were one of the only non-Big Ten schools in our event. It’s really incredible to be able to come to GV and row at such a high level.

“There is nothing like lining up against big name universities and being able to compete with the best of them.”

Although GVSU didn’t win any of the 11 men’s and women’s competitions, coach John Bancheri couldn’t be disappointed with either of his team’s performances.

“We’re facing schools that have a lot more depth and horsepower, but when our eight best face anybody else’s eight best, it’s going to be a damn good race,” Bancheri said. “It was really fun hearing some members of the big schools ask, ‘Who’s that Grand Valley school’? I think we put ourselves on the map.”

“The men’s varsity boat had a solid weekend, and the other men’s boats did as well,” Doherty said. “It’s important to remember that the success of the top boat is largely due to inter-squad competition and being pushed by everyone else on the team. That competitive spirit was in full force this weekend.”

The planning for this year’s Lubbers Cup started in early September. One of the new installments was a live stream conducted by WKTV on YouTube. Doherty believes that exposure was great for competition and promotion of the sport.

“It’s really cool to be able to bring this level of rowing to the area,” Doherty said. “It’s a mix of nervous, excited, but above all else adrenaline. Racing is why we are here, in the Midwest there are very few regattas like this.”

GVSU rowing will have a month-long hiatus as they prepare for the 52nd Annual Mid-American Collegiate Rowing Association Championships in Philadelphia, Pennsylvania Saturday, May 6.