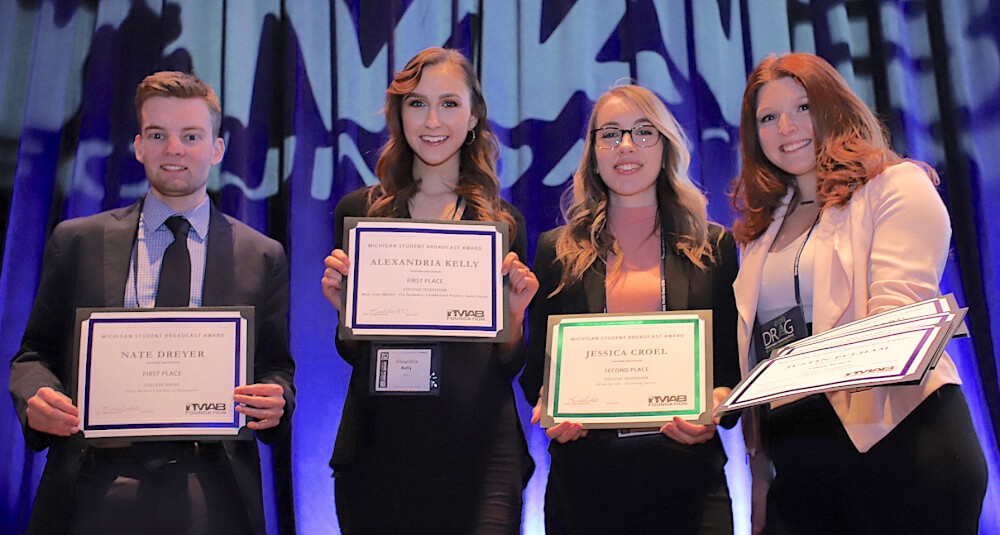 After hours of hard work both behind and in front of the camera, a handful of Grand Valley State University Multimedia Journalism students were recognized at the Great Lakes Media Conference. The conference was hosted by the Michigan Association of Broadcasters and took place on March 5 and 6.

For the second year in a row, GVSU’s West Side Stories television program took first place in the Daily Newscast category of the Michigan Association of Broadcasters’ Student Awards. West Side Stories is a student-run program that focuses on interesting stories about people and places in west Michigan. The program started in 2017, and has since received early and consistent success.

After being nominated by Professor of Multimedia Journalism James Ford, GVSU junior McKenzie Sorrell won the $1,000 Jerry P. Colvin Scholarship for her work with West Side Stories.

Sorrell wasn’t aware that she was nominated for the scholarship until after she won it. She said she felt honored just to be nominated, let alone to win it. The award confirmed to her that her hard work is paying off and that she’s heading in the right direction.

“All of these stories that I do for West Side Stories – I do them because I want to share part of the world that some people may not know about,” Sorrell said. “I take pride in the work that I do and sharing experiences and peoples’ stories that people wouldn’t know unless I shared them.”

Sorrell didn’t become a multimedia journalism student until the beginning of her junior year, meaning she’s new to the program. She thanks her passion, dedication and hard work for her early success.

“I think that sometimes people can be scared or intimidated trying something new, but I think if you’re passionate about something, everyone should take a leap of faith and go for it because you never know what could happen,” Sorrell said. “I won a scholarship within a semester of being in the program, so I think it’s important to just take the leap and trust your gut.”

Dreyer had an early interest in sports broadcasting and it has always been a focus for him.

“You can probably go back to me calling backyard baseball games when I was eight, nine or 10 years old,” Dreyer said. “I’ve just always, for some reason, had an interest in broadcasting, sports broadcasting and auto racing. I don’t know what it is, it has just always been something there for me that I wanted to do.”

He said that awards like this show him that he’s on the right track, but he doesn’t let the success get him too high, as everyone has a different opinion of what they want in a sports caster.

Dreyer currently works almost exclusively for third parties and hired jobs. He does work for high school football and basketball and Aquinas College along with his work at GVSU.

“I’m happy to continue the success that GVSU has had in this award and in this field over the last couple of years,” Dreyer said. “Hopefully whoever comes after me can pick that back up and GVSU can keep that momentum going because we’re starting to build a name, I think, among other people in sports casting.”