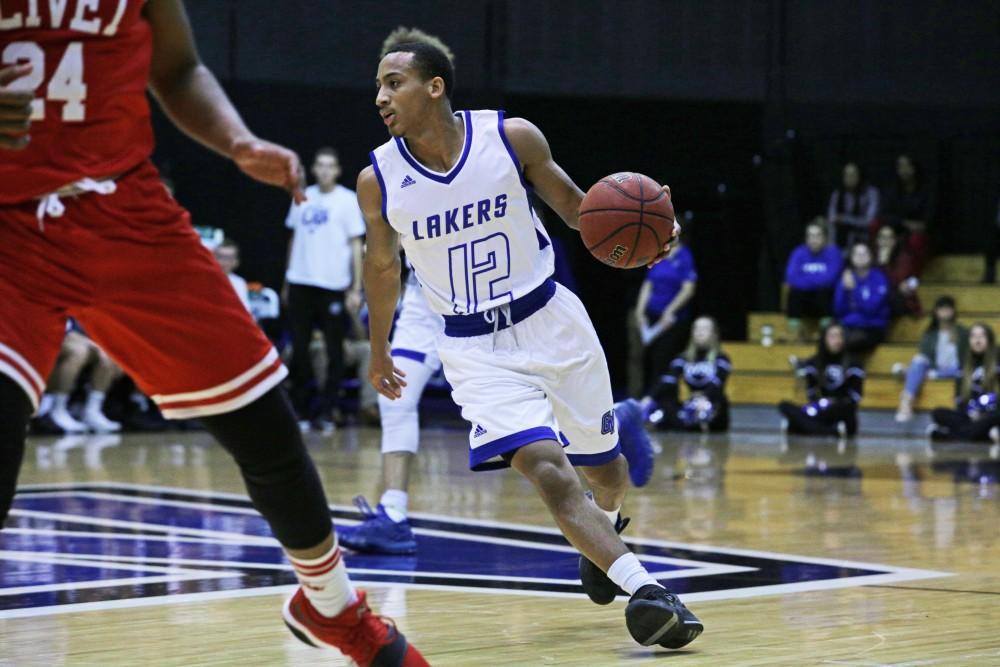 This will be quite the senior year for Grand Valley State men’s basketball guard Myles Miller as he prepares to end his final season with the Lakers in a memorable style.

Miller’s time here as a Laker started a bit differently than one would expect. His recruiting process was unique in many ways, starting with his first visit to GVSU.

“It wasn’t a regular overnight visit where the recruit meets the campus,” Miller said. “Mine was a workout and the opportunity to play open gym with the team.”

One would think a team captain who averaged 16 points, four assists and nearly two steals per game during his senior year coming out of Ottawa Hills High School would have offers thrown at him.

But not in this case, as Miller wasn’t given any offers to play after his senior year came to a close. However, he didn’t look at the lack of offers as a setback. Instead, Miller was determined to prove his position on a college team. With his strong will and drive, Miller transitioned into a Laker just one week after visiting.

“I actually reached out to a few schools, GV being one them, expressing my interest to be a part of the program,” Miller said. “GV responded back and let me come up for a visit, and after that, I was able to earn an offer. And I actually picked up a few other offers from different schools, but I ultimately chose to be a Laker.”

Miller has since become a strong leader for his team through his moments at GVSU. This season, he is keying in on assists and looking to get other players shots. Currently averaging around five assists a game, Miller is able to provide guidance, support and, most importantly, proof that size doesn’t matter in basketball.

“The fact that I was able to achieve my dream to play basketball at the collegiate level at my size is a real testament to the amount (of) hard work and dedication that I put towards becoming a better player,” he said.

Miller continues to share the importance of optimism and how beneficial a good mindset can be.

“It truly goes to show that if you believe in yourself and your ability, you can achieve just about anything,” Miller said. “Growing up, I had always had a mindset of ‘You never know what you can do until you try,’ so I gave it my all and here I am today, playing basketball at a collegiate level.”

Having the opportunity to spend all four years of his college career on a team that opened up more doors than he could ever imagine created a special spot in Miller’s heart for the Laker basketball program.

“As far as my time with inside the Laker program, I’ve made some very viable connections,” Miller said. “I have some lifelong friends from playing basketball here. It’s really everybody, all those guys. I have relationships that will be there forever and even with my coaches as well.”

This may be his final year as a basketball player at GVSU, but Miller will remain a Laker for lifetime. After graduating, he plans to take on a full-time position offered from Northwestern Mutual, creating opportunities to check in on his fellow teammates.

“I feel like that’s Laker tradition,” Miller said. “I think I’ll definitely come back and see some of my younger guys, see what they blossom into. I’m actually quite excited for that.”

Miller and the rest of GVSU men’s basketball team (2-1overall) will continue the successful start to the season against the Grace Bible Tigers on Thursday, Nov. 16, at the GVSU Fieldhouse Arena.