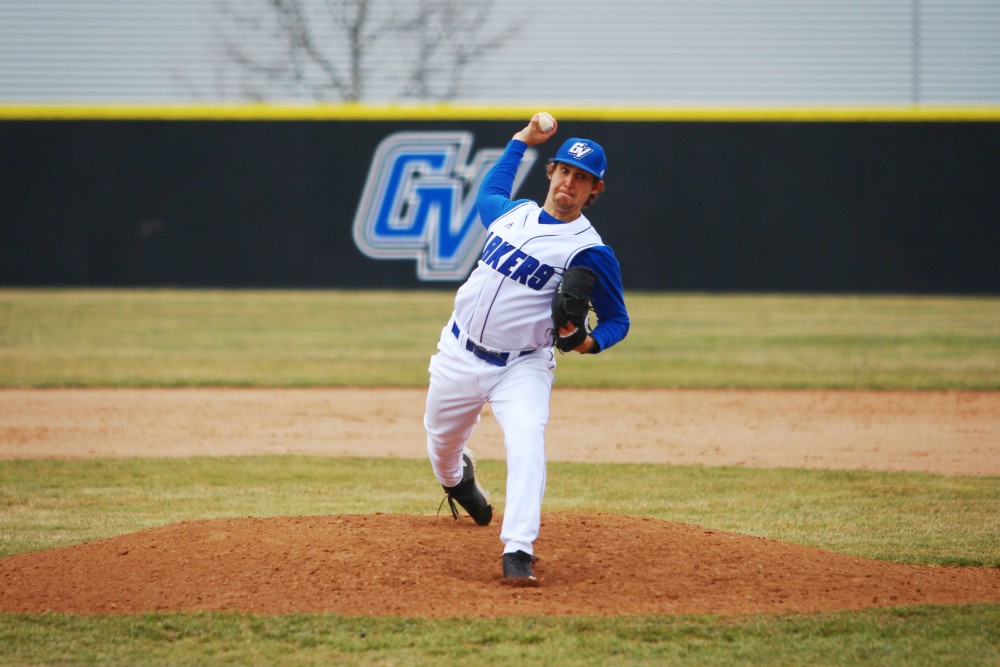 If you go back to Sunday, March 24, Grand Valley State baseball had just come off a 7-4 win against a nationally-ranked Wayne State Warriors squad and moved within two games of .500.

In baseball where a little momentum can go a long way, GVSU hoped that they had found that source of momentum against the Warriors. What they actually found was much less than what they were hoping for.

After dropping a trio of games against Davenport on Friday, April 5 and Saturday, April 6, GVSU is now 0-9-1 in their last 10 games since that win against Wayne State. There has not been one glaring weakness that has led to this abysmal run, but rather a combination of different factors.

At times, there have been injuries. Left fielder Zach Berry and first baseman Ryan Blake-Jones, two main cogs in the middle of GVSU’s lineup, are out for the rest of the season. Starting catcher Joe Laudont had missed multiple weeks with a strained hamstring but is back in action after a bit of misfortune.

“It was kind of a fluke accident slipping on the mud at Wayne,” Laudont said. “I was ranging to my right to field a pop up and I hit a slippery patch and tweaked my leg a bit, so I definitely wish I could have that moment back.”

At times, there has been poor execution on the mound. GVSU’s pitching staff has shown the inability to keep pitches out from over the middle of the plate, epitomized by the 13-8 loss against Davenport Friday where the Panthers connected on five home runs.

At times, there has been a lack of focus on defense. In game two of their Saturday, April 6 doubleheader against Davenport, second baseman Anthony Cocco lost possession of the baseball with the bases loaded in the top of the seventh inning trying to transition a grounder to second base for what could have been an inning ending double play.

Instead of an inning ending double play, an unearned run came across home plate and Davenport’s Travis Harvey cleared the left field fence for a grand slam on the very next pitch.

“We gotta execute on the mound and make pitches, then play defense behind our pitchers when the ball’s put in play,” Cocco said. “We’ve struggled at times with that stuff, but if we go out there and execute the way we know we can we should be able to start winning ball games again.”

Moments like all of these are what have characterized GVSU’s season so far, leaving most at a loss for words as to how they can overcome their struggles.

“There has been a lot of key players in and out and with that has put a lot of guys in positions they are unfamiliar with,” said GVSU head coach Jamie Detillion. “It’s a tough situation and guys have had some hard emotions dealing with this but I still think we have can overcome this, it’s just a matter of us finding our groove.”

Despite their record, there have been a handful of bright spots for the team, even if they are few and far between these days. In Berry’s absence, Chase Carpenter has taken over left field and turned out to be one of GVSU’s most reliable hitters. Carpenter currently owns a .314 batting average with 10 extra base hits in 86 at-bats so far this season.

When healthy, Laudont has performed well behind the plate and hitting at it. Through 22 games played, Laudont has one error and leads the team in batting average at .333.

Freshman starting pitcher Rylan Peets has emerged as one of GVSU’s go to starters, posting a 2.70 ERA in five starts and one relief appearance despite his 2-3 record.

“Rylan has been doing a really good job of locating his pitches and keeping the ball low lately,” Detillion said.

“He has a very repeatable delivery and he got into a groove that allowed him to consistently place pitches low in the strike zone.”

Moving forward, Detillion said he hopes that his club can play with some mental toughness and that could help them get past the funk they are in.

“Having some mentally tough kids who can overcome a few mistakes would do us a world of good right now,” Detillion said. “I keep telling the guys all it takes is one game to get things turned around in the game of baseball, anybody can get hot on any given day and turn things around any given day, but we just have to get there first.”

GVSU baseball looks to get back on track this weekend, as they’ll face Wisconsin Parkside in three weekend matches. The Friday, April 12 game starts at 3 p.m., Saturday’s game starts at 1 p.m. and Sunday’s starts at noon.