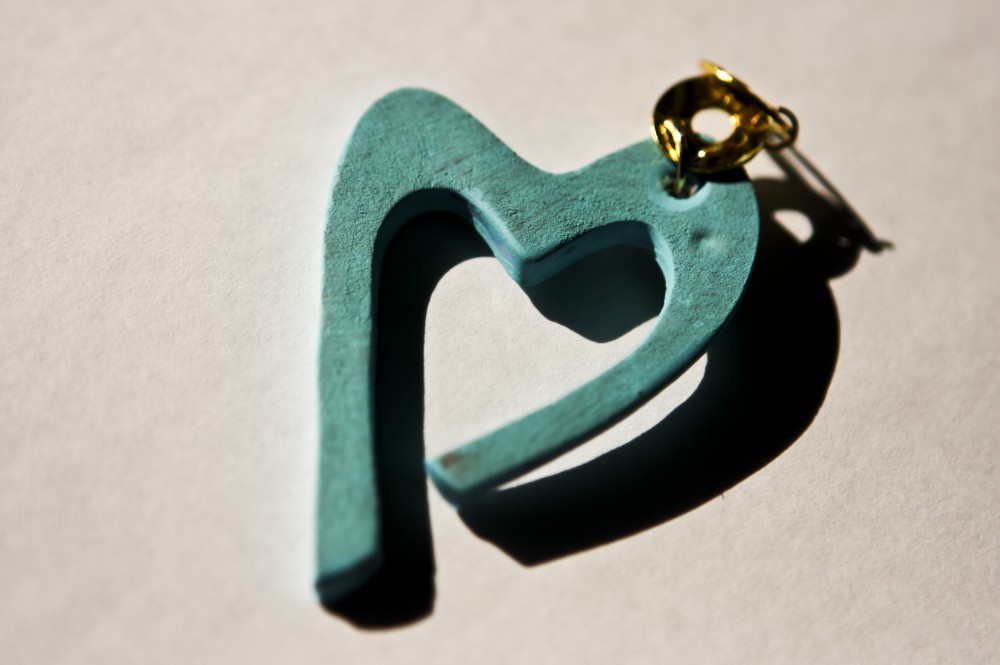 Those attending FocuZ 2010 each recieved a blue heart. According to the Blue Heart Campaign Web site: "The Blue Heart represents the sadness of those who are trafficked while reminding us of the cold-heartedness of those who buy and sell fellow human beings. The use of the blue U.N. color also demonstrates the commitment of the United Nations to combating this crime agaisnt human dignity.

On what Theresa Flores describes as “the darkest day” of her life, in a scummy motel room in inner city Detroit, two dozen members of a crime ring bid for her favors and sexually abused her.

“Here is your reward, gentlemen, for a job well done in our organization,” the ringleader said.

Again and again Flores was auctioned to the highest bidder until she passed out – beaten, bruised and bloodied.

Now, 20 years later, Flores has written a memoir, The Slave Across the Street, about her experiences.

She gave the keynote address and spoke on a panel at Grand Rapids’ FocuZ 2010, a discussion on human trafficking held in the Loosemore Auditorium of the DeVos Center on GVSU’s Pew Campus Friday evening.

Flores said while she has an occupation unique from other women, she has an important role to play.

“We can save other girls from having to go through what I did,” she said. “People say ‘I didn’t know.’ Well, I didn’t know, either.”

Flores came from a middle-class Irish Catholic family, and because of her father’s work situation, the family moved about every two years. Changing schools did not upset Flores until high school, when the other students had firmly established their cliques.

When a young man a few years older than her singled her out, she appreciated the attention. He pursued her for six months, and when he asked to give her a ride home, she agreed despite objections from friends and family.

Instead of taking her home, he drove the opposite direction and pulled the car into the driveway of a fancy house. At this point, even Flores needed a bit of convincing.

So Flores went with the young man into the house, where he drugged and raped her.

He took pictures of the incident to use as blackmail for her to perform later favors. He threatened to show the pictures to Flores’ father, other students or their priest. Flores was effectively trapped into sex trafficking.

“I always had hope that I would get the pictures back, and I never did,” she said.

In fact, no one reached out to help Flores until the morning after the worst night of her life – the night in the motel far from her home. When she finally woke up, the men had left. But Flores worried they would return, so she hurried to the closest populated area – a 24-hour diner next to the L-shaped motel.

Her savior arrived in the form of a waitress, who sensed something out of place.

The waitress asked, “Can I help you?”

Similar to many victims of sexual abuse, Flores denied anything was wrong and refused help, but the waitress called the police anyway. They knew the men who had committed the crime and wanted Flores’ help to catch them.

One night after she returned home, Flores heard gunshots fired outside of her home. She knew the men in the crime ring were giving her a warning not to cooperate with the police.

A panal discussion followed Flores’ speech. Panel members stressed that human trafficking does not only occur overseas, but also in the United States – even in Grand Rapids.

Panelist and U.S. resident Malynda Jones was sold into sex trafficking by her mother, who needed money to provide for the rest of the family.

Panel members also urged audience members to take action by educating others on trafficking or joining a local organization to help combat the growing problem.

“Go from a bystander to being an ally,” said panelist Rebecca McDonald.

McDonald saw the repercussions of rape in a childhood playmate. After the friend’s rape, the perpetrators poured acid down the victim’s throat, making a statement that she should be silent about what had happened to her.

After the incident, McDonald decided to devote her life to activism for women’s issues, including sex trafficking. She is now president of Women at Risk International of Rockford, an organization that gives voice to abused women.

“Go home and tell two people what you’ve heard,” Flores said. “That’s how we start to attack this – by raising awareness and education.