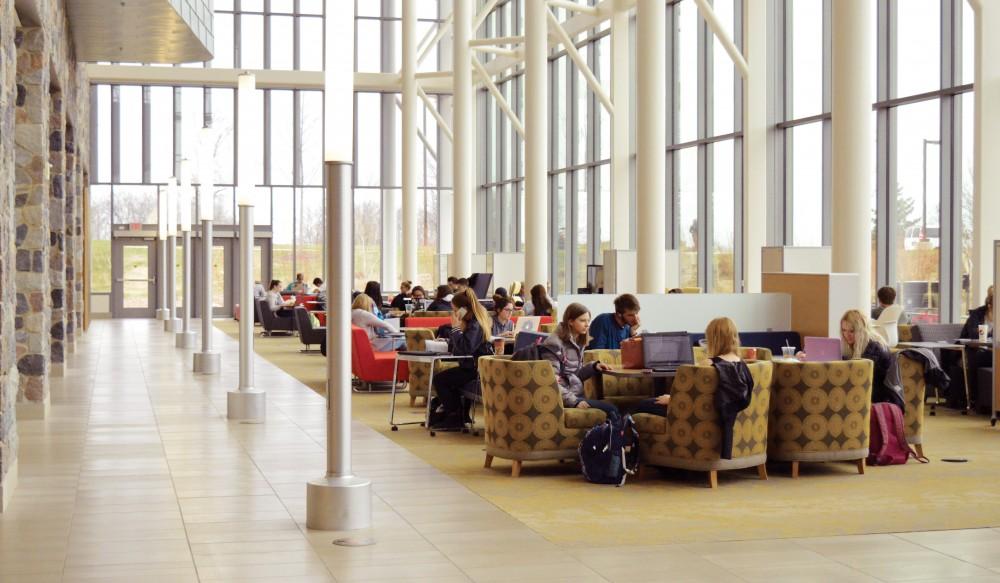 Grand Valley State University’s library is in the preliminary process of cutting over $800,000 for its collections budget to combat the rising prices of subscription-based services and an absence of bonus funds from the Provost’s office. In a January 2019 memo from University Libraries, the process will include the collection of feedback from students and faculty to ultimately make cancellations to journals and databases by January 2020.

Associate Dean of Curation, Publishing and Preservation Services Jeffery Daniels said that out of the library’s approximate budget of $12 million, there is little wiggle room in finding ways to cut costs. Nearly $6 million of those funds supports faculty and staff and approximately $5.2 million is set aside for collections, with the remaining funds being used for library upkeep and support, such as furniture and technology maintenance.

Of that collections fund, 90 percent of it is allocated toward subscription-based services, which have caused budgeting stress due to annual inflation. According to the January memo, the mean price of an Ebsco title has increased 5.6 percent on average over the past four years.

“The Provost’s office has protected us as much as they possibly can, but when they are being asked to trim a significant amount of money, all of their units are asked to trim as well,” Daniels said. “So even when we have a flat budget — which they were able to accomplish for us for a very long time — because of these inflationary increase, if the Provost came to us tomorrow and said, ‘You can have the exact same budget as you had last year,’ we’d still need to cut.”

University Libraries leadership is negotiating with companies, setting a firm line to not sign with companies that inflated prices over five percent, Daniels said. Thought cuts of all kind, as cancellations become effective in January 2020, Daniels said that visible decisions will be made.

“Our students will notice – I’m not going to sugarcoat it,” Daniels said. “You will say, ‘Hey, I used that journal on a paper last year and now we don’t have it anymore.’ That’s going to happen, but I think we’re going to minimize that.”

This will affect students both in independent research and classwork, but library liaisons are working with their departments to proactively rework curriculums to minimize friction. Efforts to make up for lost resources could include using other journals or looking into growing open access resources.

Further conversations between University Libraries and academic departments primarily consists of a survey sent to faculty members asking them to note which resources their department uses most, both for classes and faculty research. These preliminary surveys will help form recommendations for a cancellation list that will be discussed in March.

History professor Scott Stabler said that the library’s budget cuts were recently seen through those surveys. While the department is giving University Libraries feedback on their use of those resources, Stabler said him and his colleagues are fearful that the upcoming retirement of vital library liaison Bob Schoofs could result in the position not being filled next year, affecting a key student resource.

“(Bob) is very good at what he does,” Stabler said. “He’ll come to classes, he’ll introduce the library to students, he’ll show them databases, he’ll meet one-on-one with them. He is very well-liked among our department.”

While Daniels said that plans are still subject to change, his goal would be to keep all of University Libraries’ team in place. This includes maintaining Schoofs’ position among others.

“I wouldn’t say anything is off the table,” Daniels said. “What I am comfortable saying is at this time, to my knowledge, we are not intending to reallocate any of our faculty lines, and our library liaisons are faculty. We do realize the importance of those positions in supporting the teaching mission of the university and we hope to continue to fund those fully.”

Stabler said that the library cuts are representative of budget tightening around the university. With conversations still to be had, Stabler said that research funds, potential raises and the prioritization of hiring non-tenured faculty could be potential repercussions as this progresses.

“It doesn’t seem to matter how the economy is doing,” Stabler said. “It’s always seems we (GVSU) don’t have enough money. And of course, they’re putting up buildings all over the place, so I think faculty and staff start to wonder how resources are being allocated.”

As the library works through the feedback and budget tightening process, Stabler said that he understands their situation, but issues in funding allocation and revenue generation will be on the forefront of many departments for the next few years.

“The library is in a tough spot and they have to do some cutting,” Stabler said. “But so does almost everyone.”