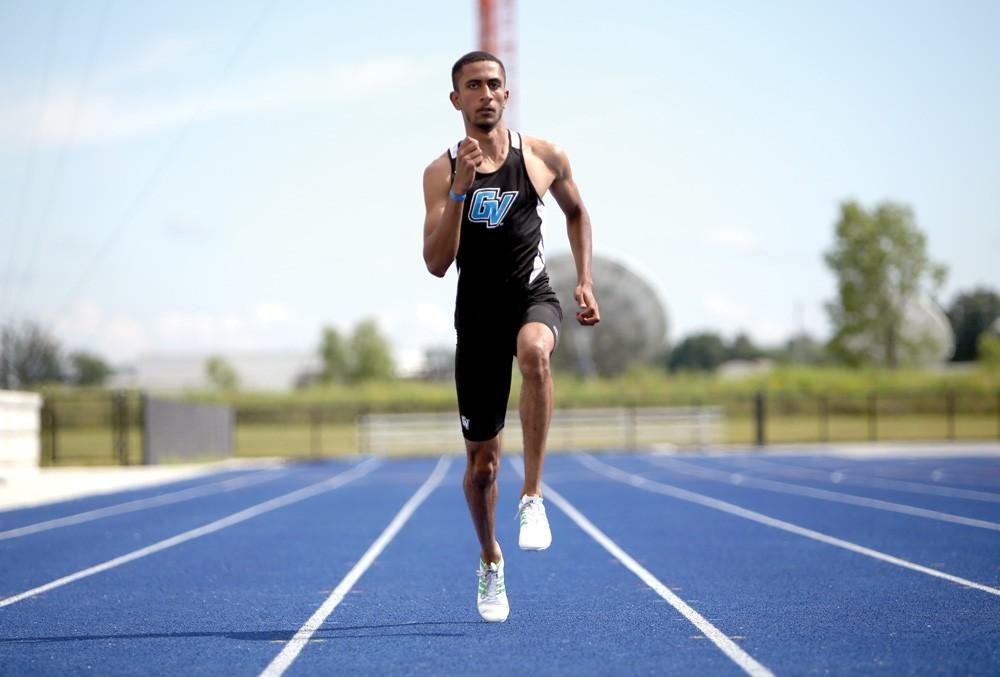 GVL / Robert Mathews The observance of Ramadan poses challenges to Muslim athletes all arossed the world. GVSU cross country and track star Mohammad Mohammad understands welcomes these obstacles during his off season training.

When it comes to religious fasting, the coaches and trainers at Grand Valley State University said it’s never posed a problem.

That may be true for the prolific athletic program in general, but fasting has surely caused its fair share of hardship for the athletes who endure it. “We haven’t encountered many issues with this, but it certainly is an important one for the individual,” GVSU Athletic Director Tim Selgo said.

Mohamed Mohamed participates in the Islamic holy month of Ramadan, which requires rigorous daytime abstinence from food and drink, including water. As a runner on GVSU’s track team,
Mohamed finds the fasting ritual a little problematic during training, but he weathers through it.

“My faith is the most important aspect of my life,” Mohamed said. “It is a must to fast and engage in the holy month of Ramadan no matter what hardship is in front of you such as track or cross country for me. The only time I will not engage in fasting is if sickness doesn’t allow me to.”

Mohamed said he continues to train during the holy month and has been doing so since high school.
“I learned new ways to train better every year,” he said.

Now, with years of practice behind him, Mohamed understands the most effective ways to remain healthy and prevent fatigue while running on low fuel.

“The key during the month is not to overtrain,” he said. “In high school, I would run hard and break my body down. The biggest factor in training and staying healthy is managing when I am going to train and manage my meals during the nights of Ramadan. I learned more and more as I got more experience and speaking to professional Muslim runners about running during the month of Ramadan.”

Mark Stoessner, GVSU head athletic trainer, said he’s heard of some athletes maintaining their strength with protein drinks or by preparing fruit and vegetable smoothies and juices, since some religions require only fasting from solid foods and allow for unlimited beverages.

Ramadan requires fasting even from water, though, so this technique is not useful to Mohamed. However, the Islamic fast can be broken as soon as the sun sets, which allows Mohamed a little time to recharge before the next day begins and his fast resumes.

“The fast is from the breaking of the dawn to sunset, (so) in July, the fast is from 4 a.m. to 9 p.m.,” Mohamed said. “The days are much longer and the nights are very short.”

This leaves him seven hours to hydrate and replenish his body’s supply of nutrients. Mohamed said it is key to drink enough fluids and plan out three meals for the night to help him get through the day.
“It got harder and harder as my stomach got smaller and smaller throughout the month,” he said.
“Every individual has to find the best time to train whether it is before the fast is over or before the fast begins or even during the night. The most important part to staying healthy and improving during the month is planning.”

Mohamed said he mentally prepares for the month by embracing it early and fasting one day per week.

“Physically, all I do to prepare is not overtrain,” he said. “At this point, rest is the most important aspect for me as my track season doesn’t begin until January.”

Resting doesn’t mean not running, though. It simply means running fewer miles with less intensity.
While this training schedule allows Mohamed to maintain his health during the month, it doesn’t necessarily prepare him for competition.

Even so, he said he has never felt pressured by his coaches to compromise his religious practices to stay on the team.

“The coaches allow me to make decisions and trust me to do what is best for me,” he said. “They know I have been observing the month my whole life and give me their support.”

Selgo said the athletic staff doesn’t interfere with students’ religious rituals or dissuade them from engaging in traditions. “We leave it up to the student-athletes if it is their practice to observe religious obligations,” he said. “Our training staff would assist them with education to ensure they remain in good health.”

The department even accommodates religious athletes by allowing them to miss training or competitions when they interfere with religious observances. “Our coaches would work with our student-athletes should any conflicts arise with religious obligations,” Selgo said.

He added that, to his knowledge, no concerns have been raised about the health of fasting athletes. “I’m confident our training staff would help our student-athletes with this should it ever be an issue,” he said. “I do know our staff works hard to make sure our student-athletes stay hydrated, which is important any time, of course, but more so if they are fasting.”

Mark Stoessner, head athletic trainer at GVSU, said rigorous fasting has never been issue in his six years at GVSU let alone his 27 years practicing athletic training. Nevertheless, he said he thinks accommodations should be made.

“I think a coach needs to be aware of a student athlete’s beliefs in the recruiting process and be willing to accommodate them,” Stoessner said. “I would like to think a student athlete who’s beliefs put them in a less than optimal state for a period of time would be able to expect some reasonable accommodations.”

One issue that Mohamed has encountered during his time running in college is that the dining halls don’t stay open late enough for him to grab food as soon as the sun sets.

“The athletic department could support Muslim student athletes during Ramadan by making sure that they’re getting enough to eat during the month of Ramadan by allowing Food services to accommodate to the month,” Mohamed said. “The only time we’re allowed to eat and drink is throughout the night and most of the dining halls are closed.”

Even as Mohamed struggles to ensure his strong nutritional status, he recognizes the pangs of fasting as a holy endeavor.

“Ramadan helps me become mentally stronger because I am running without the essential need of a human—food and water—and running with faith only,” he said. “It lifts me and inspires me to even work harder when I’m not fasting.”