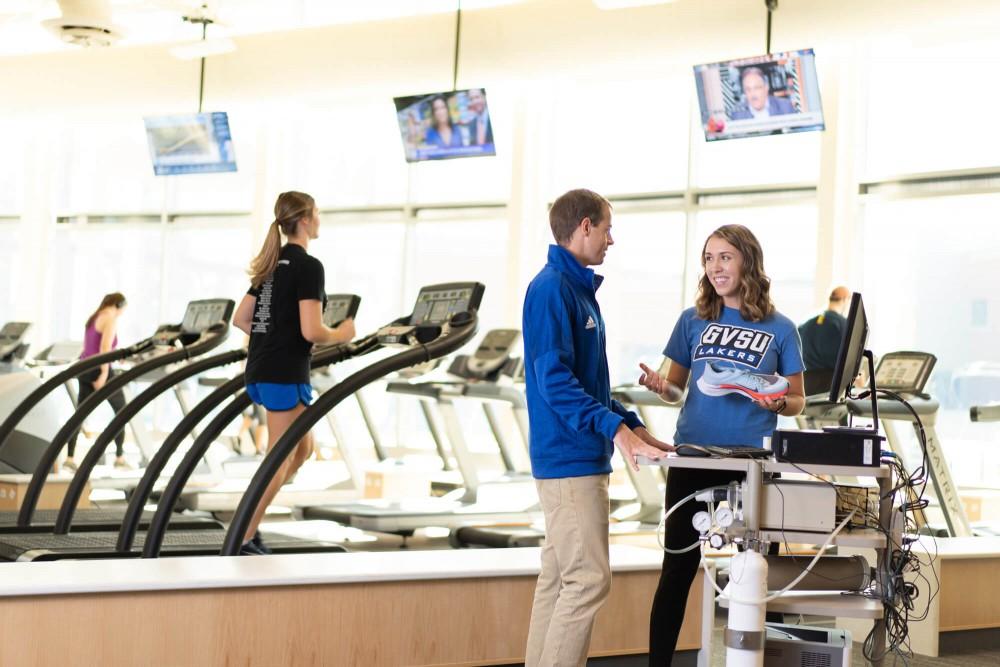 The idea for this research came to life when Nike came out with Nike VaporFly 4% shoes, which were advertised to improve running economy by four percent. With these shoes, Nike planned to have somebody break two hours in the marathon.

“It was interesting because the shoes are named the Nike VaporFly 4% and the 4% refers to our research,” Barnes said. “They claim that the shoes improved running economy by four percent. Without over-complicating things, my whole research line and what I did my PhD on is on strategies to improve running economy. So it was a natural fit and it was really interesting that you can take a shoe and improve somebody’s running efficiency or economy by four percent just by putting on a pair of shoes.”

To conduct the research, Barnes and Juzwiak have elite athletes run on a treadmill in the lab. The runners’ breath through a mask and are hooked to a metabolic cart, which collects expired gasses.

“We are testing elite athletes and they are running five five-minute trials in three shoe conditions: Nike VaporFly 4%, Sub-2 Adidas and a control shoe,” Juzwiak said. “We are using a metabolic cart to measure the athletes Vo2. Vo2 is the rate of oxygen uptake. This value will tell us the efficiency of the runner in each of the shoe conditions.”

“If somebody can run at the same speed as somebody else or in a different pair of shoes using less oxygen, that would make them more efficient,” Barnes said. “Just like in your car, if you can use less gas to drive the same distance, your car would be more efficient, or economical.”

The study is still in progress but will be completed in the next couple weeks. The research, while non-traditional, is also high-impact and interesting.

“Advice to the students and also to everybody else out there: myself and the exercise science/movement science department, we’re doing a lot of really cool things and people should be paying attention to what we’re doing because it’s very impactful to a lot of different people,” Barnes said.

This study exemplifies the many research opportunities at GVSU. Students who partake in research will gain experience that will help them both in and out of the classroom. Juzwiak said that this experience has provided her the trait of being a lifelong learner.

“My biggest takeaway has been to ask as many questions as I can,” Juzwiak said. “I have been so lucky to work with someone like Dr. Barnes, who has so much knowledge. The amount I have learned, and am still learning, about myself, the field and being a researcher is tremendous and I am so grateful for this experience. I know I will use these strengths I have acquired for the rest of my life.”